Skip to Content
A couple of years back, I found this pretty silver plated tray at a yard sale for 3 bucks WOOT WOOT! I knew it had the potential to be beautiful again but I wasn’t 100% sure what to do with it. It has taken me all this time to really mull it over and decide what I wanted to do. I decided to turn it into an antique looking mirror and it took an awful lot of trial and error, so I am going to share with you some of the things that actually worked so that you can maybe make one too if you’ve got an old tray kicking around that just needs a little TLC, minus all of the mistakes of course. 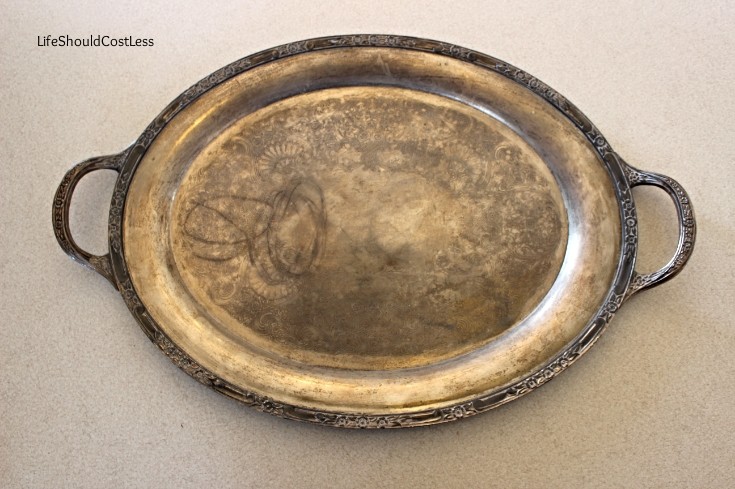 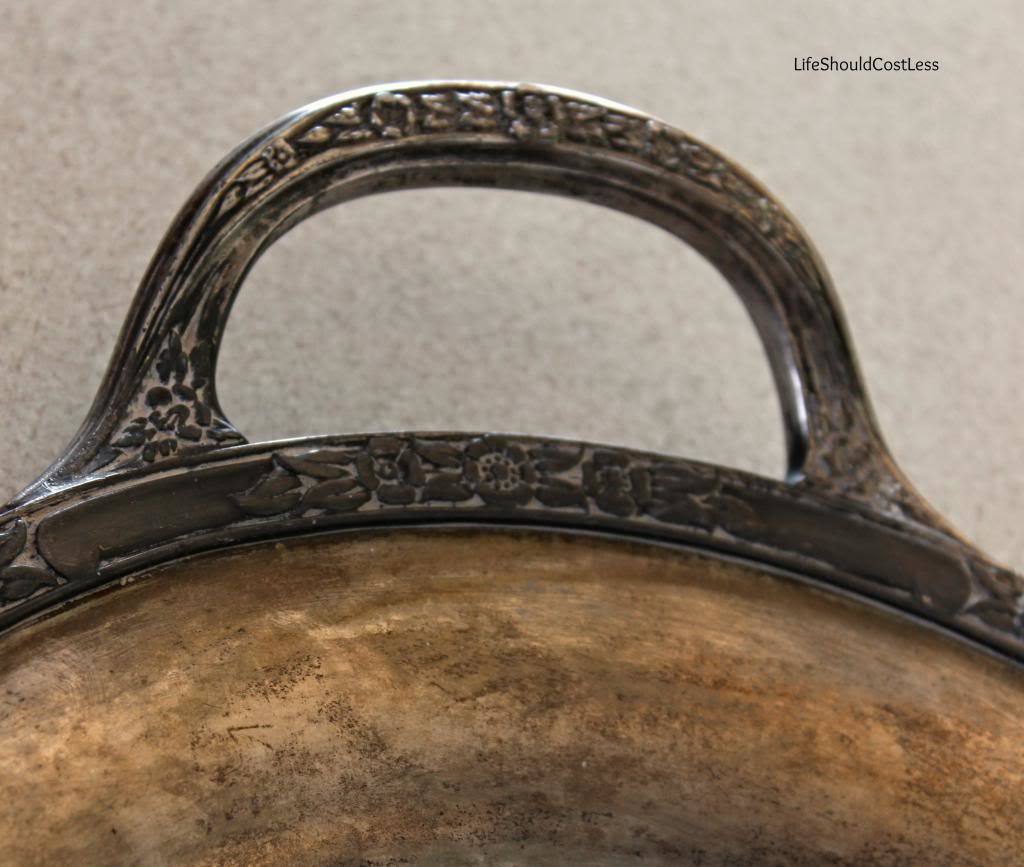 The first thing that I tried was to just polish the silver, minus the outer ring with the flowers. I like they way they look already. I was hoping that it would be shiny enough that it would work as a mirror by just doing that, but there was way too much of the silver plating missing for that to work…dang it! I had even  bought the best reviewed silver polish that I could find!
So, I had to do some more thinking about it and thanks to the internet, I found a video tutorial on how to make an antique looking mirror out of a piece of glass. This appealed much more to me than finding a mirror and using that muriatic acid stuff to make it look old…it just seemed a little safer. Anyway, that ended up being the way that I decided to go but I also decided that I would need to learn to cut glass and find a cheap source for the glass in case I messed up (which I did…several times). So I decided to check my local Dollar Tree and lo and behold…they had some 11″ x 14″ frames that were just the right size to cut to fit my tray.

Next, I went ahead and bought a glass cutting tool. The directions on the back of the package were all the instruction that I needed, but I thought I’d provide you a link for a youtube video that show you the basics for glass cutting. I made a template for the tray by creasing a large piece of parchment paper into the edges of the tray bottom and then cut out the part that I had traced.
Like so: 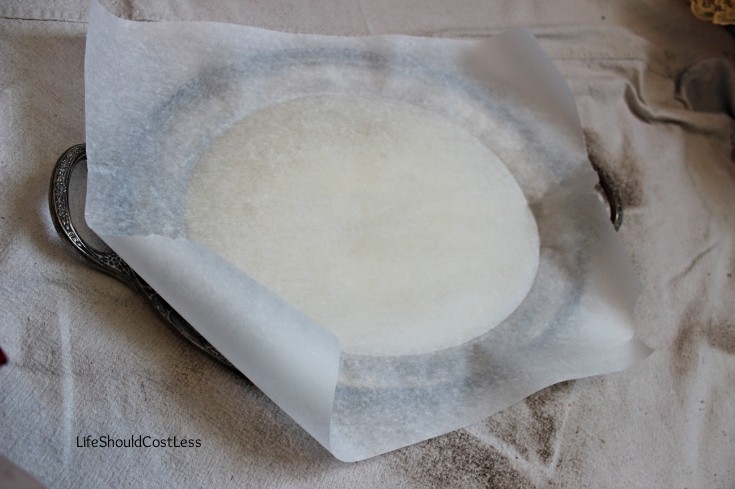 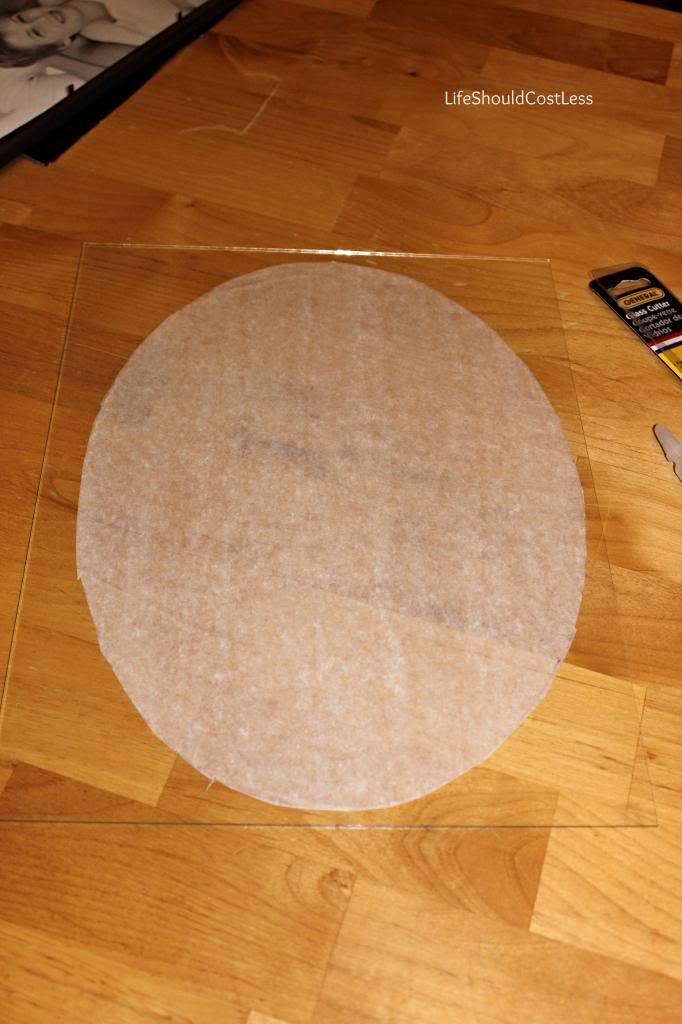 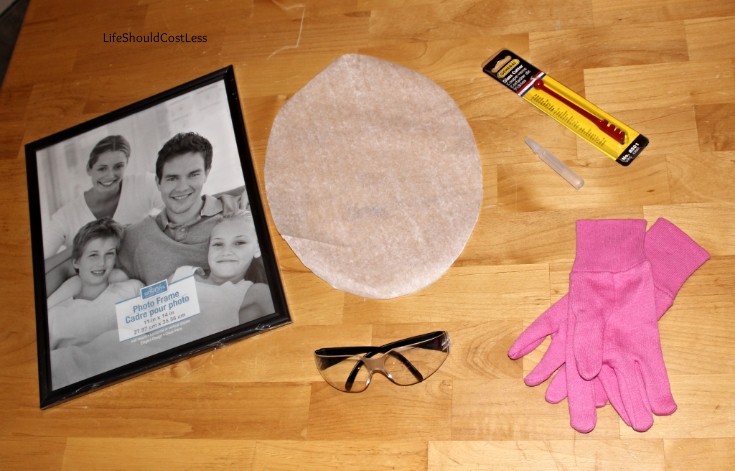 To do the actual cutting I used some gloves, safety glasses, the glass cutting tool, & some sewing machine oil (I found that it works best to oil the cutting wheel after every cut). Make sure you do it on a hard surface…otherwise the glass won’t cut right and you’ll have to start over…I know this from experience. I was sitting on the floor of my office/sewing room trying to work on this and wondered why the glass kept cracking in the wrong places…DUH! Well at least now I’ve got some hind-sight experience under my belt in glass cutting. Once the glass was cut to size I had to turn it into an “antique” mirror.

In case you missed the link I provided earlier on this, here is that tutorial that I previously referenced to for this part. The only thing I did differently than in that video tutorial is that instead of using a black backing I used some cheap black spray paint and gave it a good thick coat.
I’d say that the most crucial part of this whole project is to make sure that the paint has cured properly.

I was being impatient and rigged up my Hood Dryer

Once it had cured properly, all that was left was to attach the mirror to the tray. I wanted to go a semi-permanent route so that if I ever want to get the tray re-plated in silver I will still have the option (I’m big on making sure that things can still be used for their intended purpose).  I thought about trying some high temp hot glue again like I used for my How to Install Antique Door Knobs as Drape Tie Backs post, but the surface area would be too big and the glue would have dried before I could get the mirror in to place. So I ended up going with some super strength craft glue dots, found here

. I found it works best to put them on the tray and then add the mirror rather than putting them on the mirror (which can cause the mirror part to start to peel off if you’re having a hard time getting the glue dot to stay in place…another thing I learned the hard way). Anyway, minus my oval not being 100% perfectly cut, I am pretty happy with how it turned out. Not bad for my first experience with cutting glass and making antique mirrors.
Here it is! 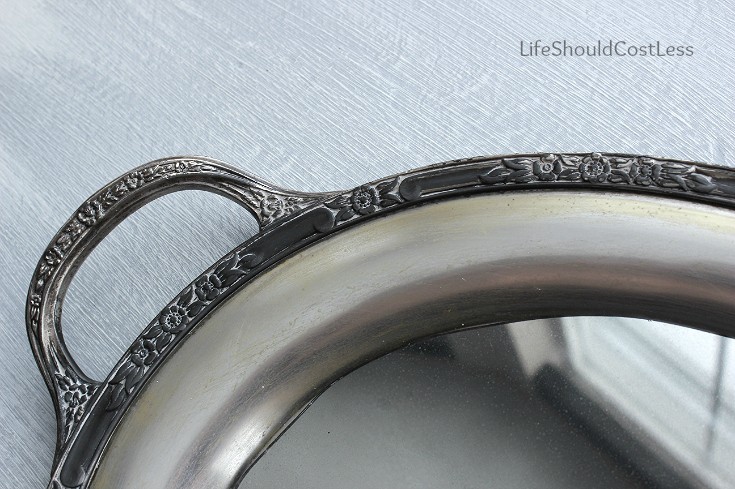 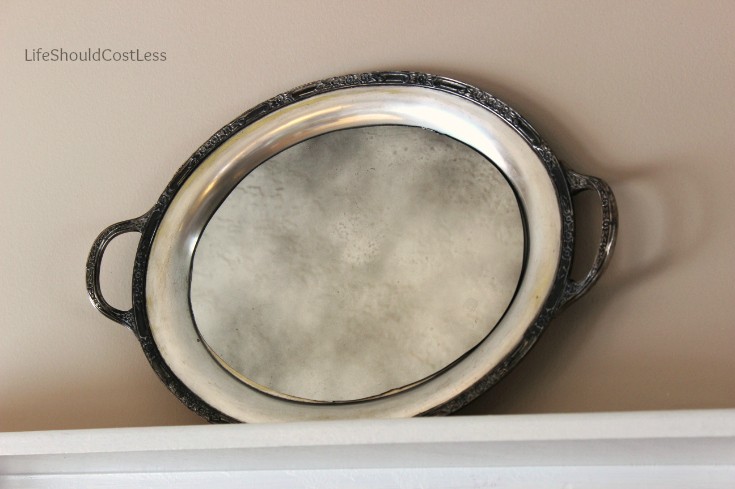 Now to decide where I want to keep it permanently. In case you’ve forgotten, here are the before and afters again.