My Results: No Eating After 8 pm For Six Months

*This post was really hard for me to write, so please be kind.* 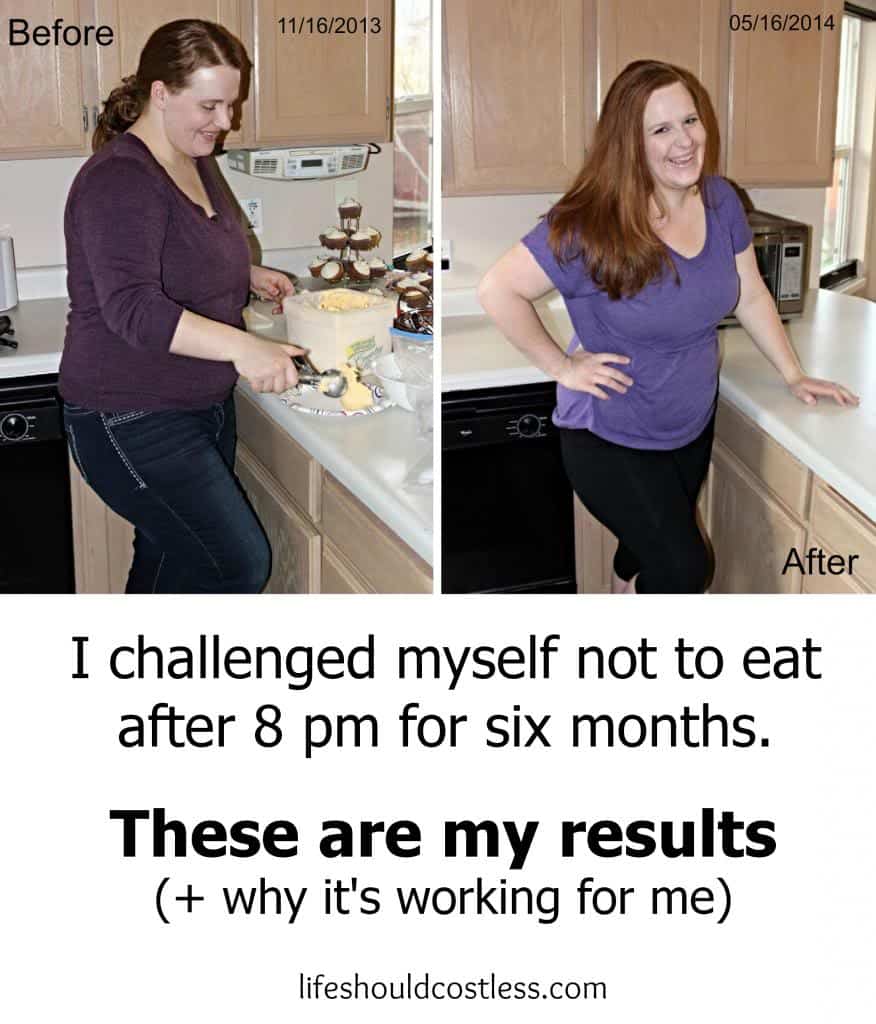 I first heard of not eating after 8 pm to lose weight from a friend named Kaiti. I wondered what she was doing to look so fit (she looked as good if not better than she did before her 2 kids) and she told me that she and her husband had been not eating after 8 pm for the past couple of months.
I decided that I was going to give it a try and so I did, but I kept wanting to lose more weight even faster. I had many, many lbs to lose so I would bump it down to like 6:30 pm every night. I was starving by the time I went to bed, usually around 11:30 pm. I was able to lose about 10 lbs that first month doing it this way, but then became pregnant with my third child and obviously had to stop dieting.
Fast forward to about six months after I gave birth, I was able to get most of the pregnancy weight off, but I was still really having a hard time getting the extra weight off. I had actually broken down and bought a brand new pair of pants(so I could finally get out of the maternity clothes) into what I consider to be “my super fat size” and I had to grunt to get into them.  This kind of set me off, and I was determined to find a way to get the weight off without having to count calories, or points, or feel overly-restricted every single day.
I refuse to count calories. Life is too short to have to worry about every little thing that I eat and then feel bad about myself if I go over. I needed to find some other way to cut myself off or know when to stop.
I remembered the 8 pm thing and thought that I’d give it another try. However, rather than rushing the weight loss by trying for an earlier time every day and feeling like I was starving the whole time, I decided that I needed to just do the standard 8 pm but that I’d need to set a goal. I don’t weigh myself anymore, another thing I find way too restrictive, so I couldn’t go off of pounds lost and had to figure out another way to measure my progress. I was actually looking at a very inspiring gif of a girl that lost 88 lbs over the course of a year and it hit me… “ok, this took her a year of consistent habit changes and she really didn’t show the most progress until the last half of the year”. I told myself. “I need to make a consistent change, for a significant amount of time.” That is really the only way to measure long term progress anyway. I decided that I owed it to myself to make this a healthy habit for six months and then re-evaluate when I got there.
I started not eating after 8 pm in November…just after the Halloween candy binge, but just in time to help me get through the rest of the holidays. I had some sweets, but not eating at night kept it in check from becoming out of control. I was actually pleasantly surprised to find that I was slimming down through Thanksgiving and Christmas but then I caught a snag in January (when I lost my grandpa and husbands uncle in the same week). My progress kind of halted because I was stress eating. I decided to cut sweets for a bit, but that began to feel too stressful so I stopped doing that and just kept myself in check a bit better. Well, here it is six months later and I am really excited that I am starting to get my hourglass figure back. Just looking at my pictures (and fitting in to clothes a couple sizes smaller) I can see my progress. Not to mention I’m starting to feel less self-conscious about my weight. That’s really all I want…to be comfortable in my own skin. I don’t ever want to be super skinny, I just want to feel healthy.
Not eating after 8 pm works for me because the end of the day is when I did the majority of my stress eating. This works for me because I ate my feelings, I’d have a hard day and then medicate with food. That’s when the kids are all in bed and I actually have time to worry about things. Since then, I’ve had to learn to deal with my problems rather than just eating them.
Things I noticed about the challenge:
Things to remember for success:

My top reasons why I want to get my weight under control:

Before I set the goal and decided that it was going to work for me, I started paying attention to just how much I was eating after 8 pm.  That was sure an eye opener. It was usually between 500 & 800 calories (minimum per night) and if it had been a particularly hard day that triggered a binge…probably like 3k+ calories…gag…I know! It’s really embarrassing, but people need to know just how much it all adds up. You don’t get fat in one day.
8 pm, the time, works for me because of how late I go to bed. Remember, I told you that I go to bed at around 11:30 pm most nights. Dr Oz suggests not eating at least 3 hours prior to bed… So basically, just determine your average bedtime and then stop eating at least 3 hours prior to that every night and that should do it…as far as developing it as a new habit goes. I do suggest having a firm time set though, it keeps you more accountable rather than telling yourself “oh, I just ate a ton of food…I better stay up three more hours so that I can say that I hit my goal for today”.
This experience has given me something invaluable. I finally feel like there may be a day that I’ll be able to buy a fitted dress and it’ll actually fit for more than a couple of weeks.  I’m  just about able to fit into my wedding dress again, and it didn’t fit a month after I got married.
Now that I’ve done this for six months (with only a handful of days with minor mess-ups+ a girls night), I am setting a new goal for three months and then I will re-evaluate again when I get there. Wish me luck!
Side-note: A little history of me and my struggle with weight management, it’s at the bottom because I realize most people don’t want that much back-story or were done reading a while ago:
I struggled a little with my weight as a teen, I was almost always within 10-20 lbs of a healthy weight for my height and build.
Fast forward to a little after graduation, I moved to Washington state briefly, gained a bunch of weight because I was home-sick, moved home, the weight fell off and then I got married. I got in a really bad, 7+ year, funk starting a couple of weeks after I got married. I was so home-sick that I cried every single day for at least a year (I’m not exaggerating either, it was bad).
Living in the city also gave me incredible anxiety. I can’t even fully describe it, but let’s just say that this country mouse was not meant to ever try to become a city mouse. That is when my weight got so out of control and I have struggled with it really hard ever since. I became what I call “one of the living dead”. So un-happy and lost in my own problems that I was basically just a zombie…a very fat zombie.
I couldn’t see a way out of my problems so, I guess I just tried to eat them. Before I knew what had happened, I had become, by definition, a binge eater. My level of self-consciousness was off the charts too,  I wore a sweater everywhere and everyday trying to hide myself. Only now can I see that it was an adult security blanket. I even missed out on weddings, family reunions, and keeping in touch with friends because I was that insecure about myself. I’d say that I was just one step less self-conscious than the mom off of “Hairspray” that doesn’t leave her house for like ten years because she was ashamed of her weight.

Previous
How to make a pickle style clutch/emergency bag, from scratch. 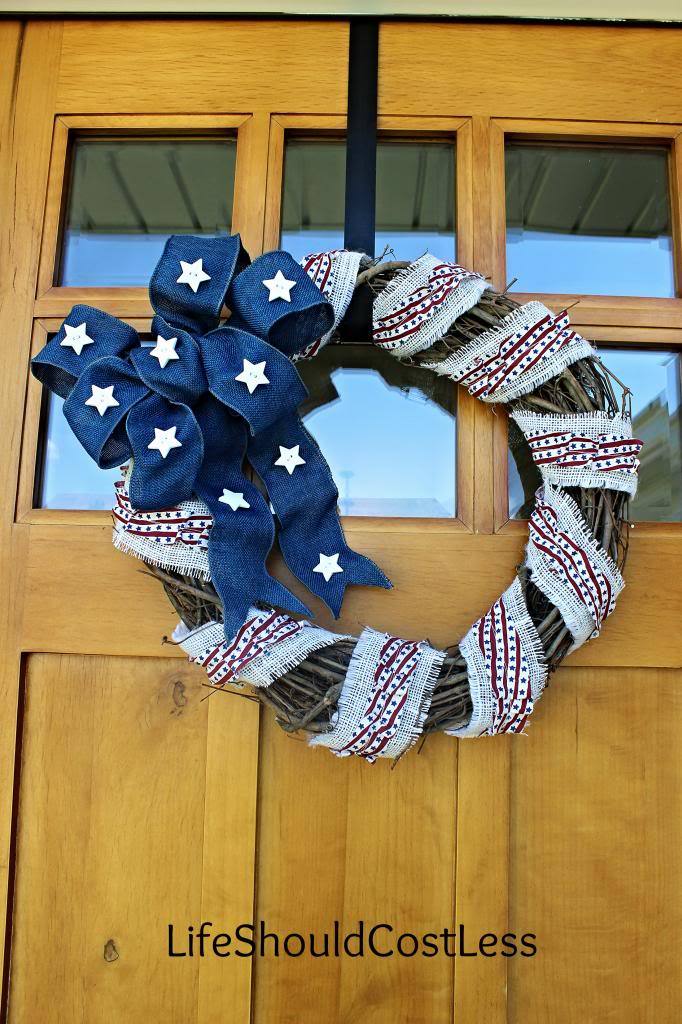 Next
Burlap Patriotic Wreath For Summer, With Basic Tutorial
Comments are closed.