Antique Doorknobs as Drape Tie backs, How to install them

When I first saw the idea of using antique doorknobs as drape/curtain tie backs I knew it was something that I wanted to do. They are so classy! So, I decided to start pricing them out. Holy cow! The styles that I love are SO EXPENSIVE…even on ebay. On a whim I decided to check and see if I could find anything on Etsy. I’m so thankful that I thought to check there. I came across a cute little shop called Riverhouse Designs and found these beautiful doorknobs (still in working condition). 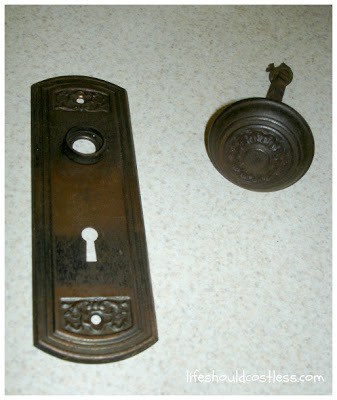 I am in LOVE with these doorknobs. The price was about half of others I could find anywhere else. Also, they came packaged beautifully(gift-ready). Jen, the shop owner, has been awesome to work with! Anyway, enough about where I got them, because I could go on all day about how happy I was with the transaction.
My next step, was to decide how to install them. Obviously, the strongest hold would be to have the shafts welded to the back plates, but the thought of damaging them to the point that they could no longer be used for their intended purpose just breaks my heart… I’m a sucker for antiques. Plus, I may want to use them for doorknobs one day. The brainstorming began and, finally, after a fair amount thinking and talking about it(for a couple months), I had a plan.
Here is how they turned out: 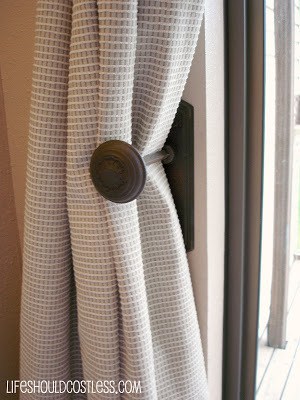 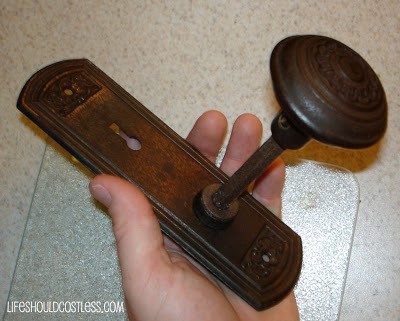 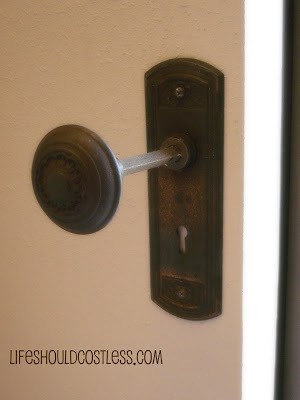 Keep reading if you’d like to see what I did step by step.
I had already bought the doorknobs and decided that I was going to need to buy some extra shafts (pictured below) so that I wouldn’t harm the original ones.  I found these at George’s Salvage. He was also great to work with and I will definitely go back when I do my next set of these. 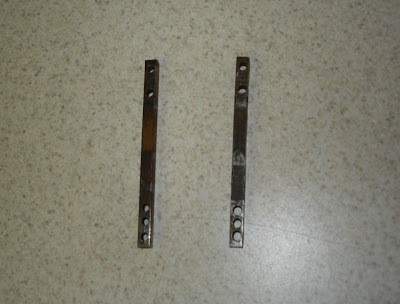 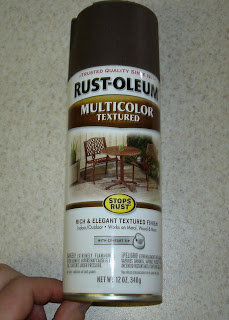 I used this spray paint (I matched the color by taking my doorknob to Home Depot with me) and painted them, then flipped them and painted the backs as well. 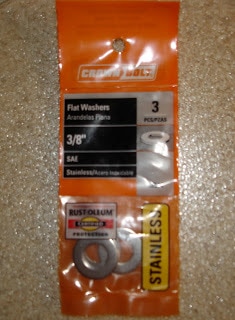 These are the washers I found to cover the gaping hole where the shaft and back plate meet. I made sure that the opening in them is large enough that the shaft fits inside, but there shouldn’t be much wiggle room. These were painted at the same time as the shafts but only on one side. 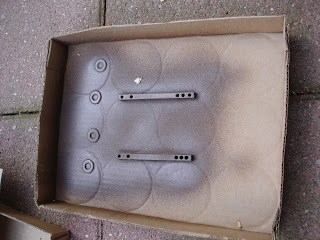 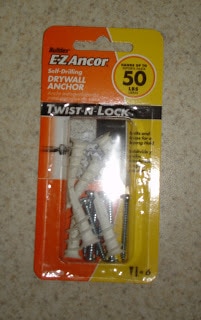 If you decide to do this as well, obviously you don’t have to follow everything I did and in which order, but I got all of my painting done at once to save some time. The next thing that I painted was the ends of these screws. I got these to anchor the back plates to the wall itself, but if I were to do it again I’d use a different product…this product left a MUCH larger than needed hole in my wall and two of the anchors broke off in the hole even though i was being very careful. 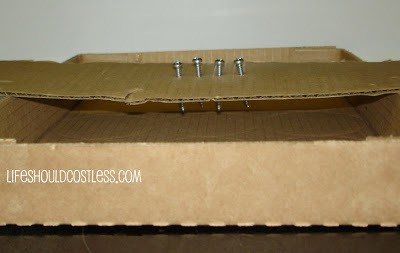 I only needed the tips of these painted so I poked them into some cardboard and laid it across my painting box.

I used a cotton swab to even out the paint that sank into the holes where the drill bit needs to go. It took two coats of paint on everything.
Next, Assembly.
I used a High Temp Hot Glue Gun

(must be high temp when you are trying to bond metal to metal) This was my friend Courtney’s suggestion…and her glue gun. Thanks Courtney! Hot Glue was decided upon because of my wanting to preserve the original/intended use of the doorknobs. I found this video that shows you how to get hot glue off of pretty much anything. Anyway, I was a bit skeptical at first about using it, but it is surprisingly sturdy (so long as my kids don’t try to hang on them) even if they did it would be a 5 minute fix. 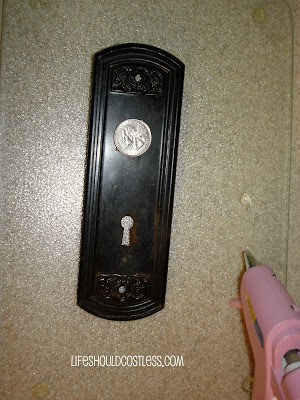 This parts a bit tacky, but it’s on the back and it worked. I needed something to anchor the shaft to the back plate so I glued a quarter onto the back as it was just the right size. 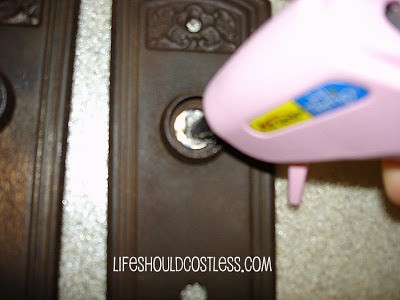 Next, I flipped the plate back over (right side up) and placed a dab of glue in the direct center of the quarter and quickly placed the shaft on top. 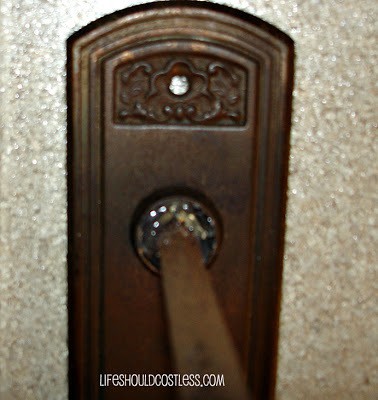 Then I filled the rest of the hole around the shaft up with glue and let it cool/dry. 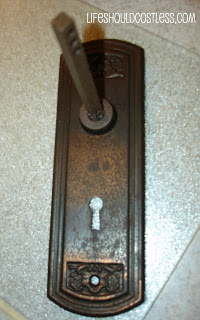 The next step was to cover that gaping hole by gluing the painted washer on top …pictured above. 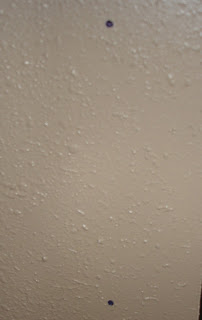 Next, I decided where I wanted them and marked the holes with a marker. 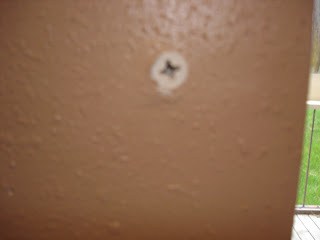 Drilled in the anchors.

Put in the screws and added the knobs(I used the original screws for the knobs). And there you have it. 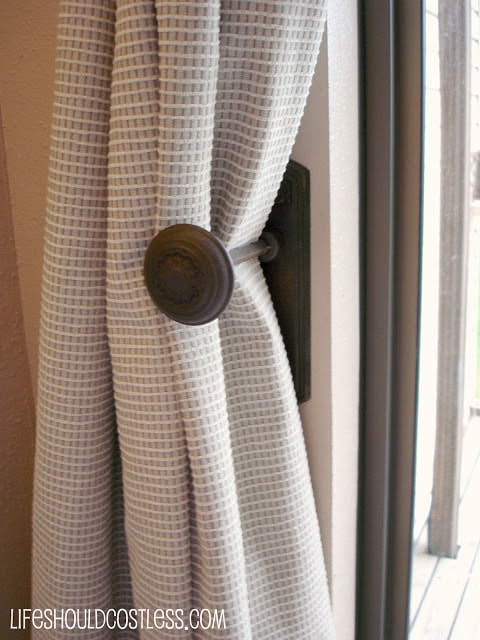 *Update, I just wanted to let you all know that the hot glue was still going strong a couple of months after I did this project. It wasn’t until my neighbors kid came over and hung on them that I ever had any problem with them coming loose. 05/03/2014* 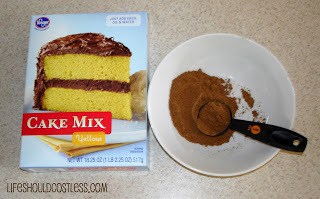 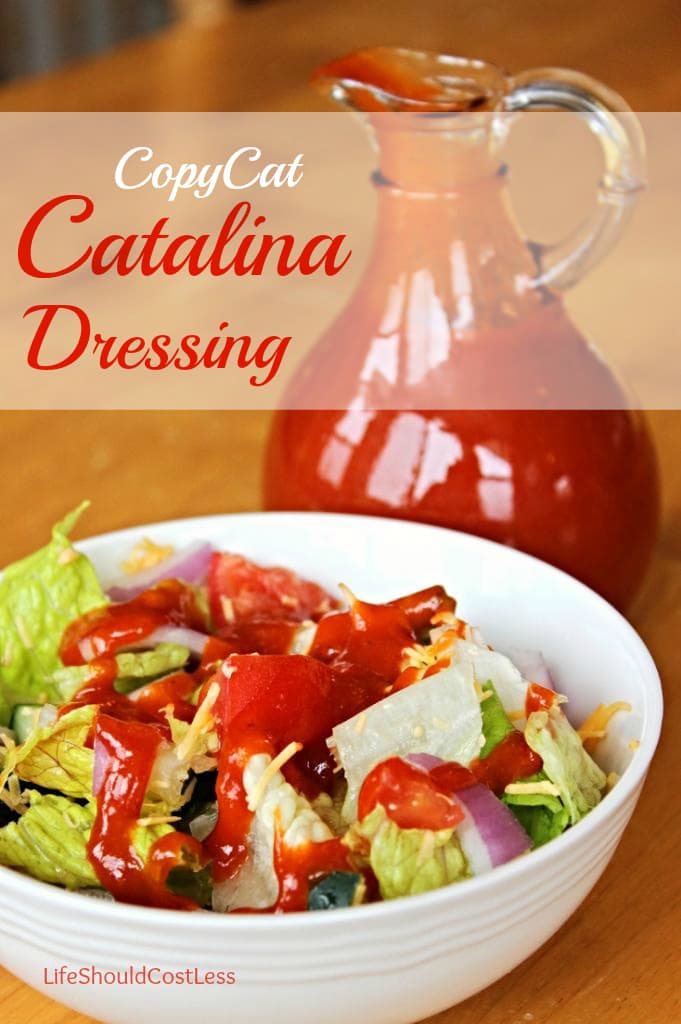