If you’re looking for a nice,  stick to your ribs, kind of meal to warm you up on a chilly day, this is easily one of my favorites for such occasions. It takes about 20 minutes of prep, and that is not bad considering that it is mostly a “from scratch” meal. I will also give you the directions for a less healthy but even faster version so that you can make that instead if you’re really pinched for time. 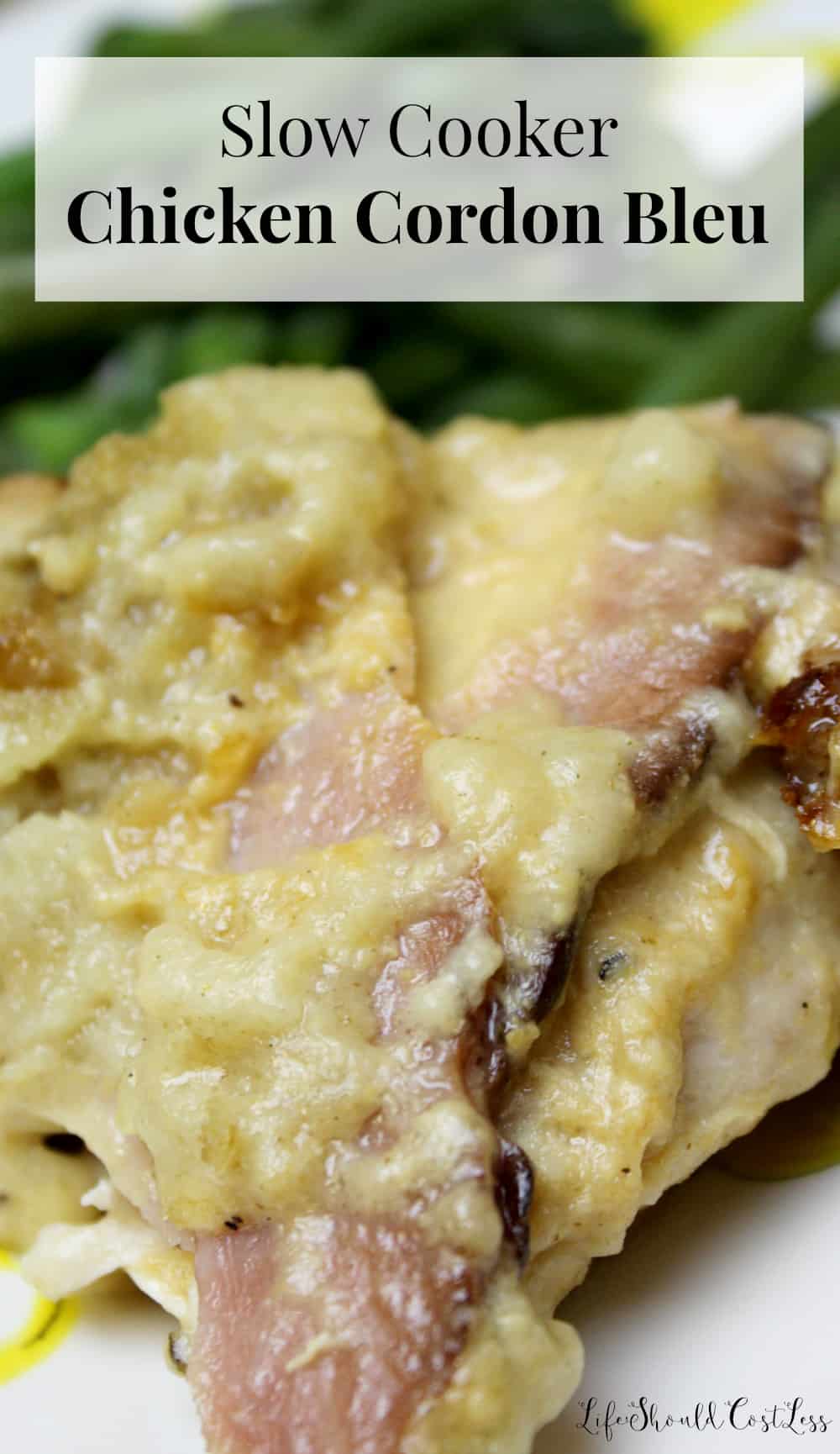 I’m going to start out by giving you a little bit of an update, just a paragraph or two, on what’s going on in my life. Sometimes I feel like I am way too formal with my blogging and I am trying to get out of that habit and let you all in a bit…within reason, of course.

Anyway, life has been crazy this past year. I’ve moved twice, gotten divorced, had a breast cancer scare, learned to parent four kids solo, found out my ex husband has a terminal illness (he’s ok for now), a couple other major hardships I can’t share, and it has been really rough year, but there has also been a lot of good too. I was able to buy a home for me and my kids, last month, and we are settling in nicely. I’m dating someone and he’s pretty great, he puts up with my crazy so that is always nice…I just feel bad for him having to put up with me ;).

That’s about it, as far as a personal life recap goes for the last year…and now I can get on with the rest of this recipe. I’m going to start out by showing you via pictures how to make it or tell you what to do if you may not have something, and then the recipe card can be found at the bottom.

Here is a picture of the ingredients that are used to make the cream of chicken base. If you don’t want to make the sauce in my recipe you can swap it out with a family sized can of cream of chicken, but I would suggest adding in a tiny bit of water to it to make it a little more runny. 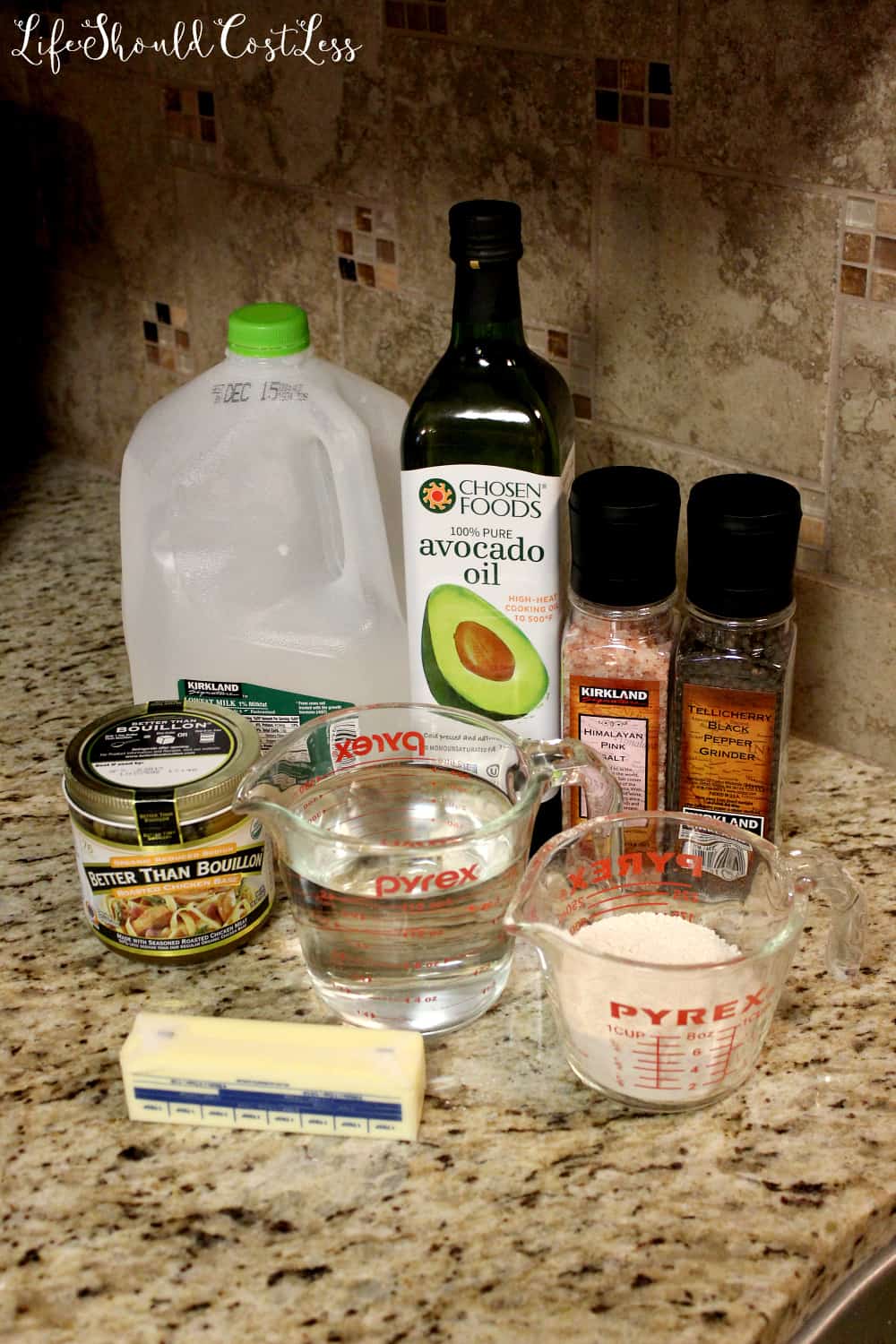 If you’re unfamiliar with Chicken base, this is what I use. I get mine at Costco (it’s also found here on Amazon), but you could always swap it out with a boullion cube or two if that’s all you have. 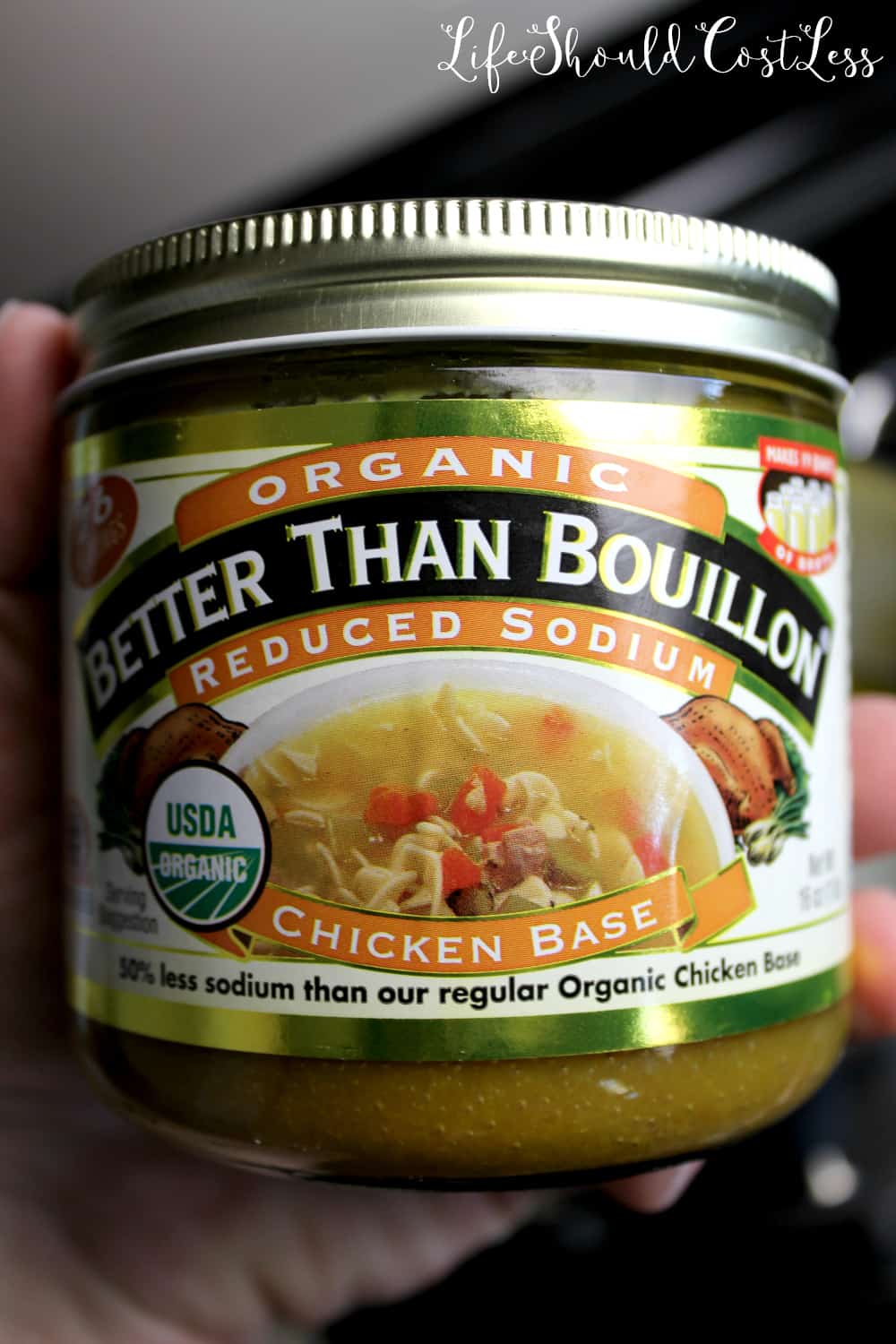 What the cream of chicken/sauce mixture looks like when it’s done. 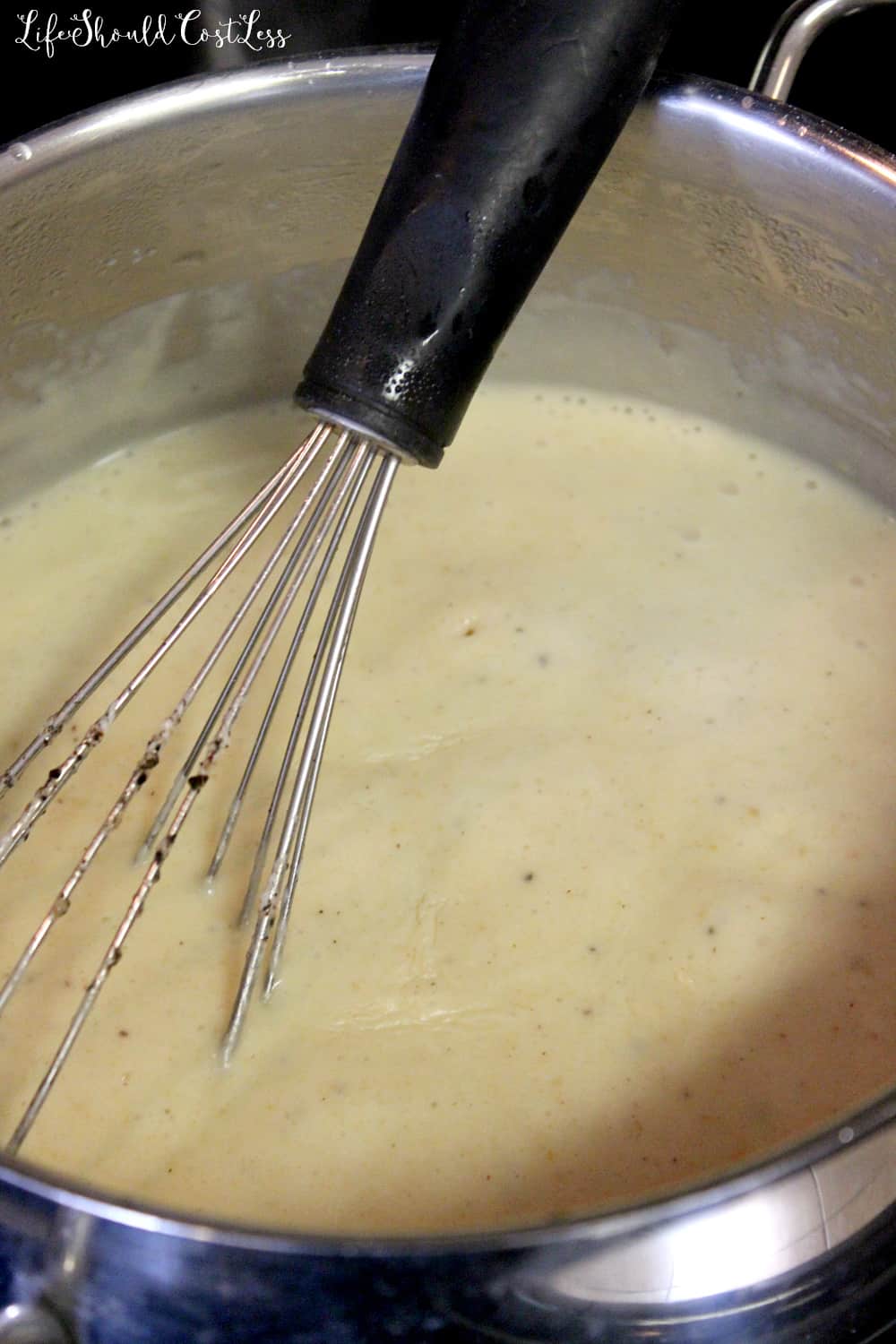 Next, I show is all the ingredients used besides the cream of chicken/sauce mixture…just so you know what I’m talking about. 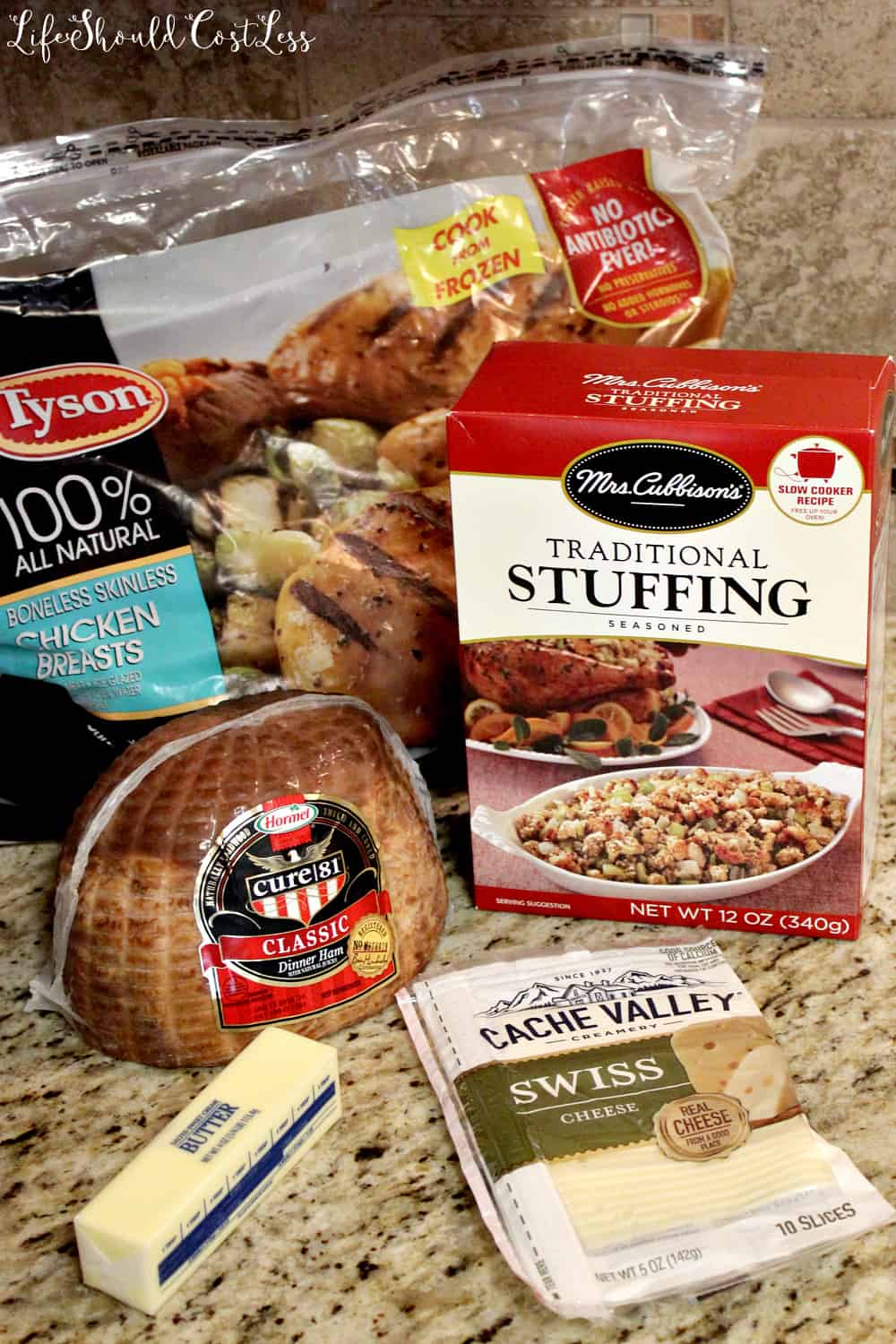 Ok, now here’s how to assemble it in your slow cooker. I use this seven quart CrockPot and I love it! I grease it and then put half of the sauce in the bottom. 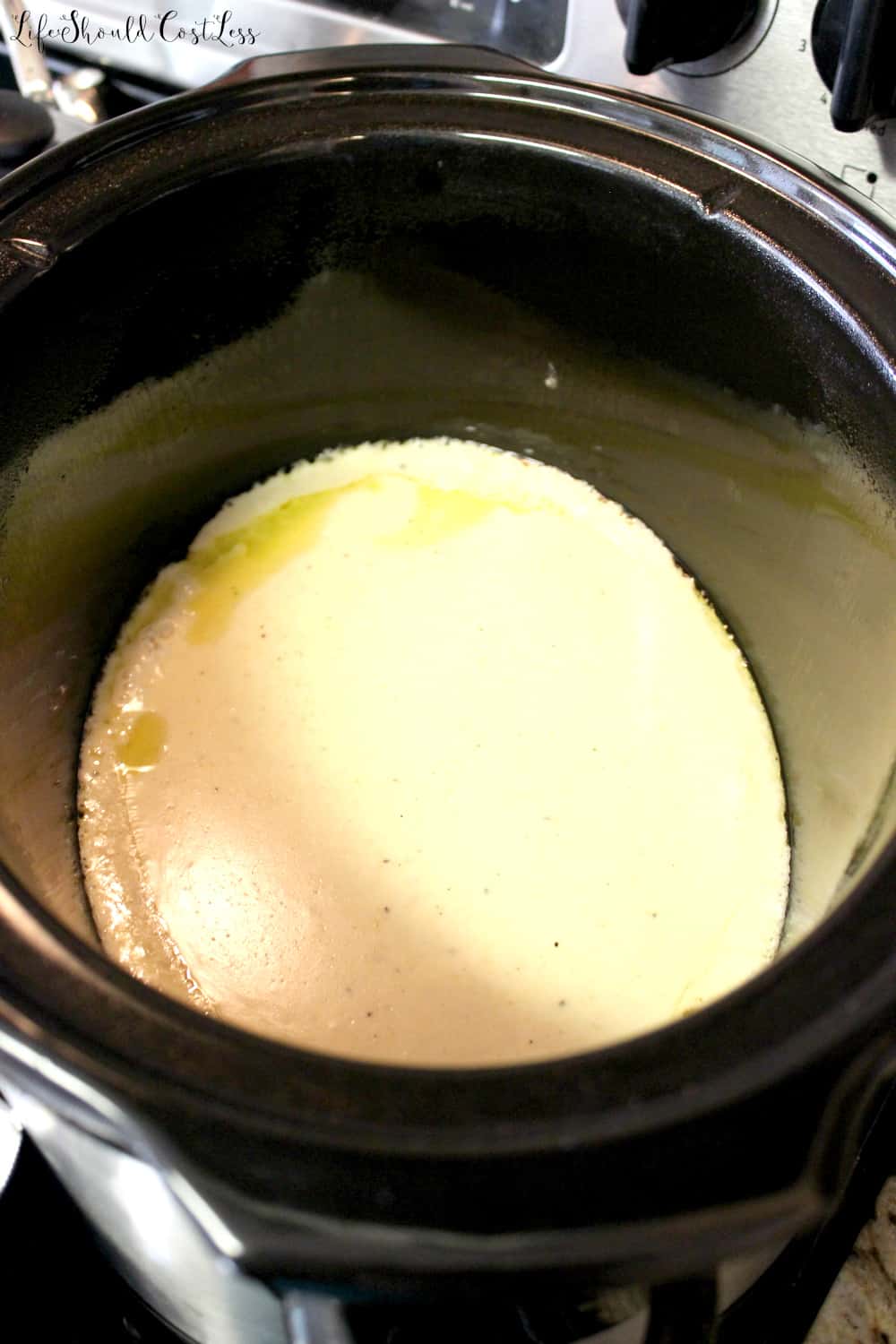 Then a layer of frozen (boneless) chicken breasts. 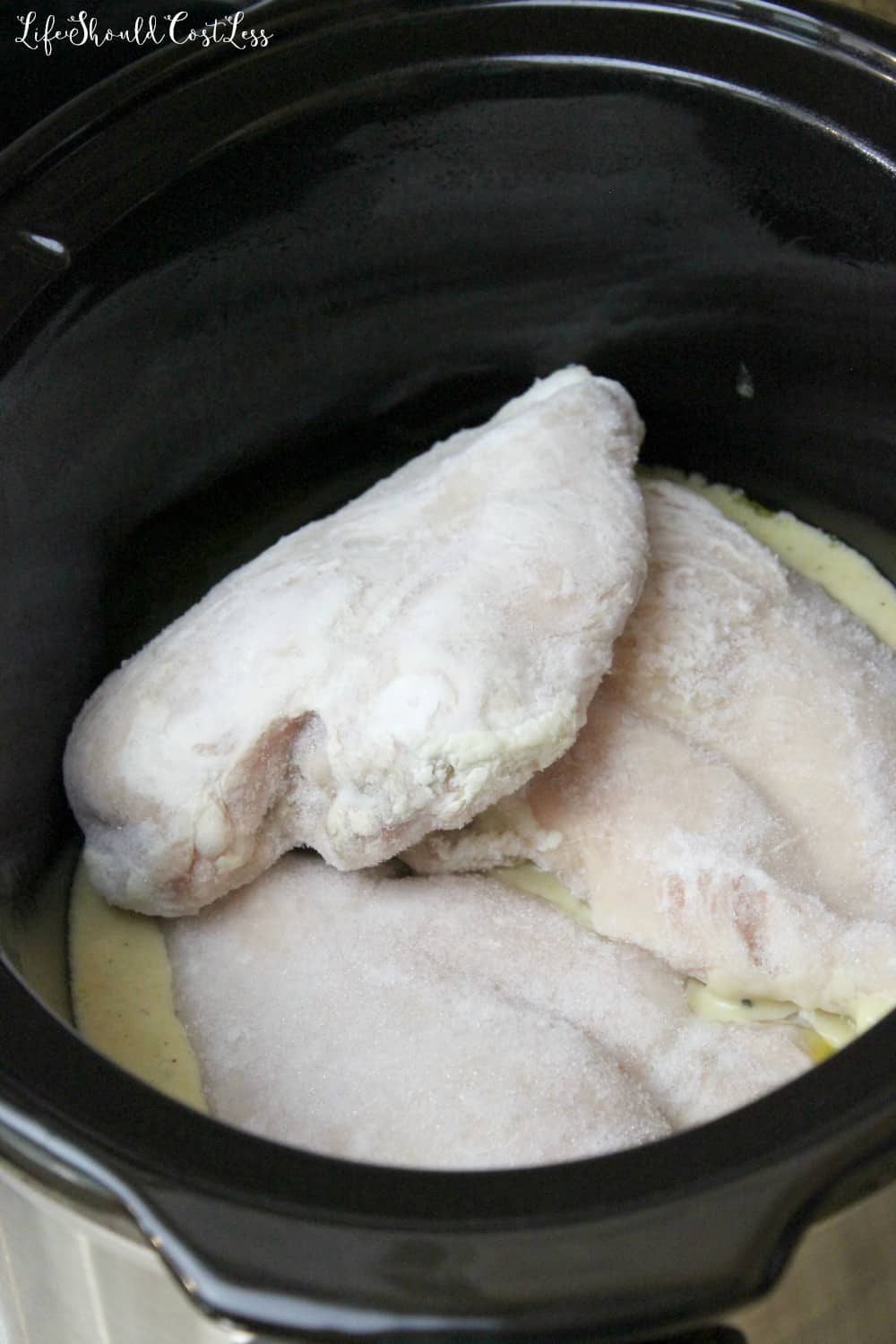 Then a layer of ham. I like to cut it pretty thick, but you can cut it as thick or thin as you want. 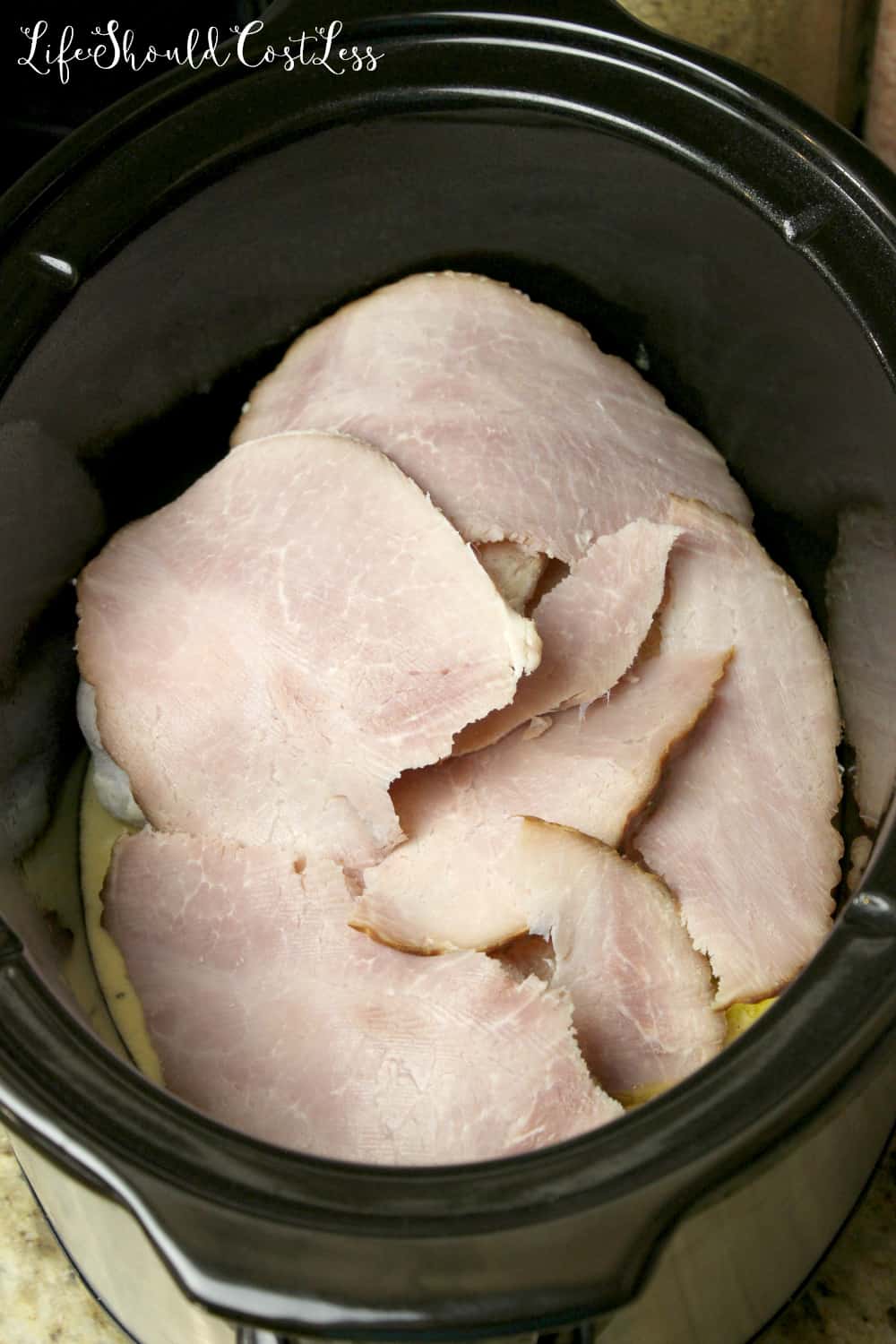 Next is a layer of swiss cheese. I use the pre-sliced kind and you can also make this as thick as you want to or as thin. 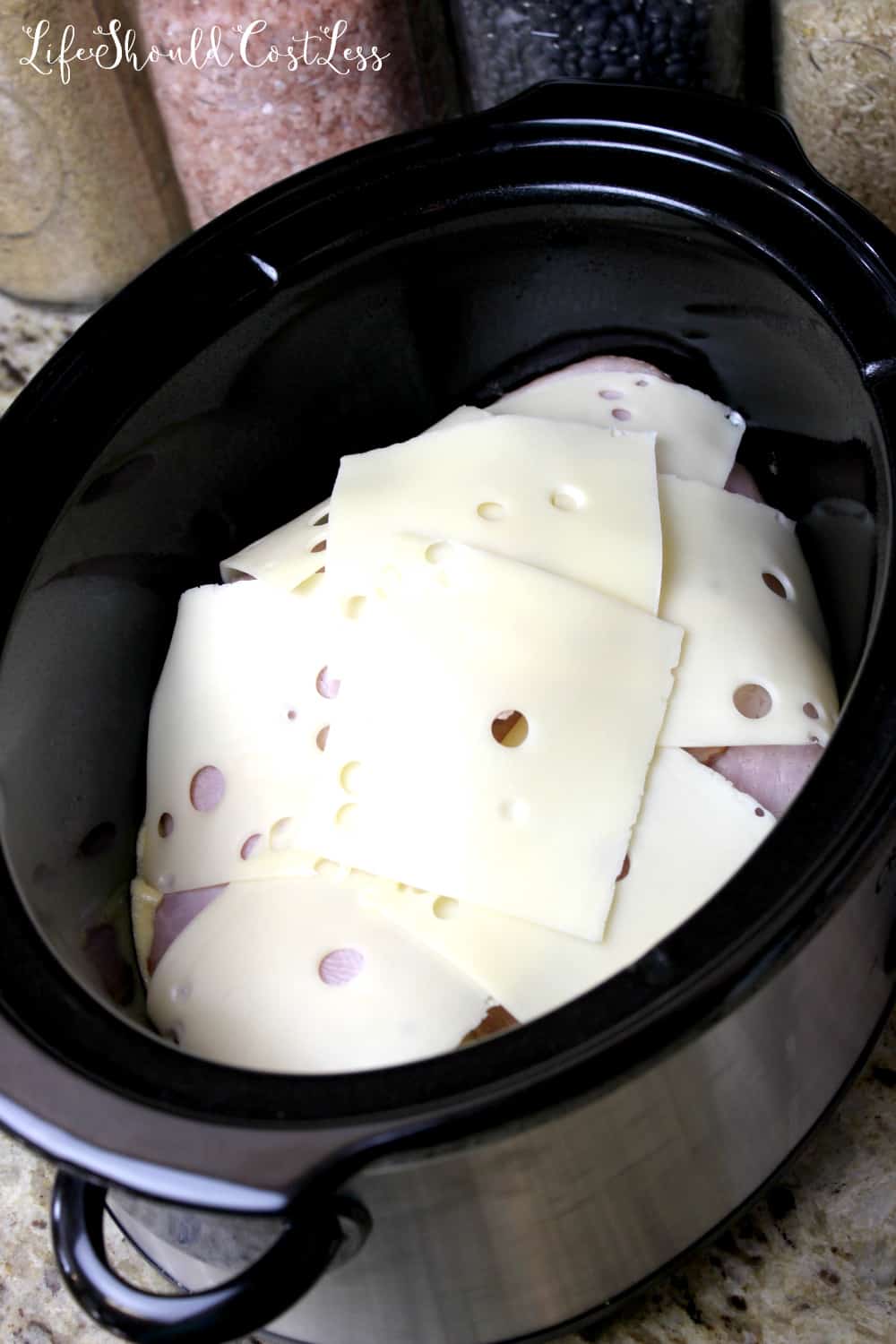 Next goes the rest of the sauce. 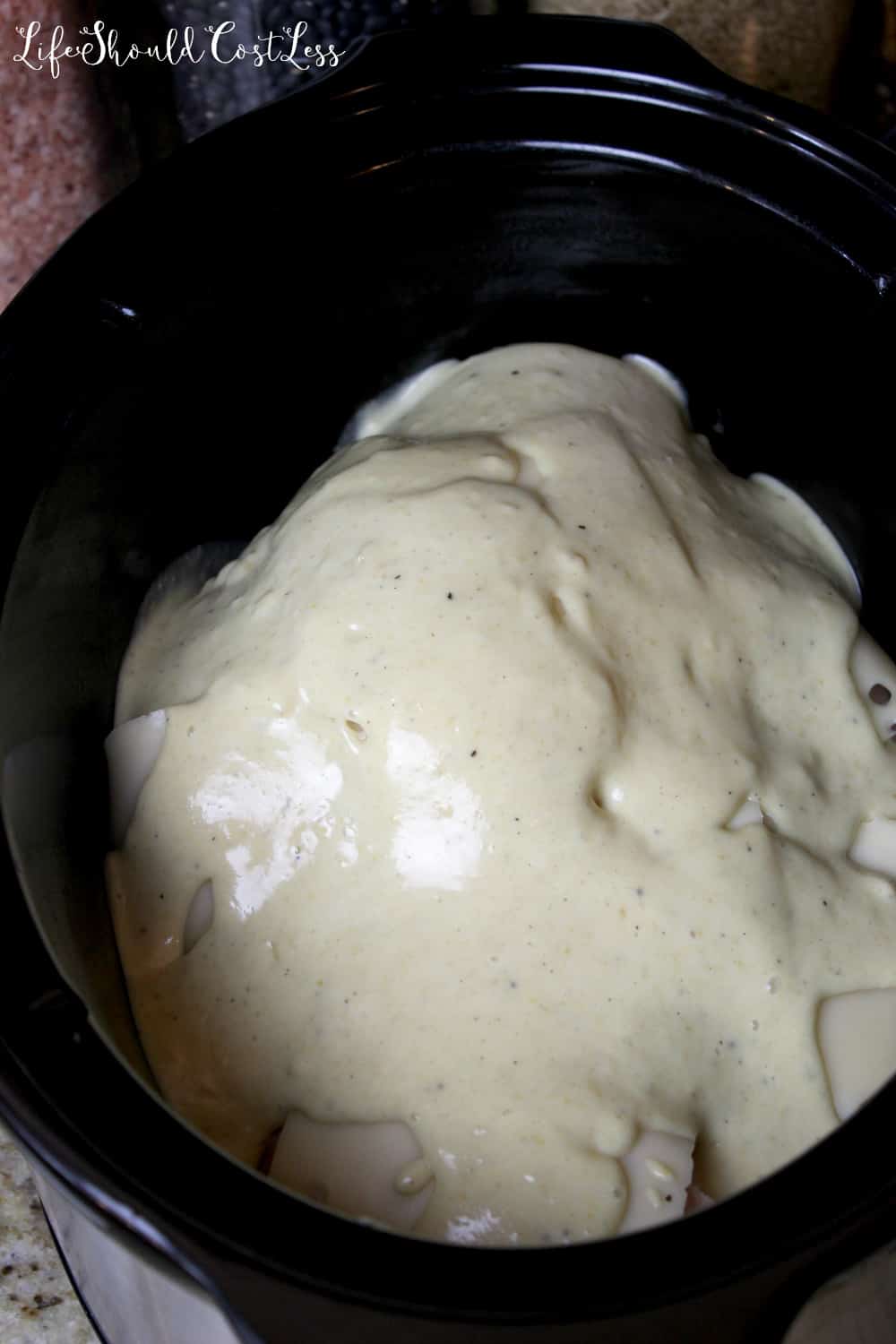 I use half of a package of herbed stuffing and spread it out evenly. 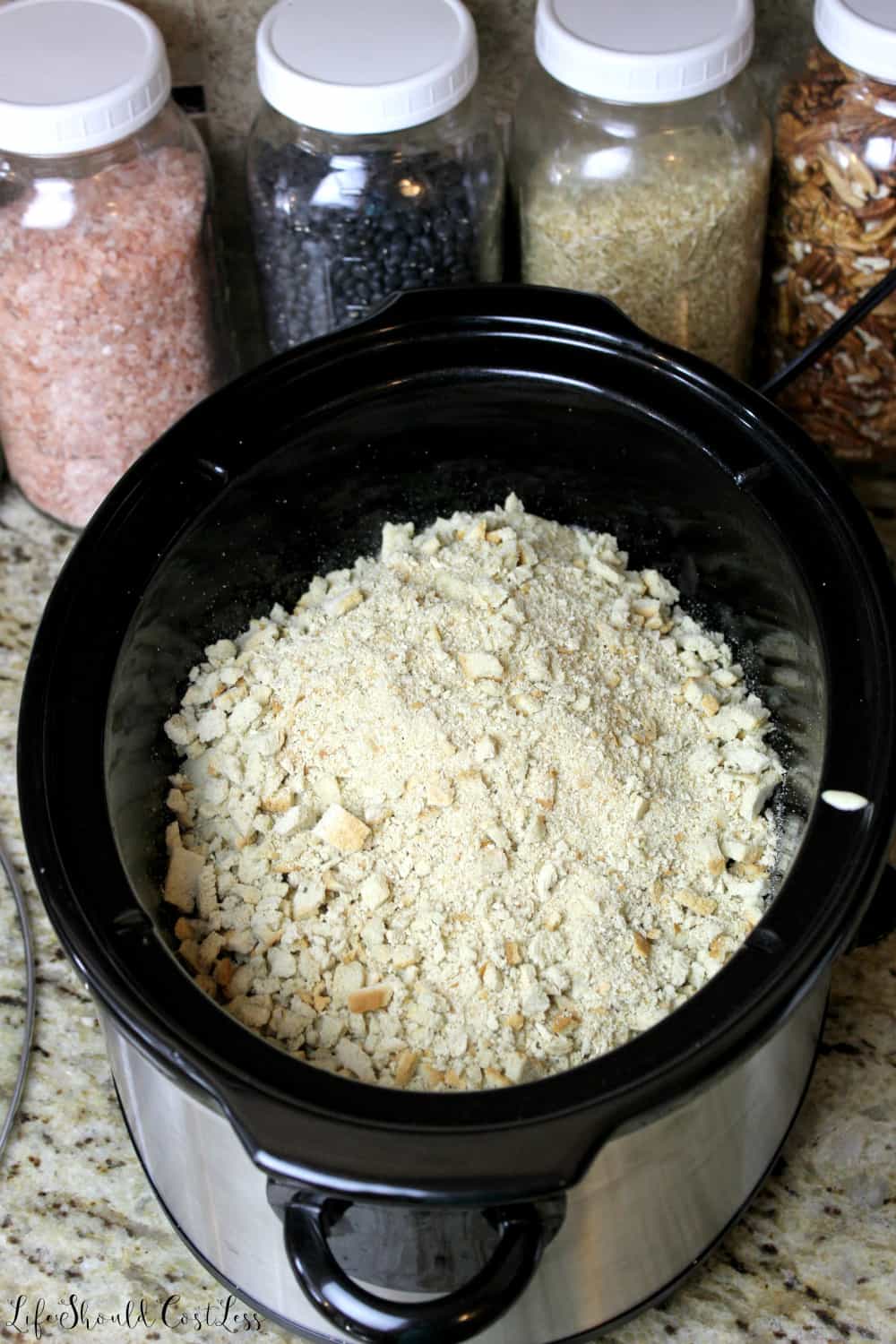 Then melt half a cup of butter and pour as evenly as I can. 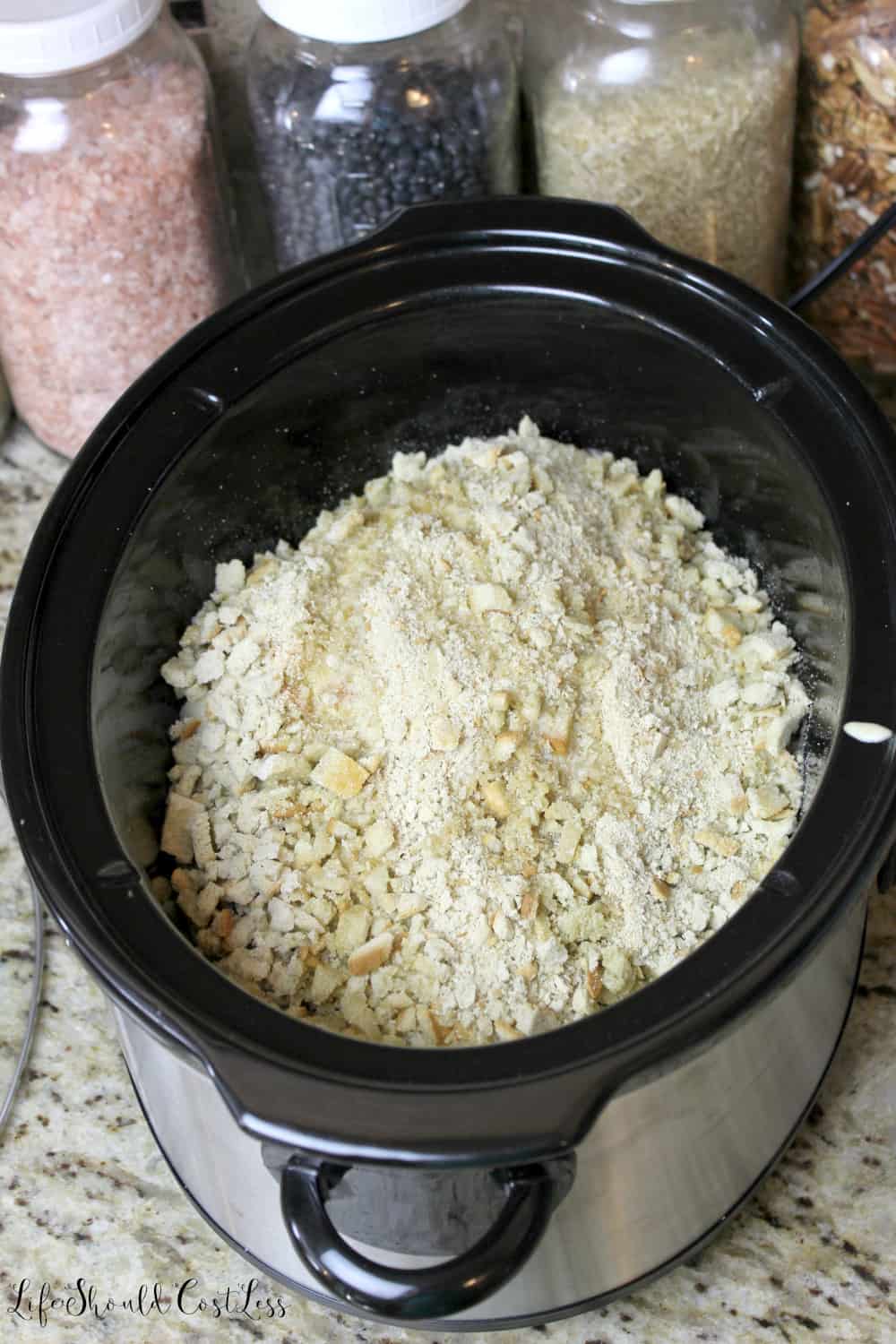 Put the lid on and set on high for four to five hours…obviously, low is an option, but I never get it in there fast enough to do low… one of these days I will be that on the ball again. 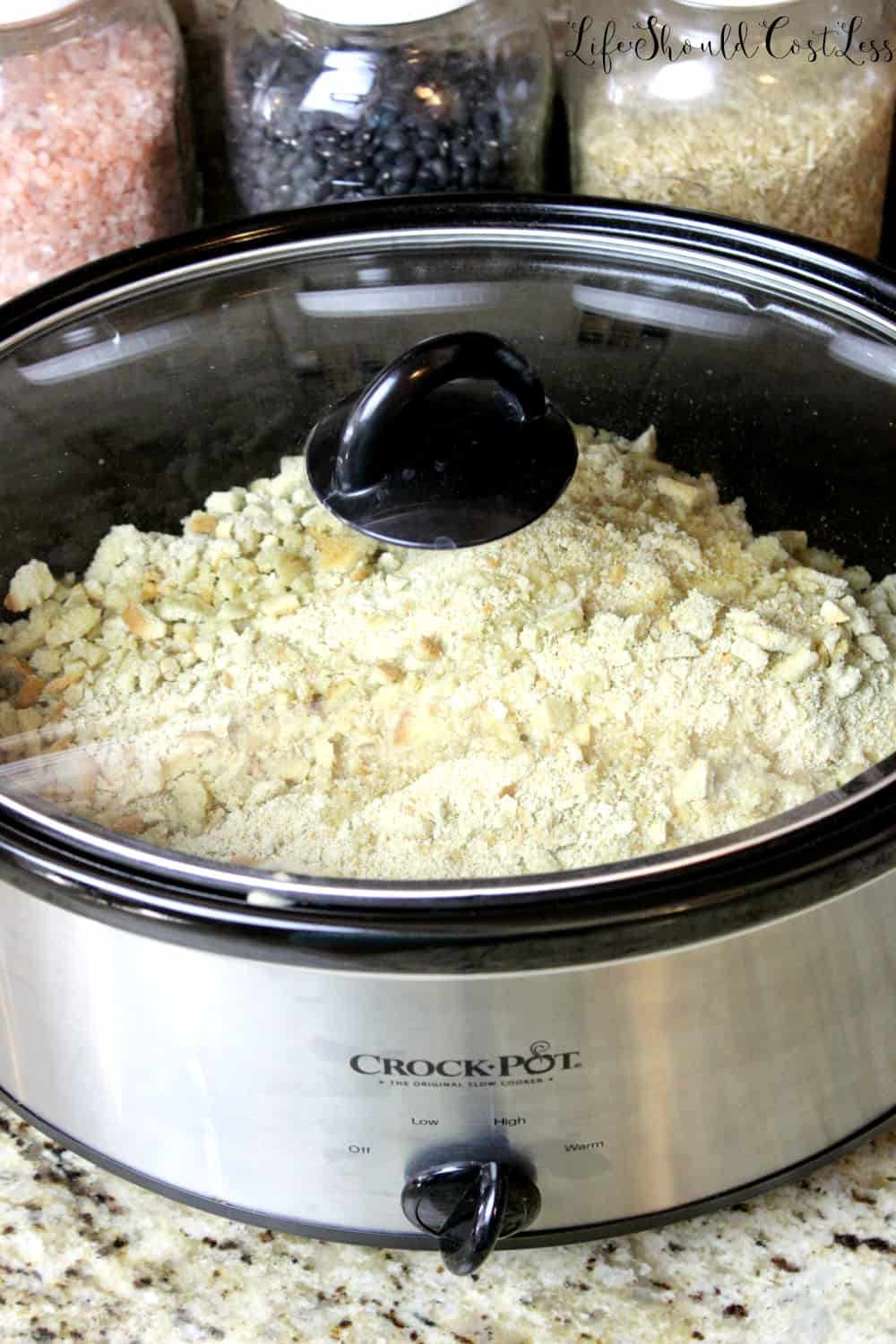 Here’s what it looks like at the end when I say to crack the lid. 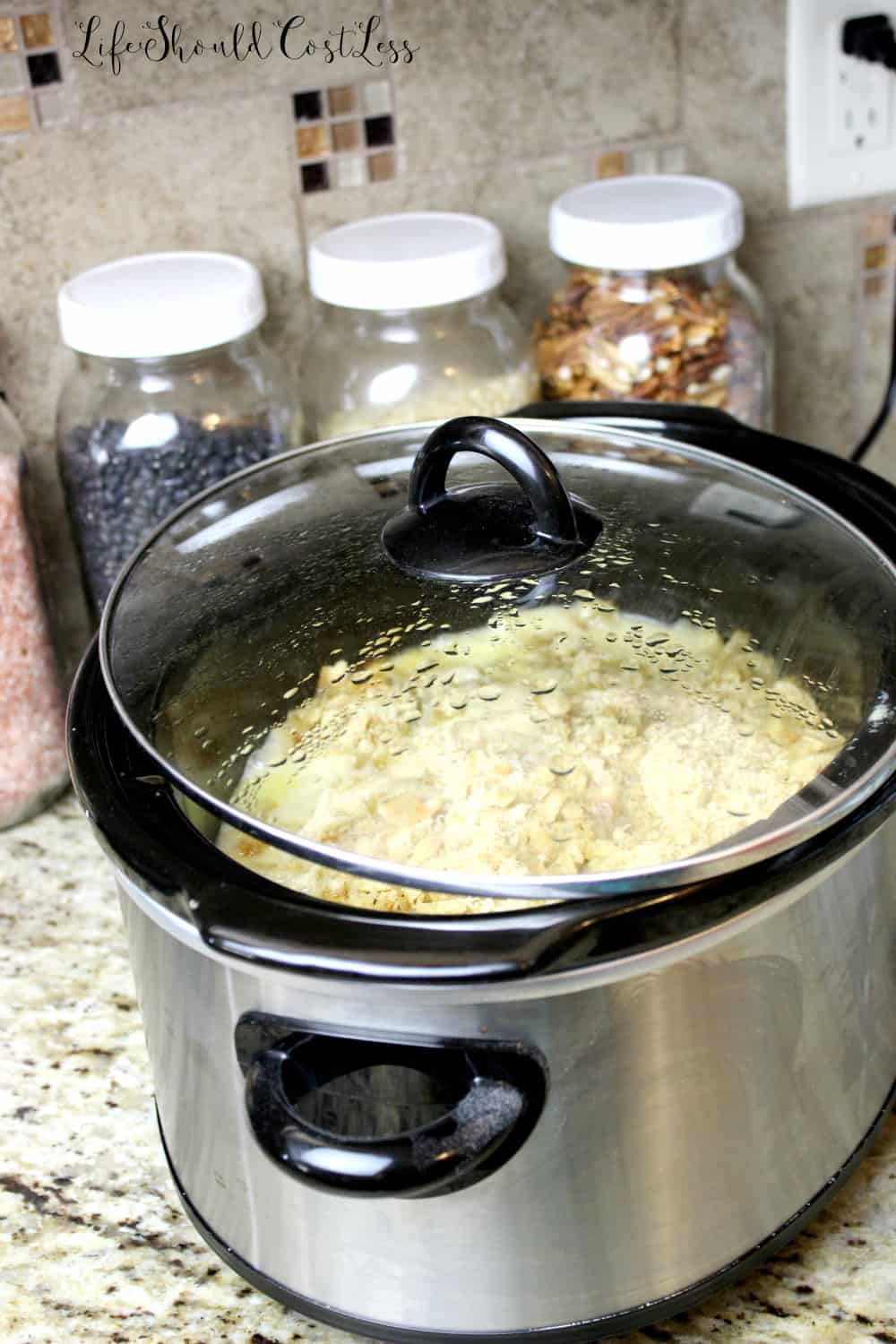 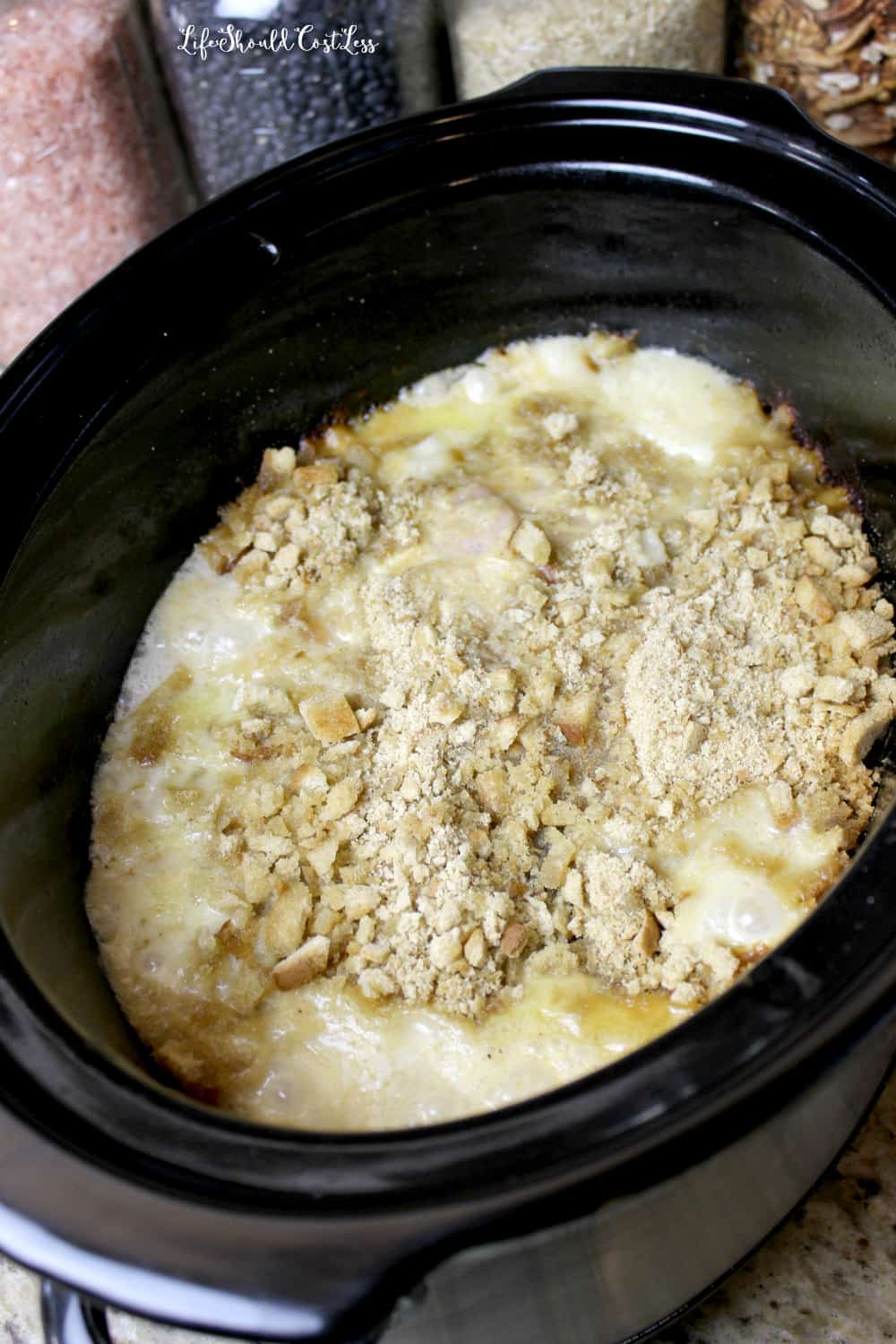 And dishing out the deliciousness! 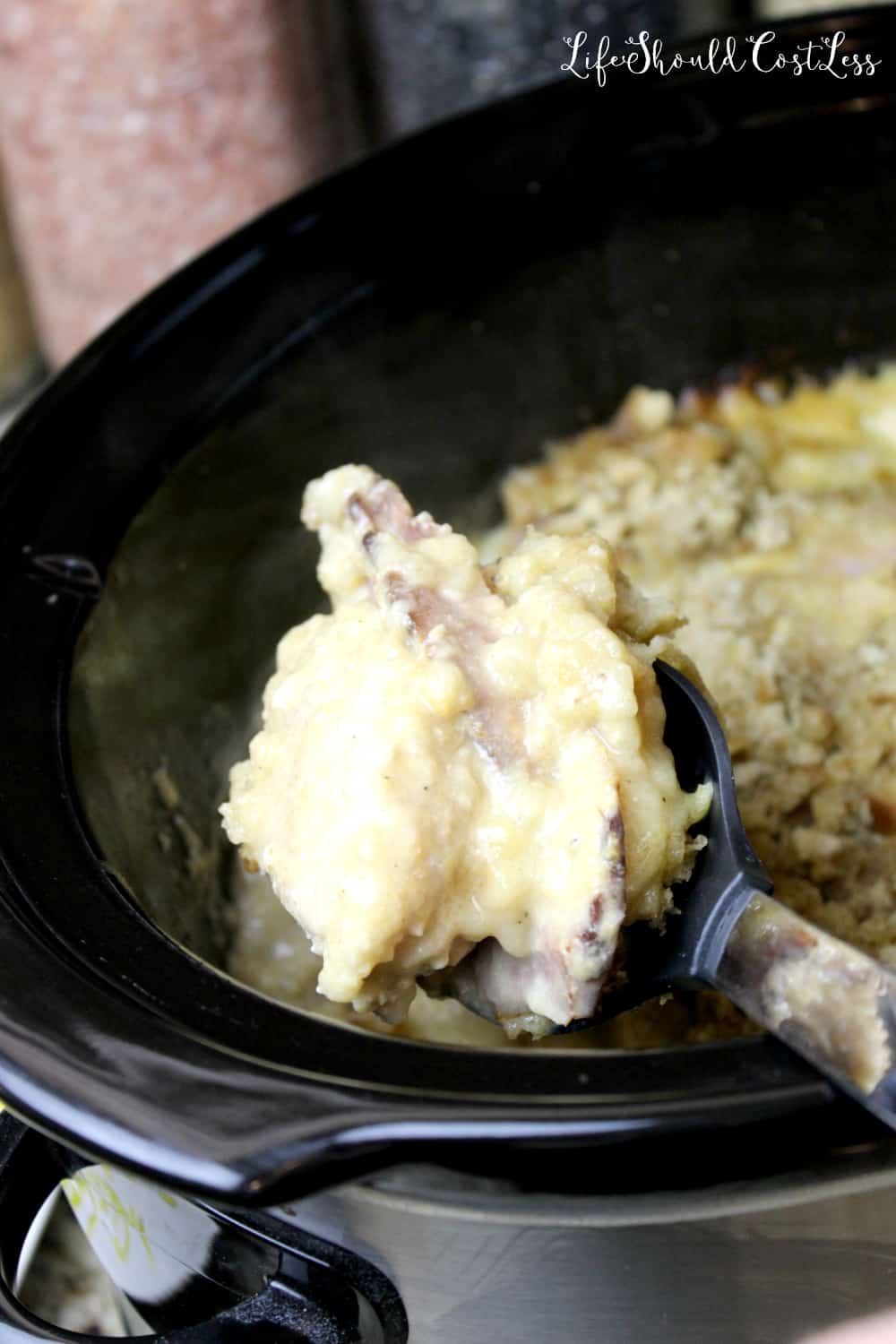 And now it’s ready to eat! I promise this recipe is going to become one of your winter favorites, it’s so dang yummy! Fattening, yes, but yummy enough to make it worth it. 😉 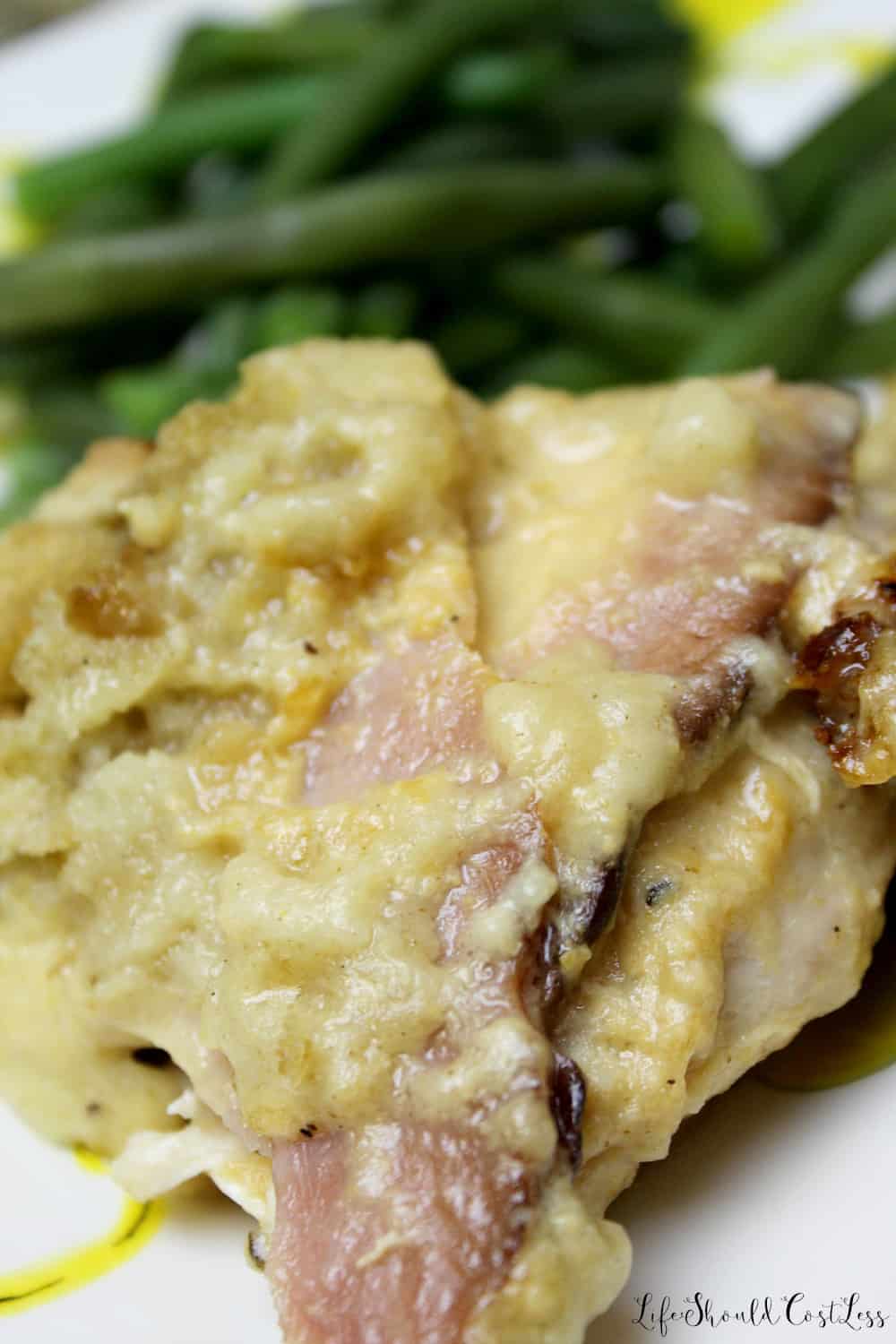 Save Print
Prep time
20 mins
Cook time
4 hours
Total time
4 hours 20 mins
Author: LifeShouldCostLess.com
Serves: 12 Servings
Ingredients
Instructions
3.5.3208
So, give this one a try, you won’t be sad that you did… My only complaint about this recipe is that it fills me up so much that I’m not hungry for hours…and this girl likes to eat so that is a problem ;0)!

P.S. Make sure to check out my entire slow cooker and twenty minute meals sections.