Skip to Content
Here is the final of my Jolly Rancher Posts, sorry to overload you with them this week. I’ve got to finish them up because otherwise this sugar binge of making so much candy is going to become a habit, and we can’t have that. Actually, I think I’m done making candy until Christmas rolls around. 😉 Don’t be shocked that there are lots of pictures on this post, some things you just can’t explain without pictures…plus my camera was actually working, so I tried to take as many as I could while it kept that up. I’m hoping to get a new camera for my anniversary in October, so fingers crossed!
Jolly Rancher Flavored Taffy. It tastes like chewy Jolly Ranchers and doing it yourself is nice because you can alter it to be chewier or customize it any way you want. Doing it in the Bosch makes it easy too, sometimes you just want the end result without it being a messy huge production in the kitchen. Here it goes.
Place the following ingredients in a large pot:
2 & ¼ Cups Pure Cane Sugar
2 T Cornstarch
1 Cup Light Corn Syrup
1& ½ C Water
2 T Salted Butter
½ tsp Salt
Turn the stove to medium heat. Gradually stir until it comes to a boil. Let it sit and boil until it reaches the the firm ball stage or about 250°F. (this usually takes about 18 minutes of boiling on my stove-top) 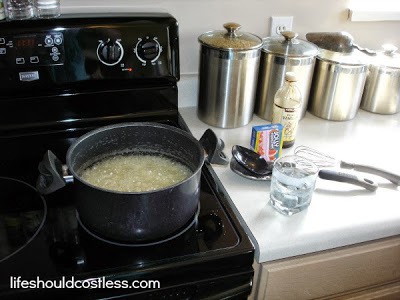 Remove from heat and whisk in:
One Package of your flavor of choice Jolly Rancher Gelatin. (I used Watermelon this time.) 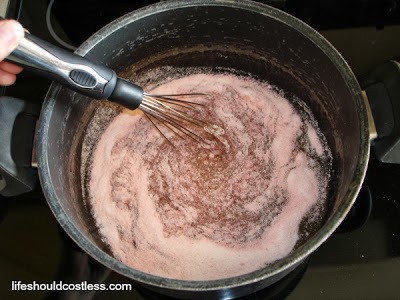 Return to heat and bring it back to a boil for 3 Minutes.
(This part is crucial or your candy will be grainy. The sugar in the gelatin mix needs to dissolve.) 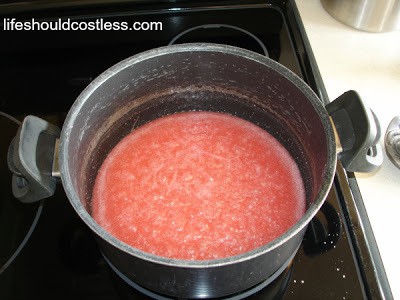 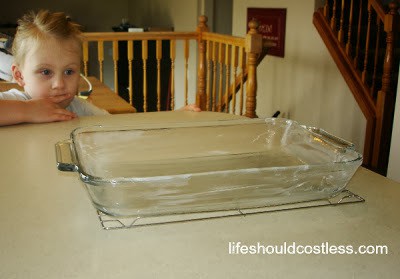 Then, pour it into a buttered dish. I like to put the dish on top of a cooling rack so that it cools faster. 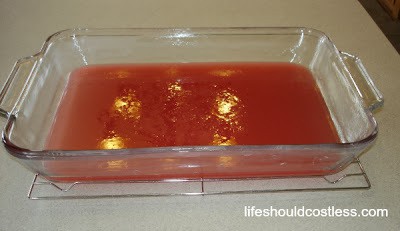 Let it cool until it is only a bit warm. This can be anywhere from 8 to 15 minutes. 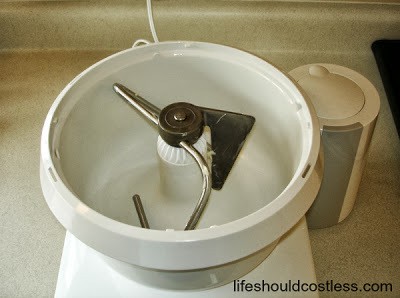 While it is cooling, butter the Bosch Bowl, and Dough Hook (make sure to get butter everywhere that the candy is going to touch). 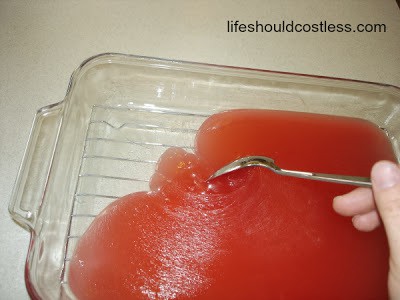 When you can pull it away from the dish like this, it is ready to put in the Bosch. 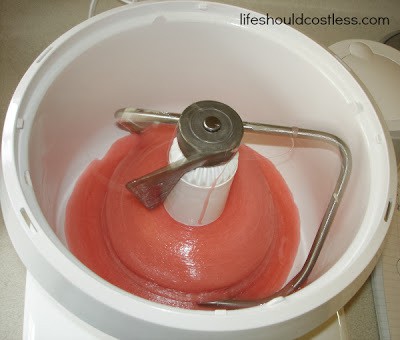 Pour the candy into the buttered mixing bowl. Be careful not to get it on the top of the Dough Hook…I got a little on there, but I was trying to take a pic of the process and it wasn’t working too well. I just needed a third arm is all. Set the mixer on low and let it do its thing for about 5 minutes. If candy gets stuck on that center tower thing just turn it off and use a spatula to remove it. Then resume the process. 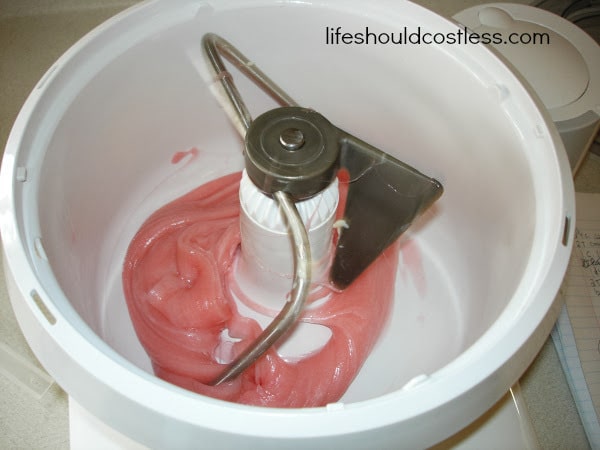 Once the time is up, remove the bowl from the mixer stand and stick it in the fridge for about ten minutes. 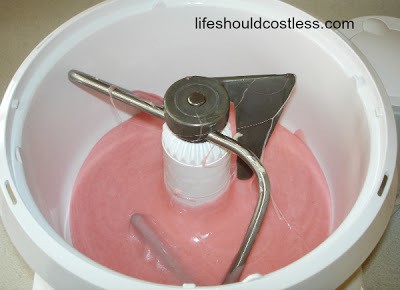 Once the ten minute fridge time is up, return the bowl to the mixer stand and turn it back on low for a few minutes.  This is where you can have it go longer for a lighter/fluffier candy, or you can go less time if you prefer it a little more hard. (It may take a couple of batches of this to decide exactly how you prefer it.) 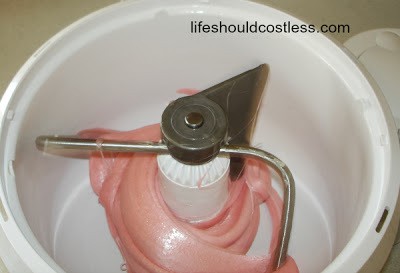 **Make sure to wash and butter your hands before you do this part.**
When it reaches your desired consistency it’s easy to split it into two sections and then kind of pat them out a bit so that you can cut them. I used a parchment paper lined cookie sheet, but this makes so many pieces once it’s cut that you may want to have a second sheet ready to go.
I like to keep the scissors I’m going to use sitting out on a plate with butter so that I can butter the blades any time it needs it.
(If you’re like me and your kitchen scissors broke long ago, I opted to wash a pair in the dishwasher so that they are dis-infected and safe to use for making candy) 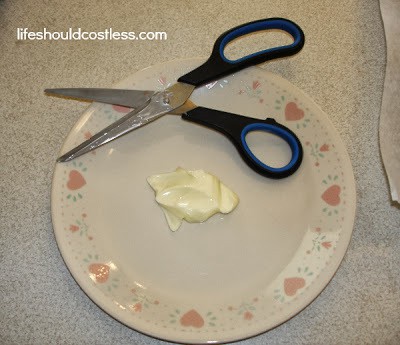 Snip into pieces of your desired size and you can either leave them on the cookie sheet to harden a bit more for the next hour or so and then put them in an air-tight container, or you can wrap them in little squares of waxed paper. 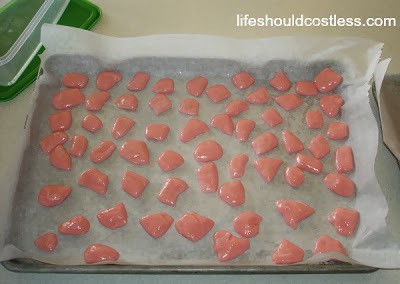 That’s it, you’re done… Shown below is a batch of some Green Apple ones that I did, but the flavor isn’t quite as strong as I’d like, maybe I’ll try adding two boxes of Gelatin mix for the next Green Apple batch. 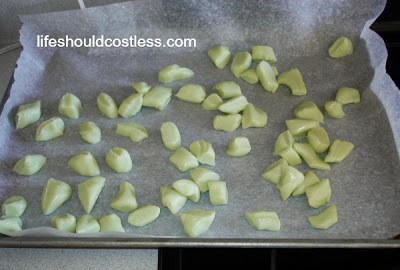 Troubleshooting a botched batch:
Make sure you use Pure Cane Sugar when making candy, the cheapo stuff can turn it soupy.
Room temperature and humidity affect your results so be mindful of that. I like to make it when the house is about 75° F and I’m in Utah so humidity is rarely an issue.
Make sure you use enough corn starch, if you’ve already tried the other two things and it’s still fairly soupy try adding another Tablespoon of Cornstarch next time.
If it turns out grainy, once it is completely set, you probably didn’t allow the gelatin mix enough time for the sugar to dissolve.
If you’d like to try the other two Jolly Rancher Recipes I have (both are easier than taffy), here are the links:
Jolly Rancher Popcorn Balls
&
Home-Made Jolly Rancher Hard Candy
Where can you buy Jolly Rancher Gelatin? Winco carries it in Green Apple and Watermelon

(for really cheap, like 52¢/box). Amazon Carries it in Watermelon

. Please comment if you’ve seen it for sale anywhere else.
*The recipe was based off of this one.

*Please note that this post was originally shared to this site on August 20, 2013 and it has since been updated.