When I was little, I shared a room with my sister until I was about seven years old. While sharing a room, we got along ok, about as good as any siblings could. However, when we moved into our new big (4,000 sq ft) house, where we each had our own bedroom, We no longer got along and continued to not get along until my sister got married and moved out (8 years later). Maybe it’s a bit of a stretch to some of you, but I attribute us not getting along anymore to us no longer having to share a room.

My reasoning is that I think it has something to do with the fact that if we had a fight with each other we could just run off and go “hide” in our own room and we didn’t have to deal with the other person or work out our problems. However, if we were sharing a room we would have had to learn to work it out or else life would have been even more miserable. Distance is not your friend when it comes to relationships…ANY type of relationship. I think that forcing my kids to learn to share a space and learn to get along will help them in all aspects of their lives. As an example, in marriage, if you come across a problem and are accustomed to running away to your own space when trouble arises, it is just going to make the situation worse. But, if you have been in the habit of having to work out your problems instead of running away from them, you’ll have a much easier time getting along. The transition from working it out with a sibling, to working it out with a spouse won’t be too far of a jump. I can also see the “having to share a room/learning to work it out” thing help them learn to stick out a hard job in the future because it will better equip them to deal with a difficult boss or co-workers. 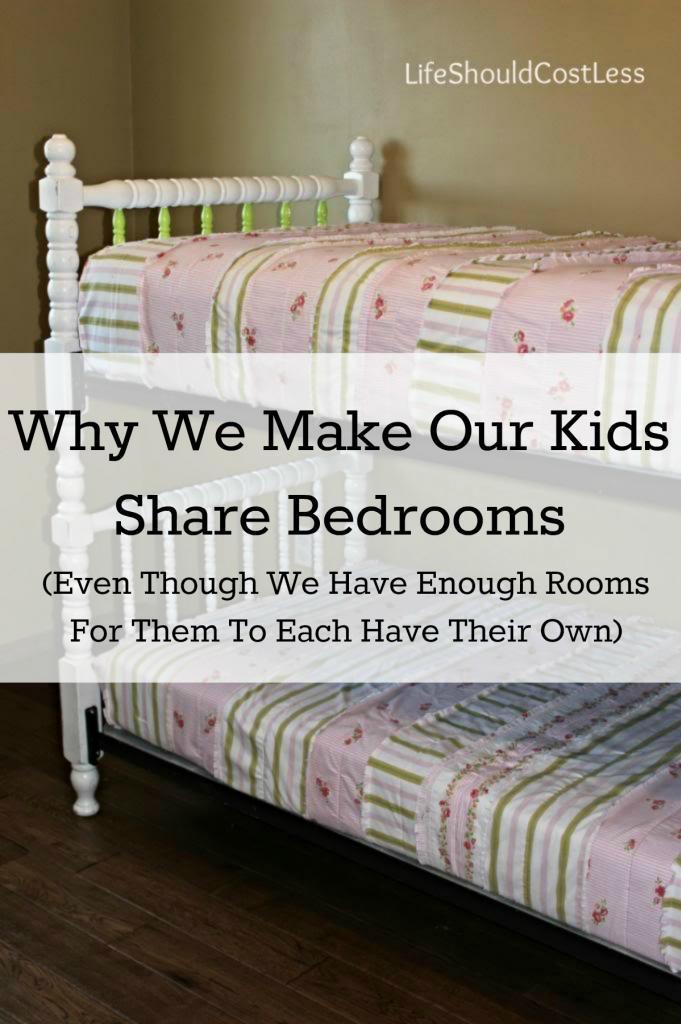 When I think back on some of the things I did or didn’t do as a result of being spoiled by having my own room, in some ways it really held me back.  For instance, when I was in High School and was considering my options for after graduation the thought of sharing a dorm room or even a studio apartment with someone was completely out of the question. That attitude took a couple of my options for the future right off the table. Also, I really think that had I been accustomed to sharing a room, or living with somebody else in general, I wouldn’t have had such a hard transition when I got married. Learning to live with anyone, when you haven’t had to for the bulk of your life, means that it was a HUGE transition for me when I got married. Not a pleasant one either. My husband was a major slob those first few years, so I REALLY REALLY struggled. It literally took me several years to adjust to him. (Love you honey 😉 )

We want our girls to develop strong relationships with each other so the plan is that every 6 months to a year or so to have them switch which sister they are sharing a room with.This will also help them with adjusting to change. I think my favorite part to the girls sharing rooms is peeking at them at night. I’d say that 95% of the time the older two sleep in the same bed just because like love to cuddle each other. It melts my heart.

The financial aspect to the decision (because for some people, it’s all about the money):

When we bought our newer home a little over a year ago, we ended up buying one that was just under 2k sq ft. That is 800-1300 square feet smaller than what we were initially looking at. I also had recently fallen in love with the quote:

and I took it a little bit on the literal side. It all came down to how much that extra square footage would cost us over time and so far, it was well worth the decision. Buying a home with less square footage, because you have your kids sharing rooms, will save you a small fortune over time. Lets say that you buy a house that is $35,000.00 more just because you want each child to have their own room. This is the exact amount higher our house would be if we had gone with a particular house we loved with a larger square footage! At today’s current mortgage rates, that $35,000.00 is actually going to add an extra $177/month to your mortgage payment. More, if your credit is less than stellar and you don’t get the best mortgage rate. Over the course of a 30 year loan, this ends up being $63,720.00. That extra square footage is also going to cost you an additional X amount of dollars to heat, cool, power, furnish, and maintain/upgrade those extra rooms (not to mention that taxes and mortgage insurance would be higher too). A set of bunk beds is so much cheaper than all that money going down the drain for no good reason. Just think about it, it all adds up! I personally would rather spend that $63k on buying a mountain property somewhere someday, or being able to afford all these weddings we’re going to be having to pay for…but that’s just me.

Obviously some people don’t have kids the same gender and have to have their kids have their own room… I’m just giving my reasons. Especially since when the newest addition to our family gets here this winter we will have FOUR GIRLS!!! YIKES!!! ( PS: If you haven’t seen our gender reveal yet, you need to, it was hilarious and can be found here.)

I hope this all made sense and I was able to convey what I meant to. My pregnancy brain has been especially bad this time around and my husband likes to say things like “Do you know how I know you’re pregnant? You just went to go get something and you came back without it”…and I’ll do it several times in a row…Sheesh!  Anyway, I’m leaving you with some things to think about and they may also tie into my previous post called Some Things To Consider When Purchasing A New Home… remember that every financial decision you make now affects your financial future too!

*In the title I mention that we have enough room for our kids to have their own rooms.. Well yes, we do, but there wouldn’t be room for anything else. Right now we have 3 in one room, my office, my husband has a man cave, and a play/toy room.  When the new baby gets here we’ll be splitting them up into pairs in two separate rooms. I’m going to lose my office, but we hope to build me one in the back yard some day. I love having a play room to maintain the toy mess, that is worth them sharing rooms just for that much less headache from not having toys in their room. Plus that toy room will be converted to a storage room when they are all a bit older and no longer need it.