Posted on Last updated: Categories For the Kiddo's/Parenting, Miscellaneous, Uncategorized

My post for today has nothing to do with saving money or making life easier, but it is something that I thought would be really neat to show you all. Back in October 2005 when my husband and I were just kids (yep, I was 19 and he was 22) we got married. We’ve never been super traditional in our gift-giving and for his wedding gift, I gave him a pair of these Vans Checkerboard Sliders

that he really wanted. 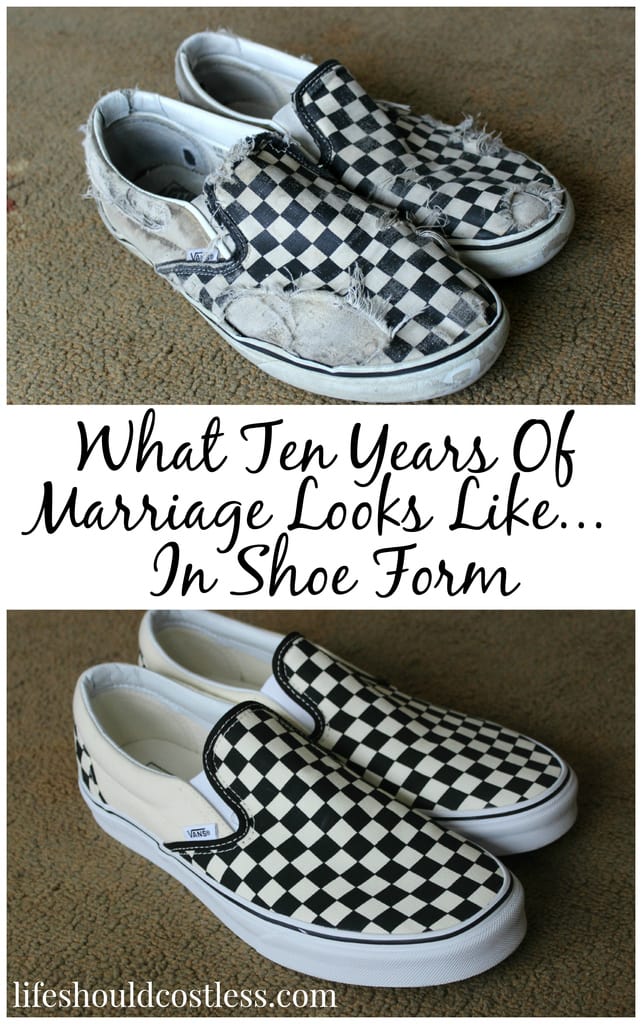 He wore the tar out of those things in this last decade (I guess it was a gift well given) and I’ve been pretty embarrassed that he has still been wearing them. In fact, I fondly refer to them as his “Hobo Shoes”…

Looking at them now, it is kind of symbolic of our relationship because we have been through some really tough stuff. I’m not going to go into too much detail, because some things are just meant to stay between husband and wife, but it has been nowhere near smooth sailing… in fact, neither of us even enjoyed being married until we had been married for about seven and a half years. We had to grow up a bit and become really good at forgiving each other. I guess it just took us a long time to find our groove… 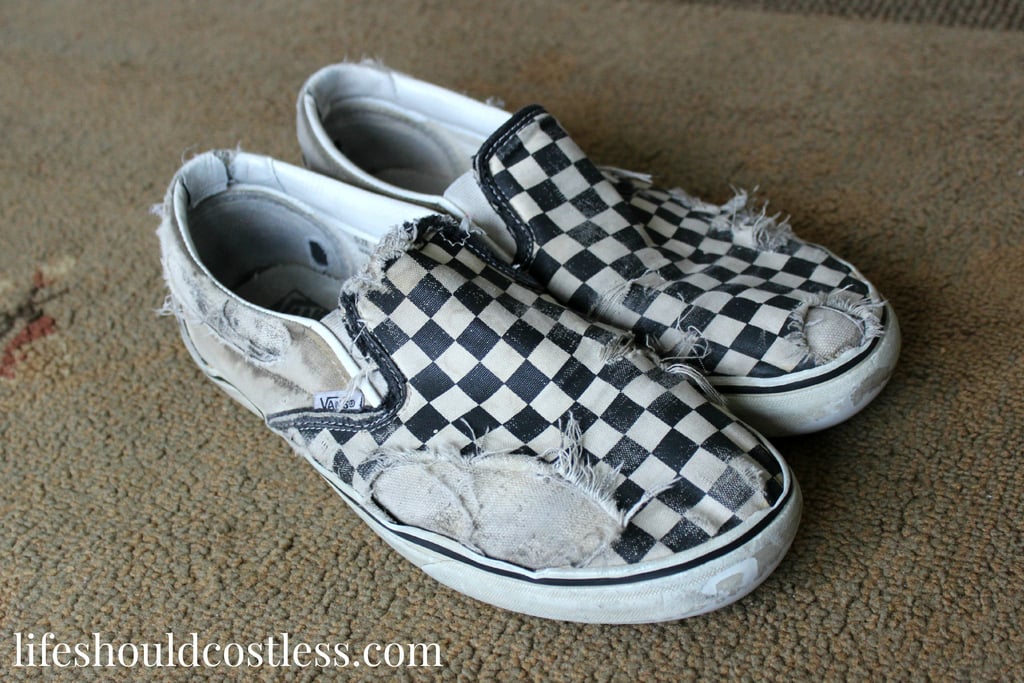 I thought it would be a great gift to replace his “hobo shoes” for our ten year Anniversary (yeah, Hawaii didn’t happen like we’d wanted to go this year, getting laid off the month before will do that, but oh, well…maybe by our 15 year we’ll finally get to go on a honeymoon). Anyway, I got him a new pair of shoes and threw the old ones in the trash…only to find that he had dug the old ones out and still wanted to wear them because “they’re so comfortable”. I guess it’s not just our kids that I have to worry about digging stuff out of the trash. 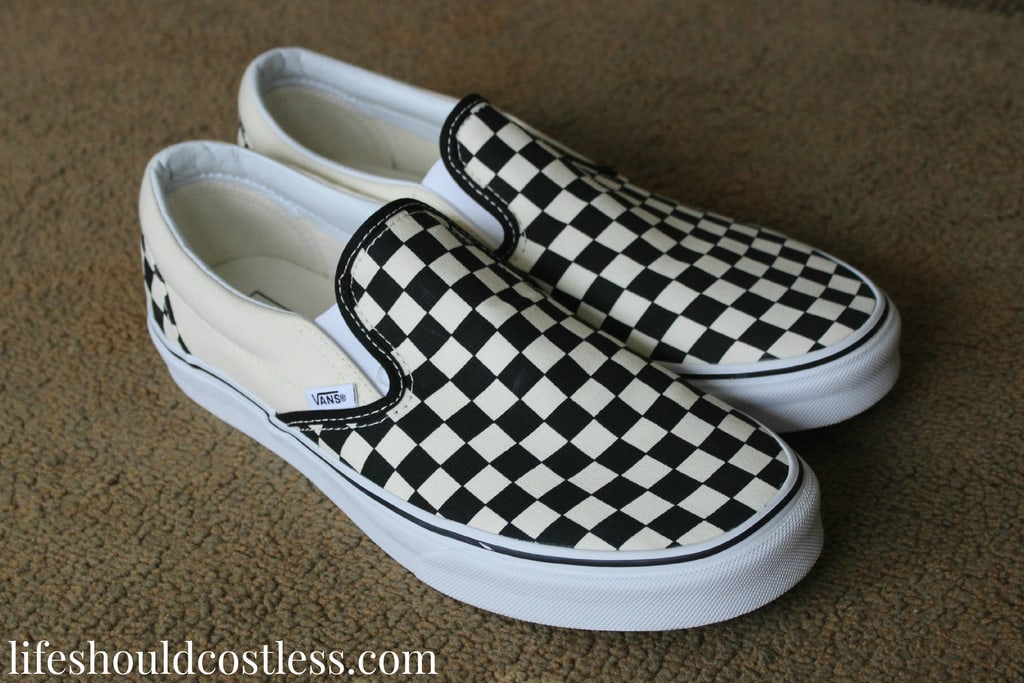 The new pair I got him for our Anniversary is also symbolic of our relationship in that I love him more now than I ever did before we got married. It’s hard to describe how lots of hardship and learning to fall in love with someone again and again reshapes both your heart and your definition of what love actually is.

My advice for a better marriage:

That’s all I have to say about marriage…for now. Stuff learned the hard way gives the best advice. Even if it seems harsh. ~Sarah 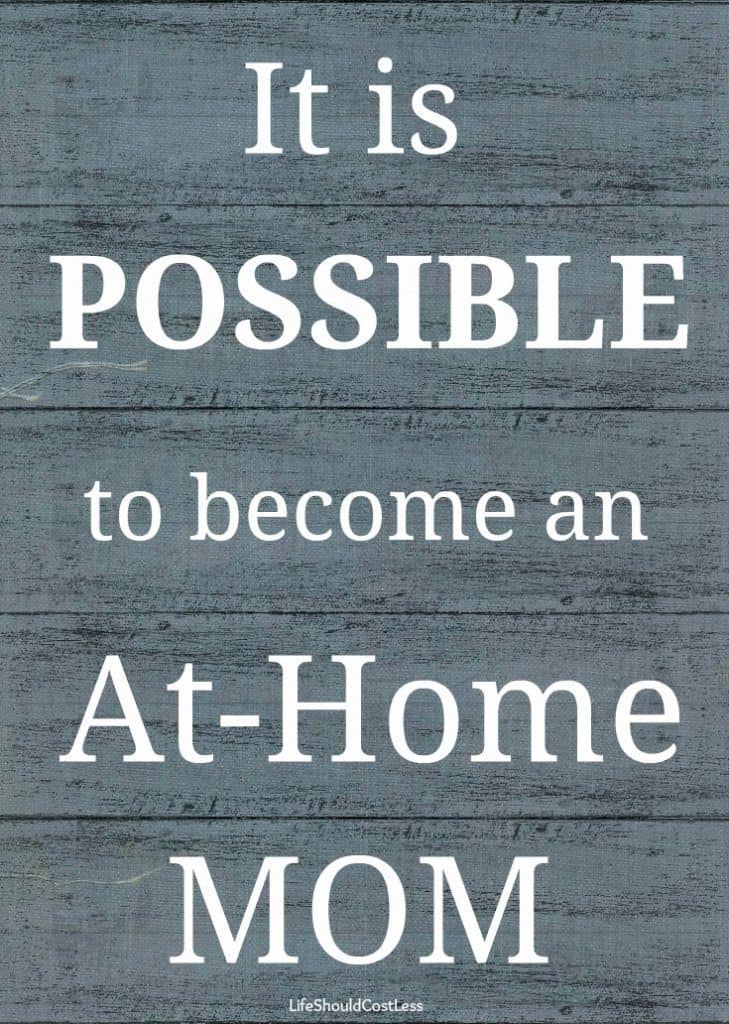 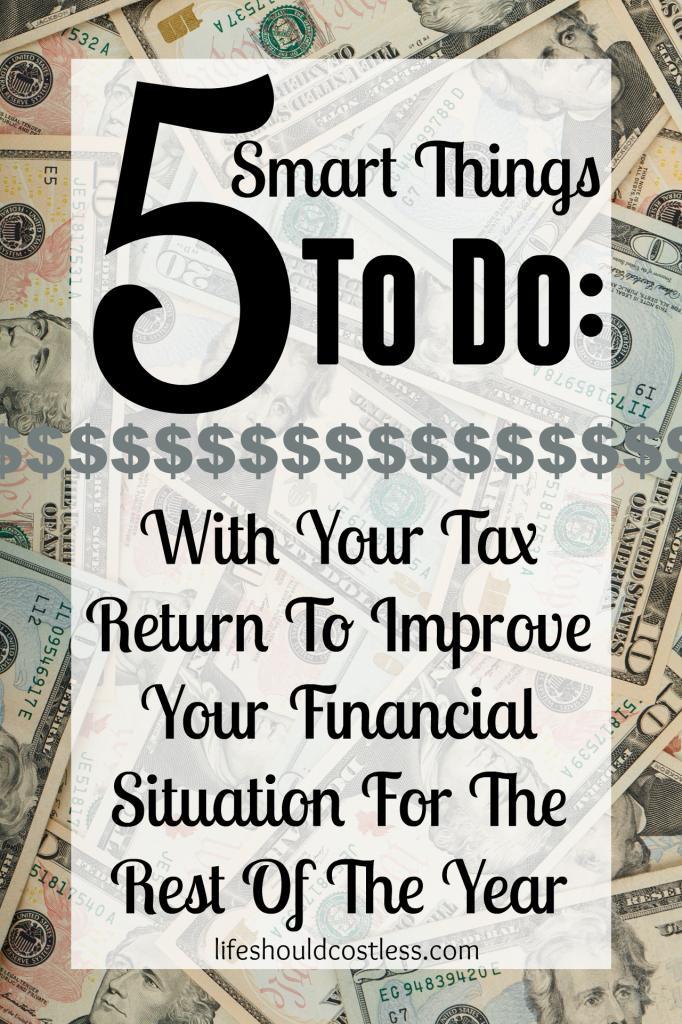 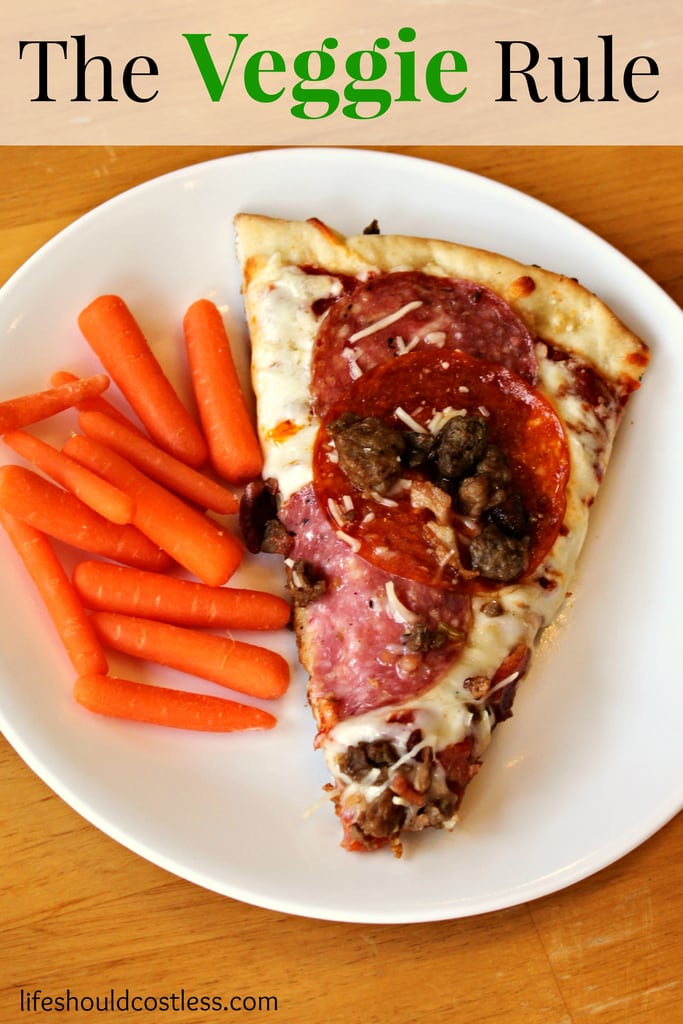 Check out my other site: 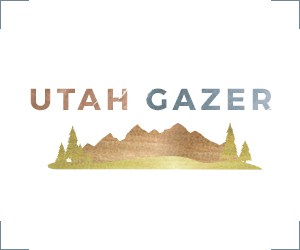 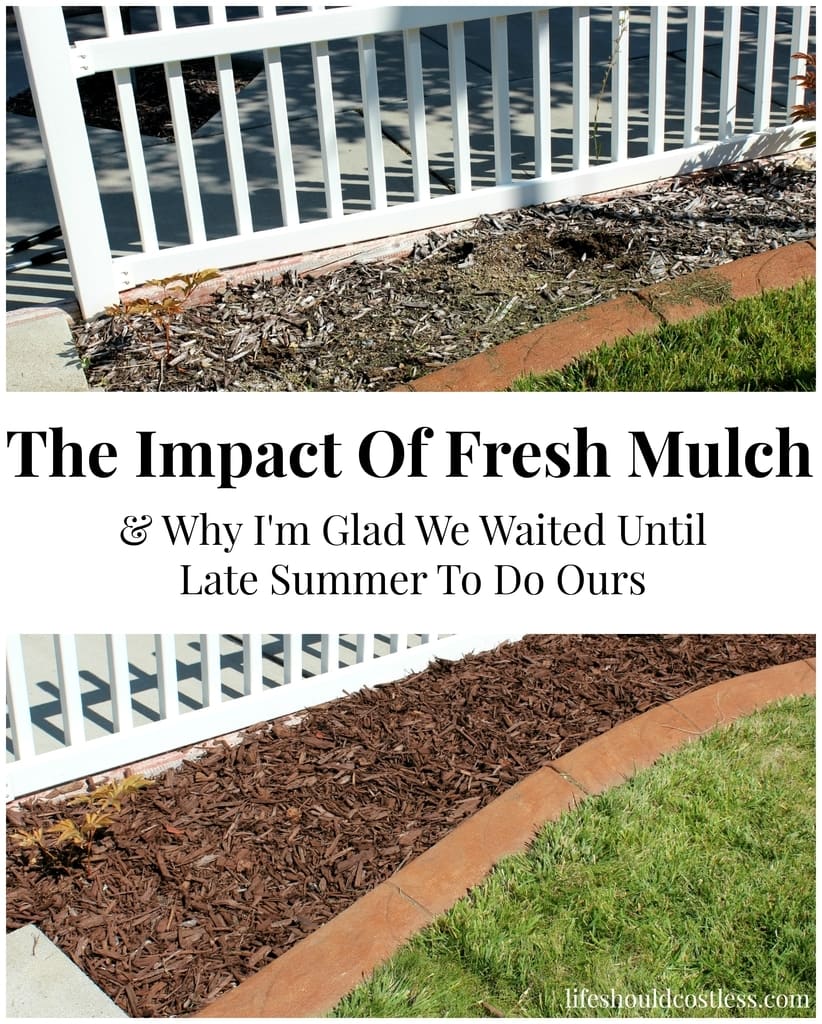 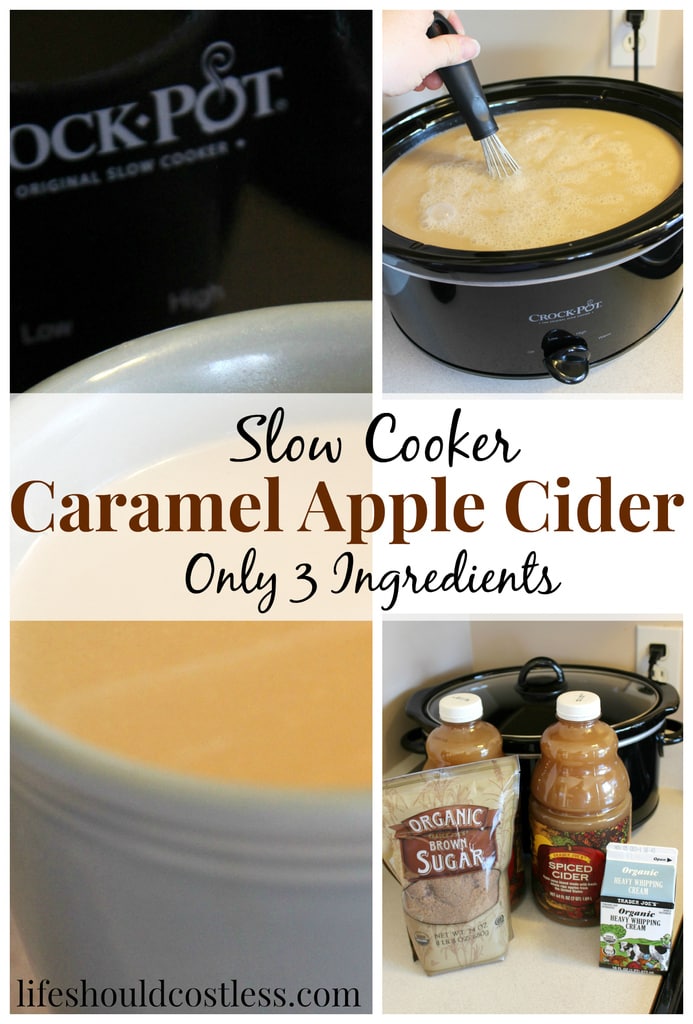