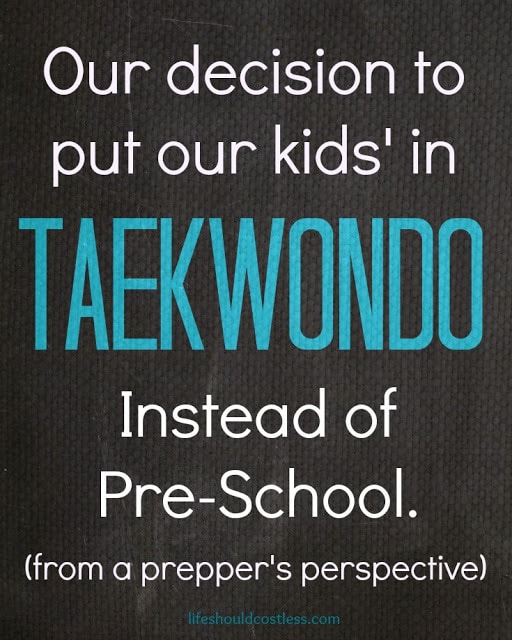 I’ve been a nervous mom since the second that I found out I was pregnant (actually long before that when I worried about bringing children into a world with so much evil in it)… What can I say though, I’m at least a third generation worry wart! I’m always mulling some worry or another (or 20) over in the back of my mind. This would drive me insane, but I try to harness those demons by doing what I can to work on our food storage and whatever emergency preparedness I can fit into the budget. It doesn’t entirely hush those worries, but it does keep them at bay…for the most part anyway.

Our oldest daughter is going to be in Kindergarten this next school year and that step brings with it
a whole new set of worries.
So many things could go wrong, and we wouldn’t be there to protect her. Many people just home-school because of those worries, but my husband and I both agree that it is important to have the social aspect that comes with going to a public school (whether it be charter, private, or standard public). I personally think that having to work hard to get along with others and learn to deal with social situations is VERY important and is often overlooked when people decide to home-school. But, that is a personal decision and to each his own…it’s just not what is going to work for THIS family.

The decision to go the public school route is made, now what did we do about those new worries. We put her in TAEKWONDO! Yes, martial arts was the answer for us. If something were to happen at school and we aren’t there to do our best to help her, we need to be able to literally give her a fighting chance if something big were to happen. Plus, bullies will be way less likely to mess with the Peterson girls if they know they are all trained in martial arts. Not that we encourage fighting, but if someone punches our kid (especially for no reason), that kid has our permission to defend them self.

So, why Taekwondo instead of the other martial arts options? Well, we LOVE what Taekwondo teaches. Here are some things from the Taekwondo Philosophy.

Who doesn’t want their children to develop those qualities? Plus, There is a home rule checklist that they have to be doing well on if they want to test for their next color belt. It has things like: show respect to your parents, do your homework, do well in school, keep your room clean, help with house chores, do what I’m told the first time asked, maintain a good relationship with your siblings…ALL GOOD THINGS! I’m not trying to push Taekwondo on anyone over another martial art, it’s the just route we decided to take and have been happy with it these last few months since we have had our daughter involved in it.

Why Taekwondo instead of Pre-School? Frankly, they cost is about the same, but if we were paying for both we just couldn’t make it work right now… and given our view on which is more important, it’s a no-brainer on which one we would budget in. Plus, I am an at-home mom and I teach the girls the things that they need to know to be prepared for school (minus the social aspect which they get between church and Taekwondo). We also do abcmouse.com and it is a GREAT, inexpensive, learning tool!

Just some things to think about.(oh and Taekwondo is also great exercise;) ~Sarah

Make sure to check out my other preparedness posts and the food storage ones too!