I have never been a fan of snakes. That is the understatement of the century by the way…Some people seem to think that snakes make great pets, but not me, I try to keep them as far away from me as possible.

I even hate looking at them through the glass any time I take my kids to an aquarium. Snakes have always been on the top three of my biggest fears list, alongside sharks and spiders of course. So, one day, when I opened my car door and saw a slithering movement out of the corner of my eye, you can only imagine…

One of my biggest fears was uncoiling right before my eyes.

If you’re like me, you have always pretty much thought that your worst fears are irrational ones and that nothing will ever come of them.

Isn’t that a nice thought?

Well, as my experience shows, sometimes fears aren’t really that irrational because they can come true, and it might just transform your life like it did for me.

So, here’s the full story of finding the snake in my car:

One day I was running errands with my dad and my younger two kids. Just going about our merry way, not a care in the world…

I had just unloaded my shopping cart and buckled in my kids and opened my door ready to get in. As I was lifting my foot into the car I caught sight of a coiling movement out of the corner of my eye.

Naturally, being as scared as I was of snakes, I screamed and slammed the door without a second thought.

Unfortunately for the snake, it had tried to get out of the car just as I slammed the door and it became smashed in it.

Yes, I was a total spas and was running around my  car yelling

“there’s a freaking snake in my car”…

Which the truck full of day laborers parked next to us thought was quite amusing. They even hung around long enough to see it all play out. I’m so glad they didn’t film it…that would have had an immeasurable number of views on Youtube…

All of you animal lovers out there need not get your panties in a twist. I wasn’t trying to hurt the poor thing, slamming it in the door was an accident.

However, it being stuck there did give my dad and I the chance to determine that it was not a rattle snake…it whipped its tail around a few times which made the whole ordeal much less scary. Obviously we are not snake experts ;).

We thought that it was pinched so tight in the door that it was going to die so we waited a few minutes thinking it was a goner…but it never stopped moving. So, I opened the door trying to let it get out and rather than it coming down it slithered back in to where it had been before.

Luckily, that was the wheel well and not actually inside the cab. But it wouldn’t leave its cozy little spot and we were in a hurry so we got in the car and drove home.

Of course I was looking down frequently praying that that thing wasn’t going to make its way into the cab, and of course my dad thought he was funny and kept teasing me with snake noises the whole way home.

Once home we all got out of the car and I was determined to sit around and wait for it to get out of my car before I would go in the house. I just had to know that it wasn’t going to give me another heart attack later on. A few minutes later it dropped down onto the driveway on its way to find a better place to rest.

See, it was fine. If you look closely you can see where it got a kink in it from being trapped in the door. I gave it the nickname of “Kinky”  (yeah, I’m a dork that has a “that’s what she said” kind of sense of humor) and was beyond happy when it slithered on its way.

It wasn’t venomous, so there was no need to kill it.

That night I found myself reliving the sight of the coiling over and over in my mind and I was totally freaking myself out. Like borderline having a full blown panic attack.

I decided that if I didn’t get a grip on the fear that night, right then and there, that it was forever going to haunt me. So, I did something crazy! I told myself that I was not going to think about it anymore and I forced myself to think about something else that was positive.

I hadn’t done that in years, but it reminded me of the times when I was little that I would be lying in my bed afraid and I would force myself to think about the Carebears so that I would have good dreams… pretty good that the little girl version of me had it figured out and I just had to dig down deep and bring that little girl back.

She knew how to not be scared, and that blast from my past gave me the strength that I needed to overcome that fear. I definitely didn’t think about the Carebears, in fact I can’t even remember what got my mind off of it, but forcing myself to think about something else totally worked.

Since then I have started looking at fear differently. Yeah, at first facing your fear is scary as hell. Pardon the curse, but it was necessary to get the point across.

But soon after, once the nerves have settled you find that you are still alive and it wasn’t as bad as you thought it was going to be.

Facing your fear is just like ripping off a Band-aid. It stings and hurts for a small amount of time, but after it’s over you move on and it just becomes a memory that gets more distant every day.

Making this shift in my brain has kind of turned me into a force to be reckoned with…I’m not really that afraid of much anymore. Including sharks, spiders, and snakes… yeah, I’m sure I’ll encounter at least a few more spiders and snakes in my days ahead. But at least now I will be a bit more calm about it and just deal with it while it is happening and not dwell on it after the fact.

Having this new attitude about fear reminds me of my main motto these days. Which is, “prepare for the worst, hope for the best” it’s how I look at everything and do all of my decision making. So now, I prepared for the worst, I totally bought myself a snake bite kit the day after the incident (you can add one to your Amazon Shopping cart here) I’m not even joking. I keep the snake bite kit in my car too…lol.  See, so now I’m prepared and I can go about my days not worrying so much about it.

Guess what? If I can change my attitude about fear, YOU CAN TOO!

Whenever you are faced with something scary and are trying to get over the nerves afterwards, just picture a little curly red haired girl telling you to think about something that makes you happy, then focus on it with all of your might… and odds are, YOU WILL BE OK.

So that is why I am kinda thankful that I found a snake in my car…it was a life-changer and now I know that I can face anything that comes my way.

Thanks so much for stopping by my blog! If you liked what you saw, please make sure to share it via social media!

If something was particularly helpful and you would like to donate directly to the blog, you can do so via PayPal, here. I’m a single mom of four, so every little bit helps. Thanks so much! ~Sarah

Here are links to five of my other posts that you may also like…they’re not motivational, but you may find them pretty handy (the pics are links):

*Reposts: Please note that this idea/post was originally posted to this website on 03/18/2017 but it was in great need of a refresh so it now is more user friendly/shareable. 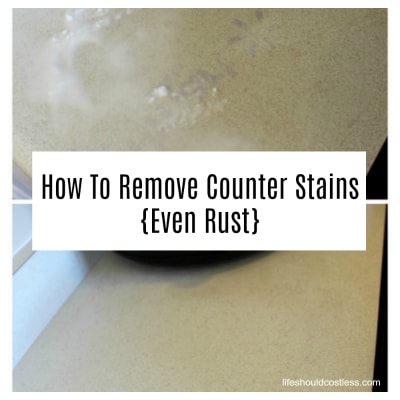 Next
How To Remove Counter Stains, Even Rust
Comments are closed.