When I was a little girl, one of my favorite Christmas-time traditions was getting together with my cousins and making Gingerbread houses. Well, when I saw the idea of making candy Nativities, I knew that it was the tradition that I wanted to start with my kids and nieces and nephews… luckily my husbands family were great sports and all drove an hour to come over and make it happen. Though I did bait them with free candy… 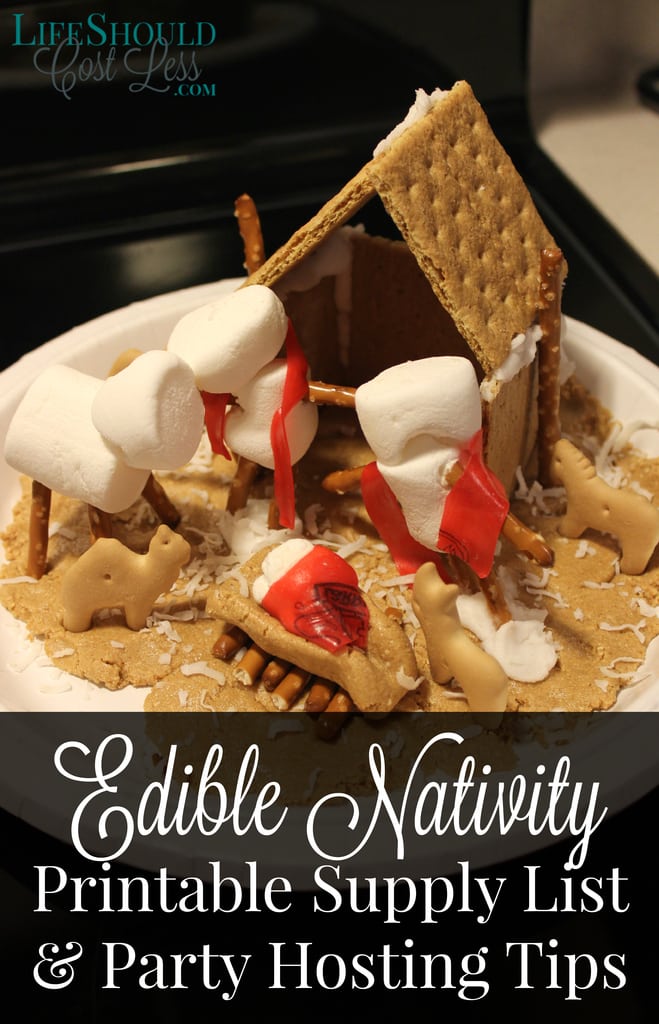 I started out by brainstorming and searching the internet for ideas on how I wanted to do ours. I got some good inspiration from a few different places listed here:

To prep the table, I taped down some brown paper. My table is super crappy so yes, I taped it directly to the top, sides and underneath of it. 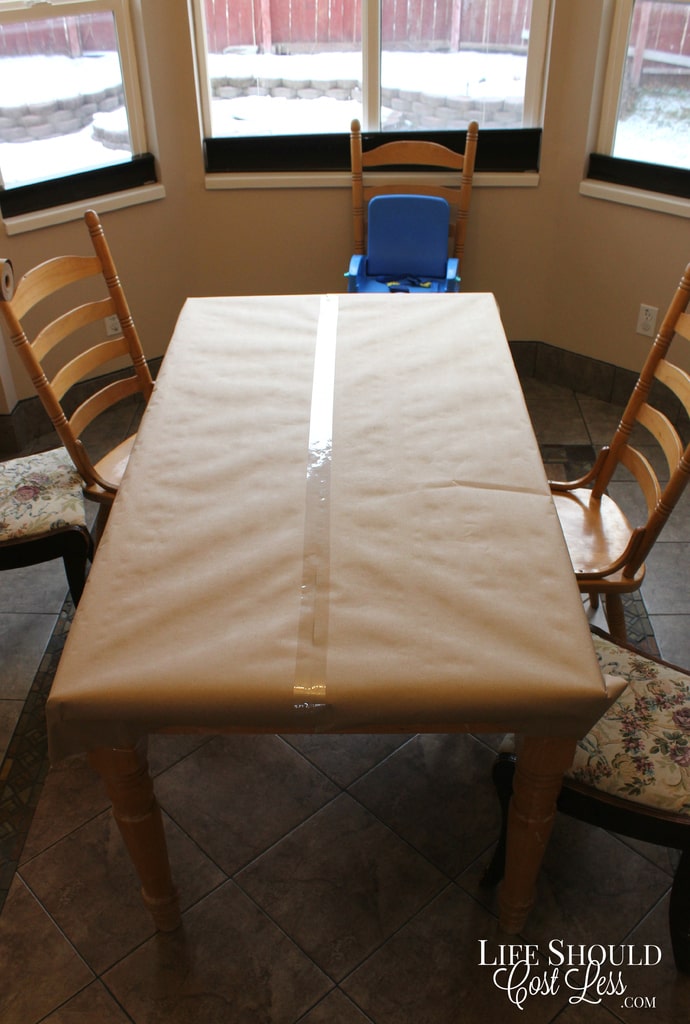 We were having dinner first, so I put my regular table cloth over the paper, to be removed just prior to the fun. After the fun you just roll it up and either compost it or trash it. 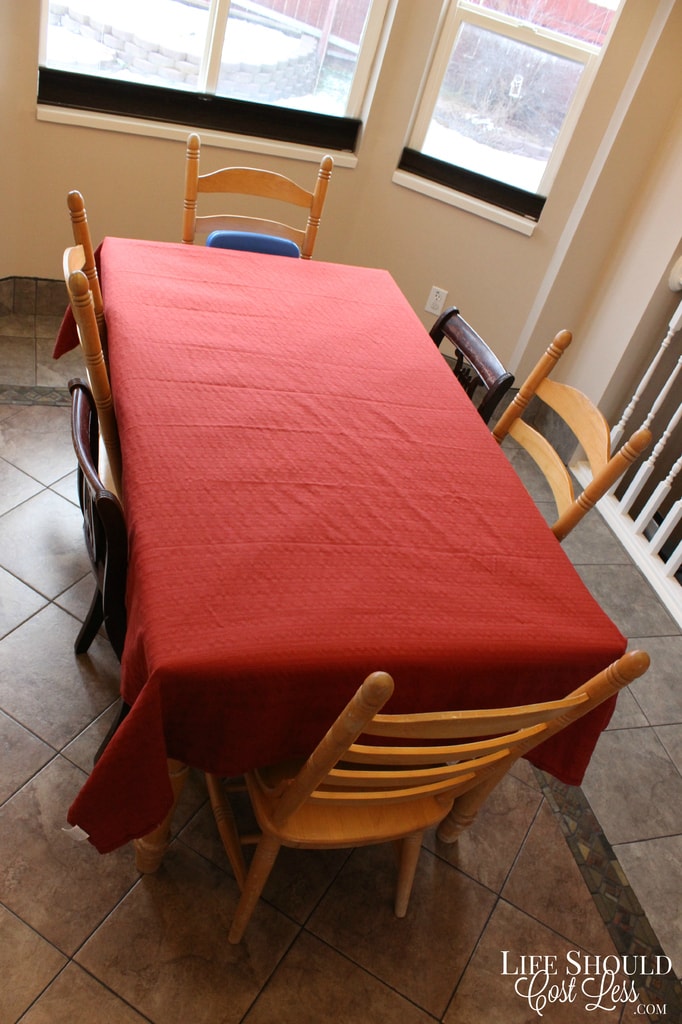 Here is a PRINTABLE LIST of the supplies I used this year. I’ve left a few spots so that additional items can be written in. I wanted to simplify this part not just for you all, but so that next year all I have to do is hit print, check my cupboards for what I already have (cross those items off the list) and head to the store…SIMPLE! (the icing was not shown, I knew I wouldn’t have time to make some so my MIL was sweet enough to bring some for me) 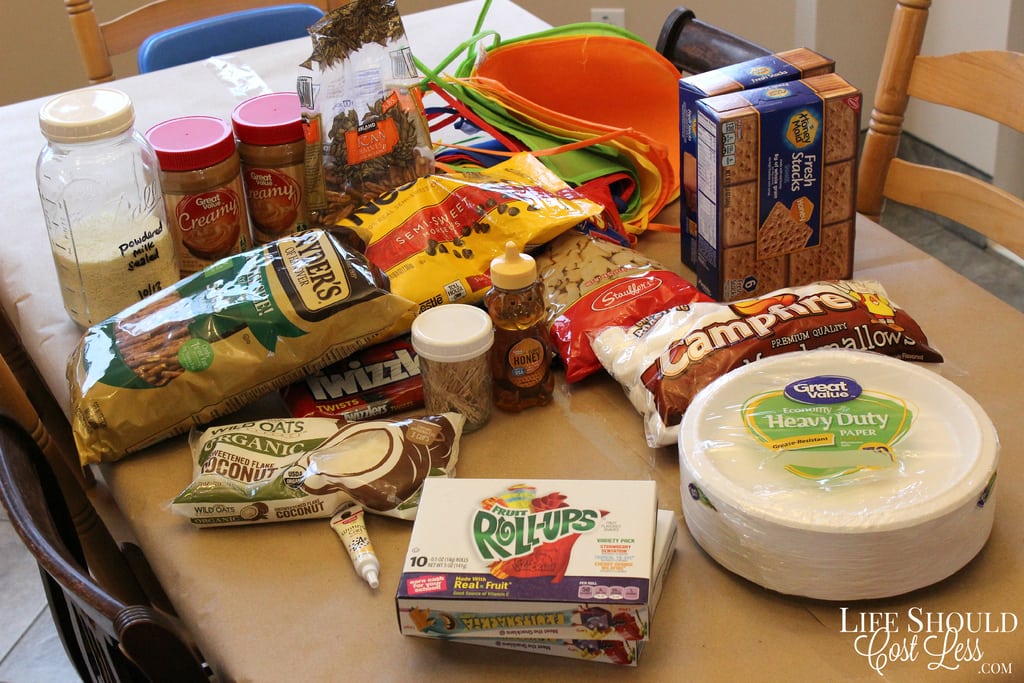 Getting everything ready to use was a task that I had my seven and five year olds do, and they did a great job! 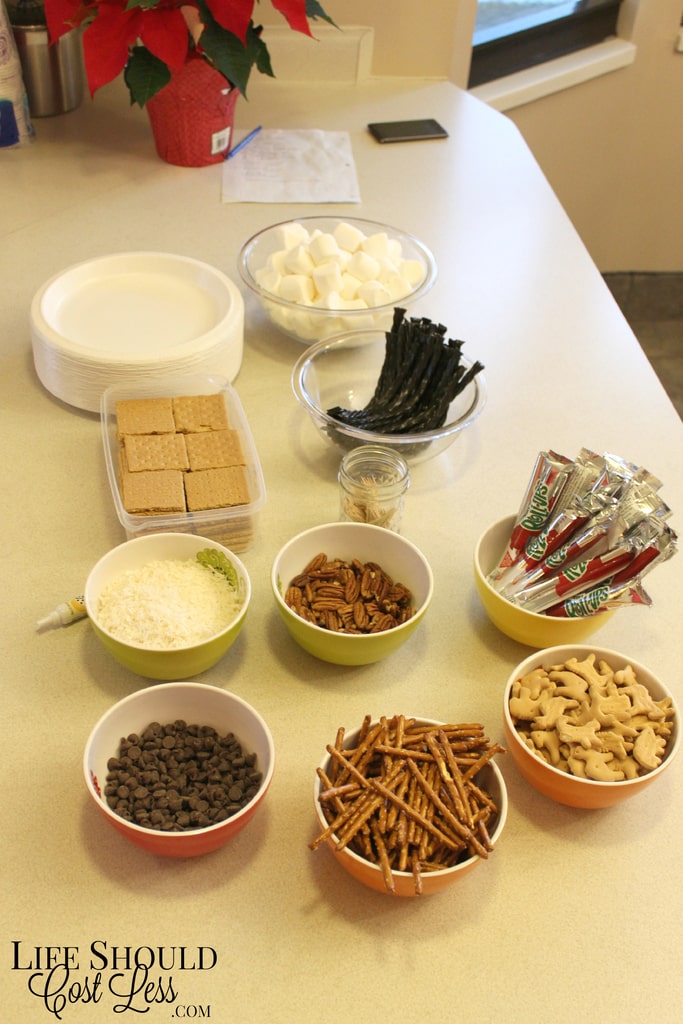 I didn’t realize that I had bought the kind of graham crackers that are squares instead of the large rectangles, so watch for that when you buy yours, it made it a little harder to put them together. 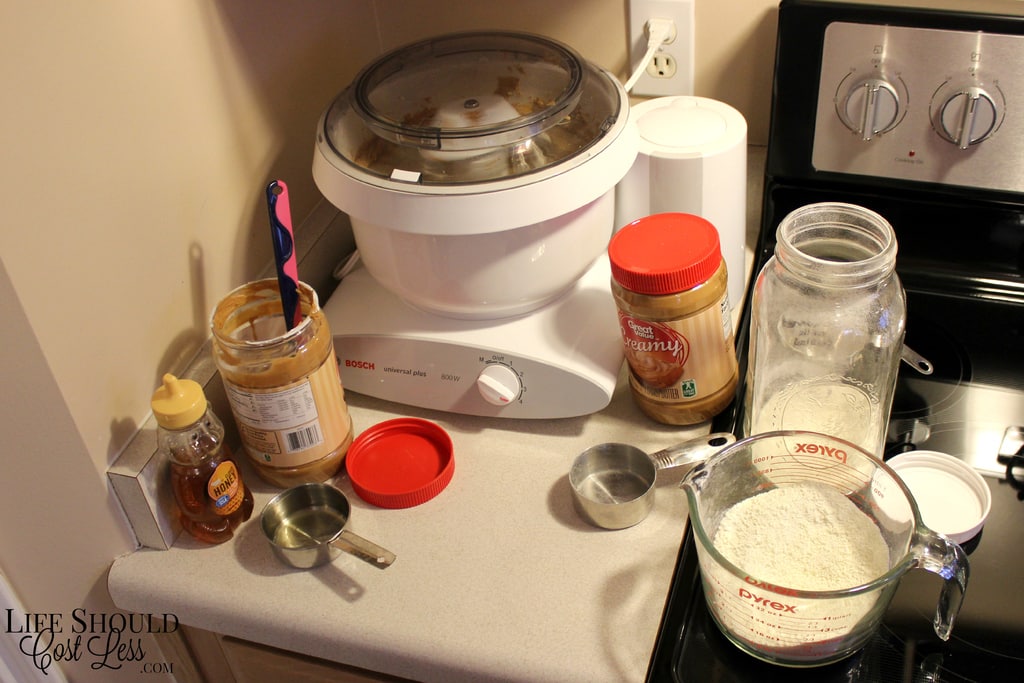 I decided I wanted to add my own twist to making edible Nativities and rather than using Gum drops to build the bodies, I thought it might be fun to make some peanut butter play dough for the kids to be able to sculpt the characters, or even a camel if they wanted. Here is where I got the recipe for the play dough I made this time, I 4X’d the recipe and it ended up being WAY too much (we had 8 or 9 kids making them) so next year I’ll only be doing a double batch. *I found that it was a bit runnier than I wanted it to be so I added some flour and mixed until it was the moldable texture that I wanted it to be.* The older kids got right to work, and the younger ones seems to have fun just playing with the play dough and munching on candy…which was my favorite part of making gingerbread houses as a kid.

The fun and some of the results: 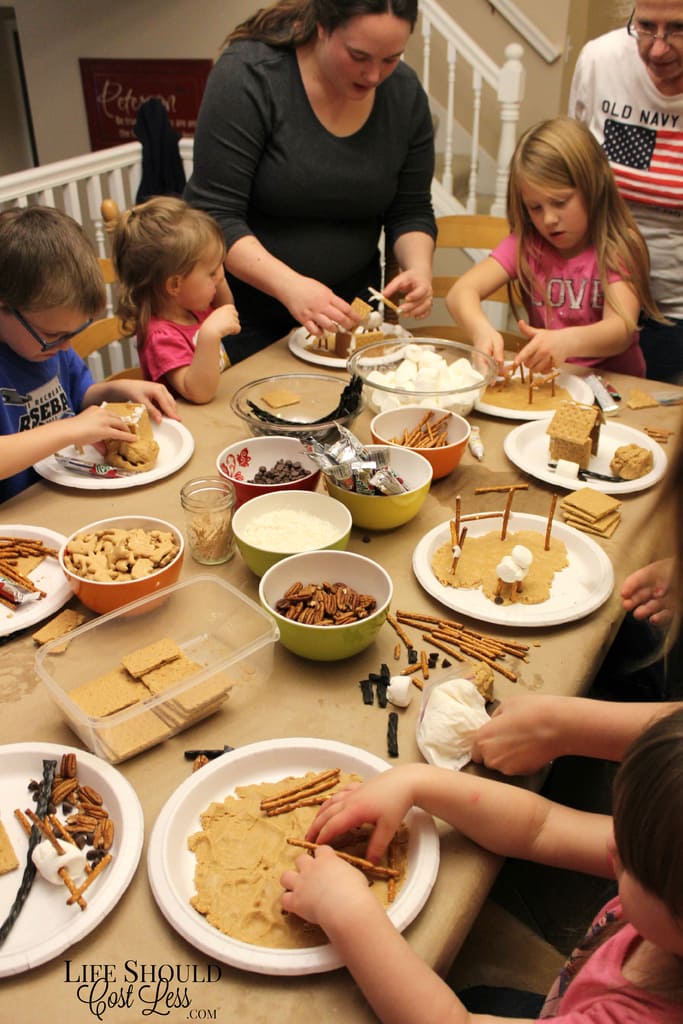 I never even thought about patting some of the play dough into the bottom of the plate, but several of them did this and it helped hold the structures together…very smart! 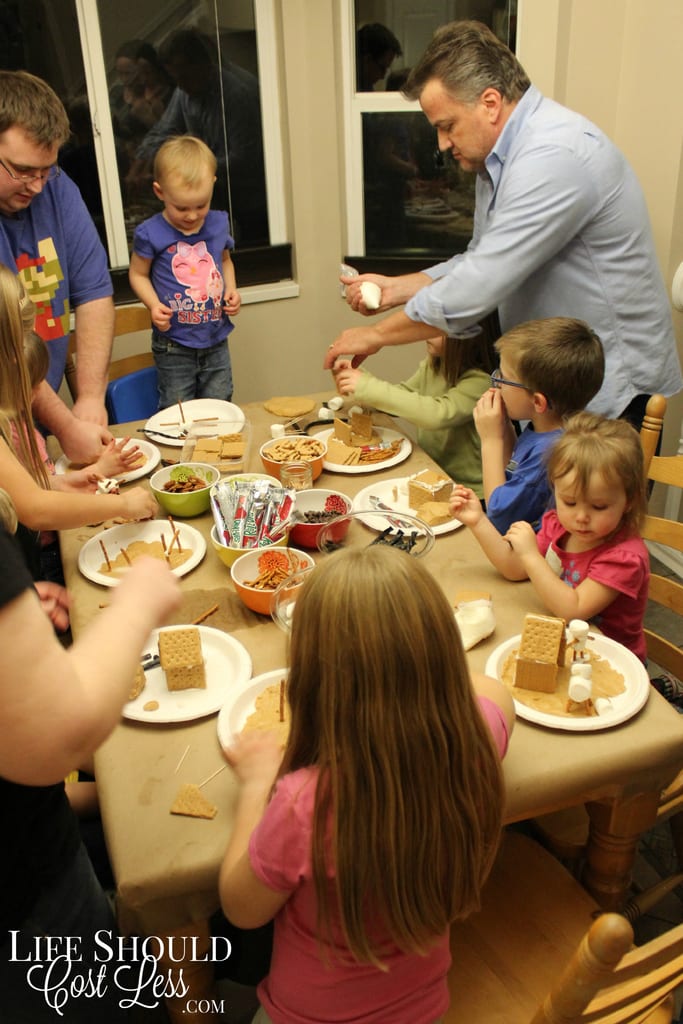 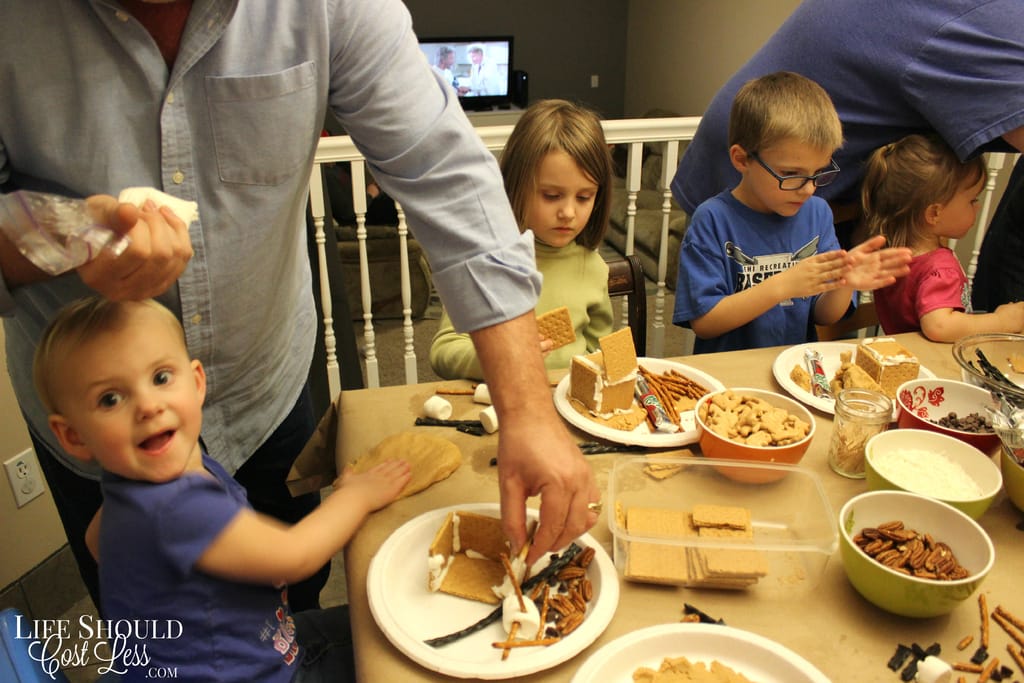 Grandpa was in charge of the icing. I’m sure it would have been much messier if he hadn’t. I offered to let the kids use smocks, but they didn’t really make that big of a mess.  Notice what we were watching in the background?

It was mostly for those that didn’t want to participate. Having Christmas music would have been nice, but I don’t think I could have handled that much noise. 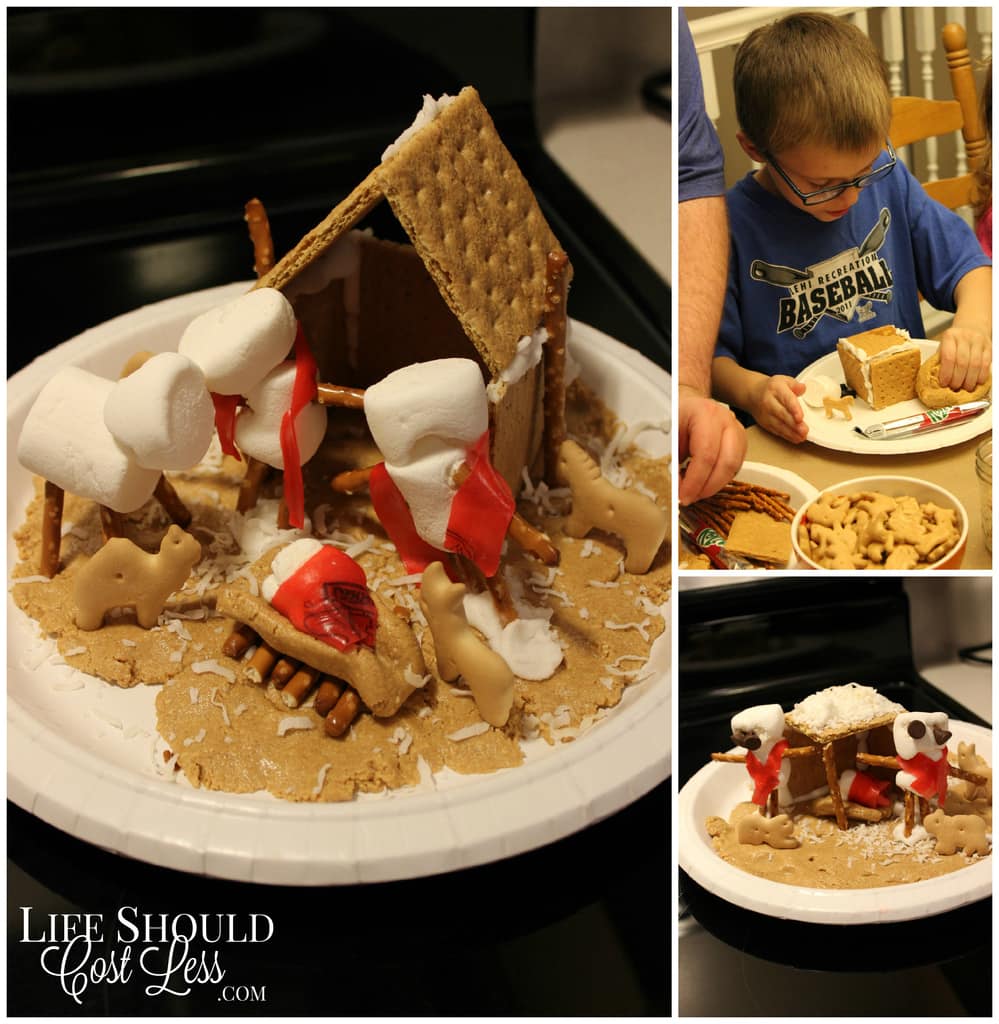 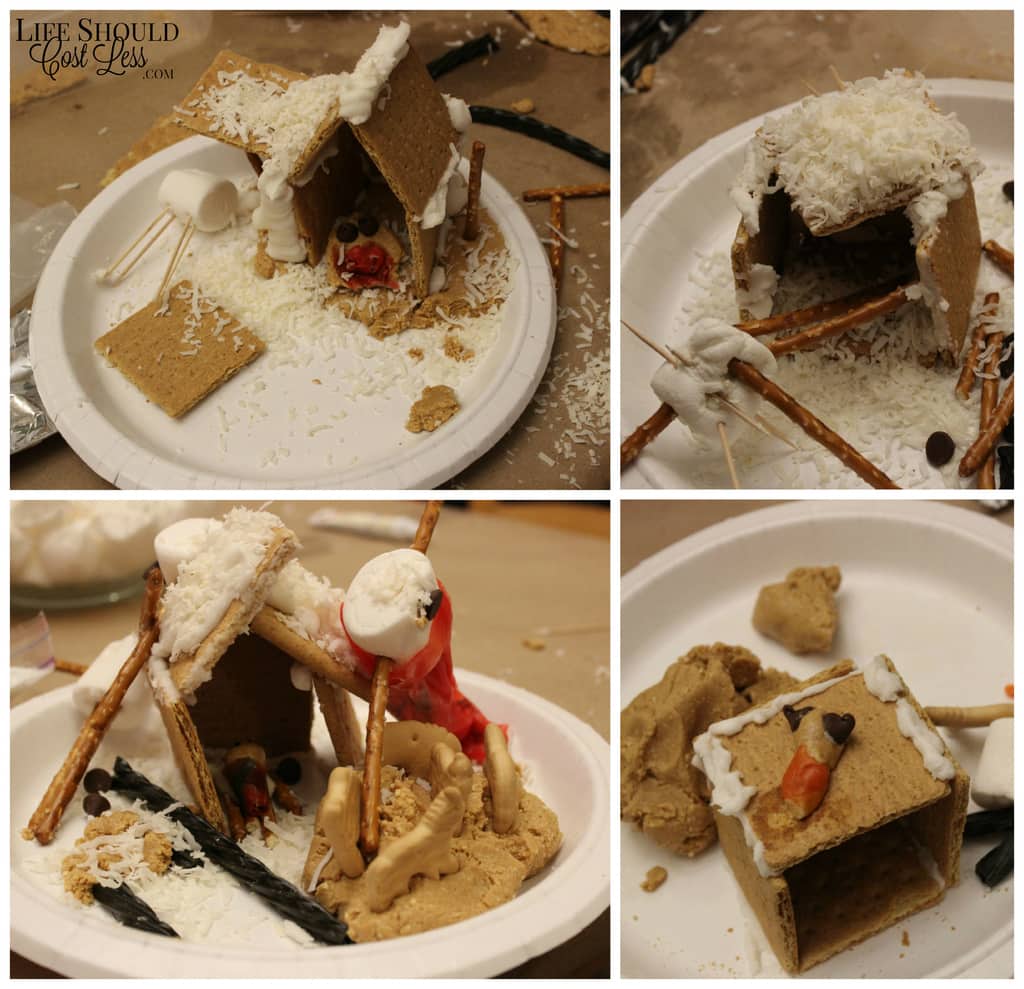 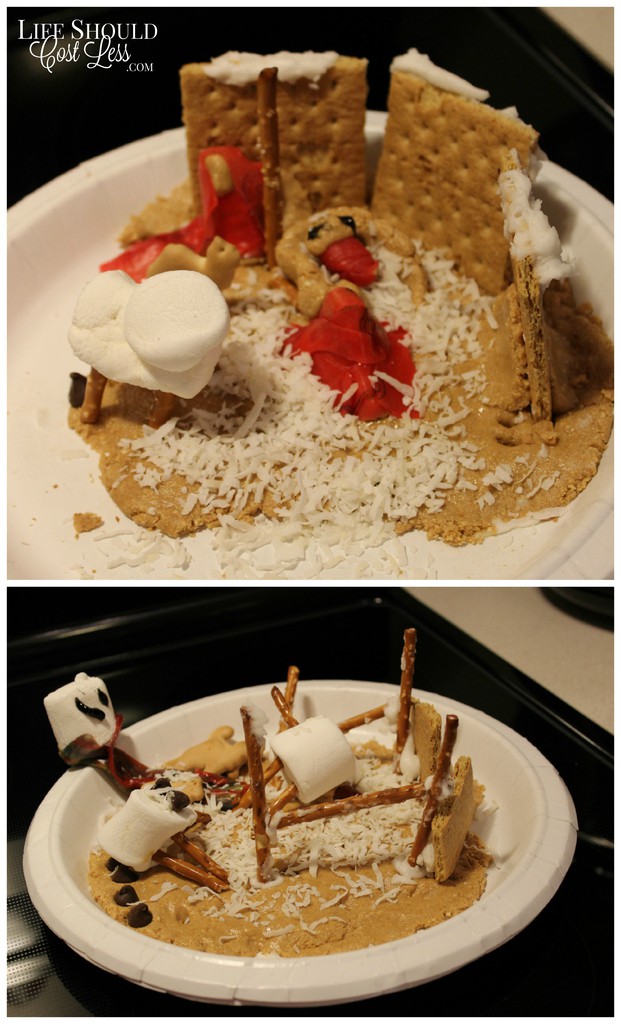 In case you missed it and would like a chuckle…notice how correct the kids made the sheep…yes there would have been poop in the stable. 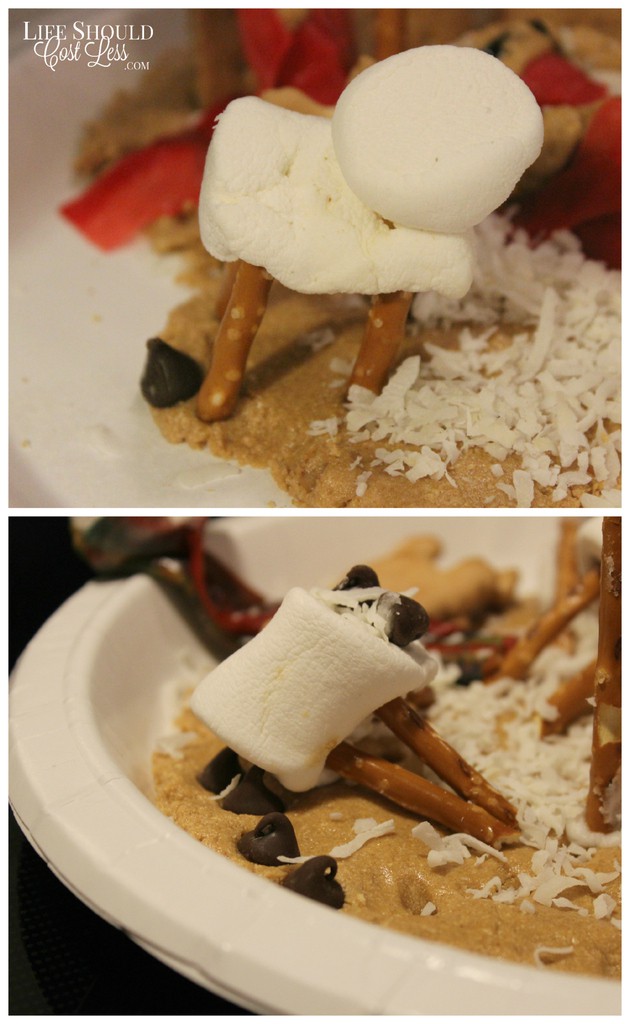 What I am going to do differently next year:

I forgot to mention how much this all cost. The supplies used were between $55 & $65 USD (I cheaped out on the peanut butter and honey knowing they were most likely going to play with it instead of eating it, I normally buy Raw Honey and Natural Peanut Butter so that saved some money), some items were on hand already but I did try to add that into the total to give you an idea on how much to budget. I suggest that if you’re going to do a Nativity making party to divide up all the ingredients and have everyone bring a few things. Then it’ll be less than $20 each depending on how many people are bringing stuff. 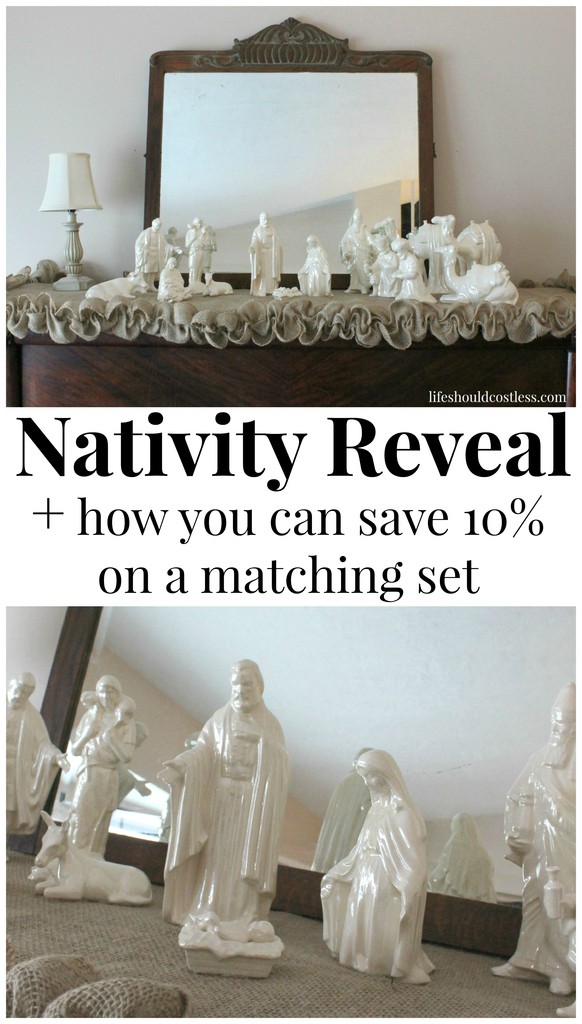 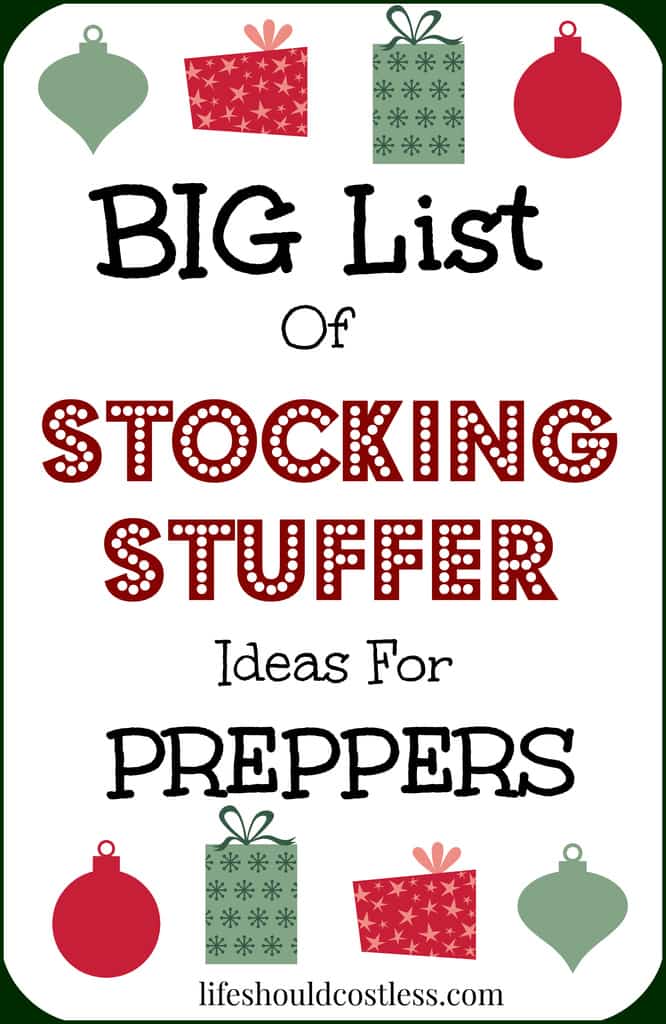 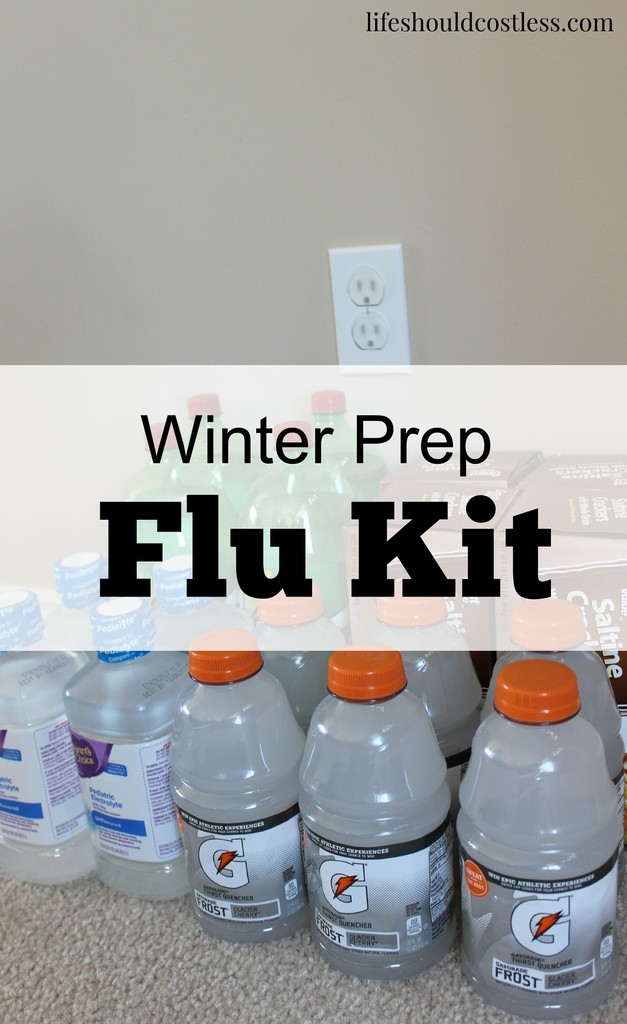