Skip to Content
A couple of months ago I decided that it was high time to give our front door a little face-lift. It has been needing some major help and as you scroll down to see the close-ups you’ll see why. I thought that it would be a fun idea to see just how far I could stretch a budget while doing it, so I’m sharing my results. Some people may think that $100 is a lot to work with, while others are wondering how that would even be possible because they spend $100+ on a wreath alone, how could I possibly transform a door so inexpensively?..lol. I’m just being silly, but I do want to show you all how I stretched that $100 to address the biggest issues that I had with our front door. My goal was to create some curb appeal and show a bit of my taste while I was at it.

Let’s start out with what I didn’t like about it. It’s a pretty door to begin with…don’t get me wrong. It just did not match the rest of the house at all. 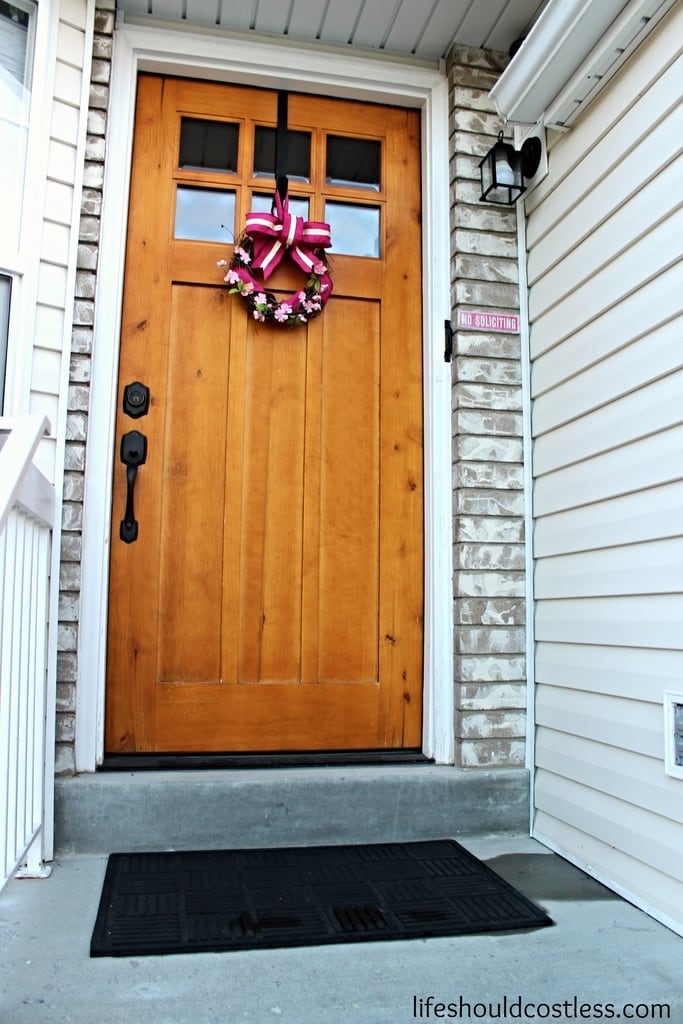 Between the camera (not viewable in these shots),electrical taped nasty old door bell, and the kind of No Soliciting sign that should only ever be on a business, this front door was about as welcoming as a prison. 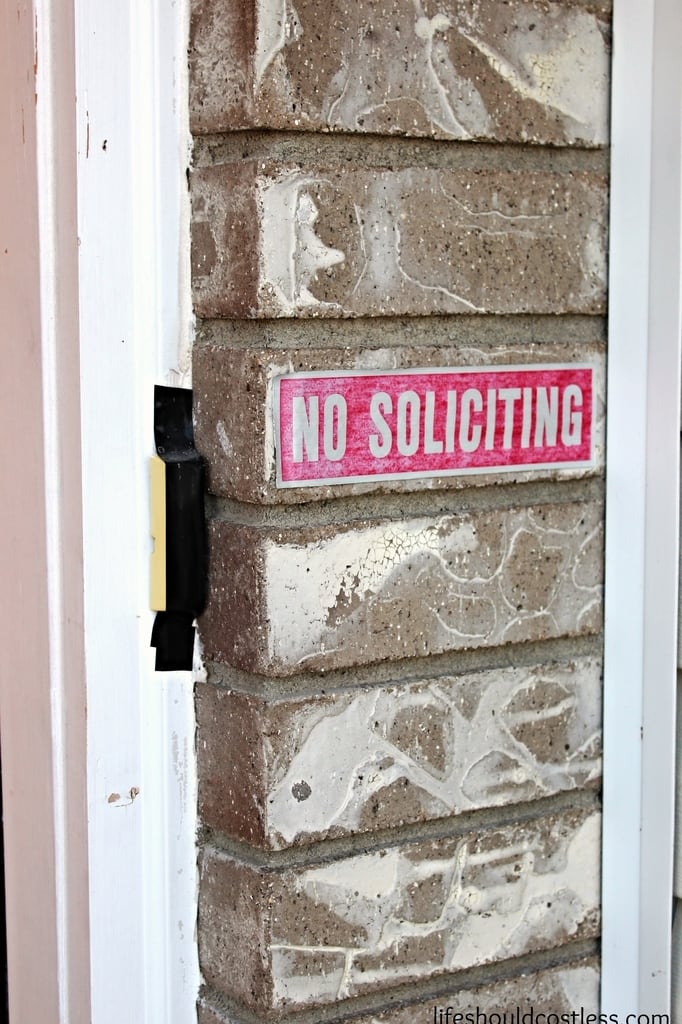 I always want to be able to hang wreaths on my front door, I just don’t like this kind of hanger that leaves the wreath hanging almost half way down the door and they wiggle around damaging the door and door jam while they’re at it. 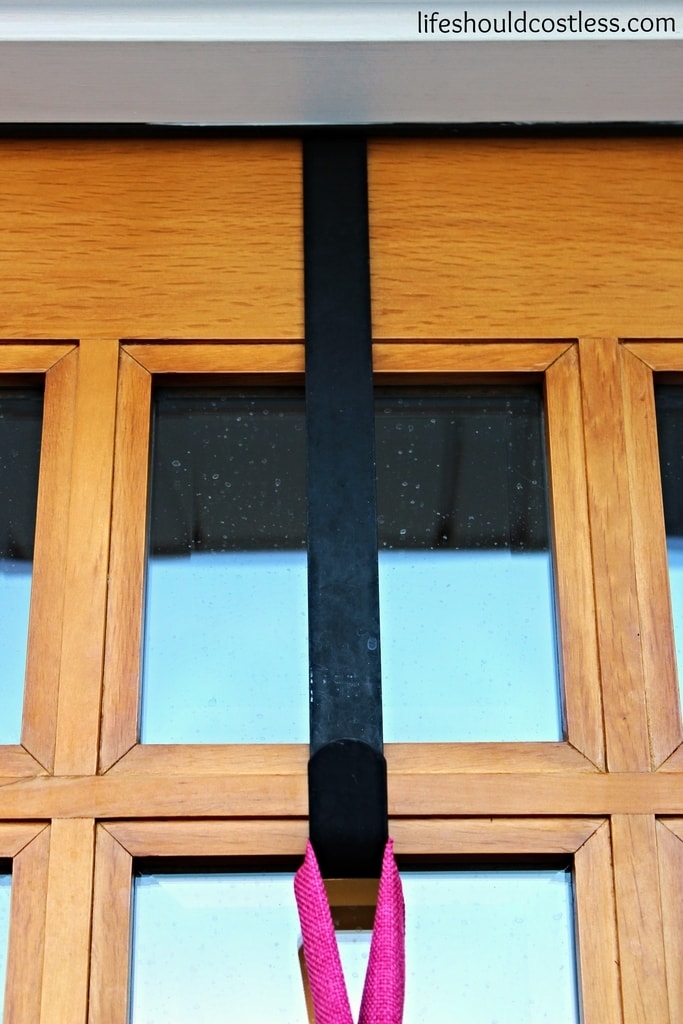 This dirty looking(even though I washed it before these “before” shots) mat is also ready to retire. 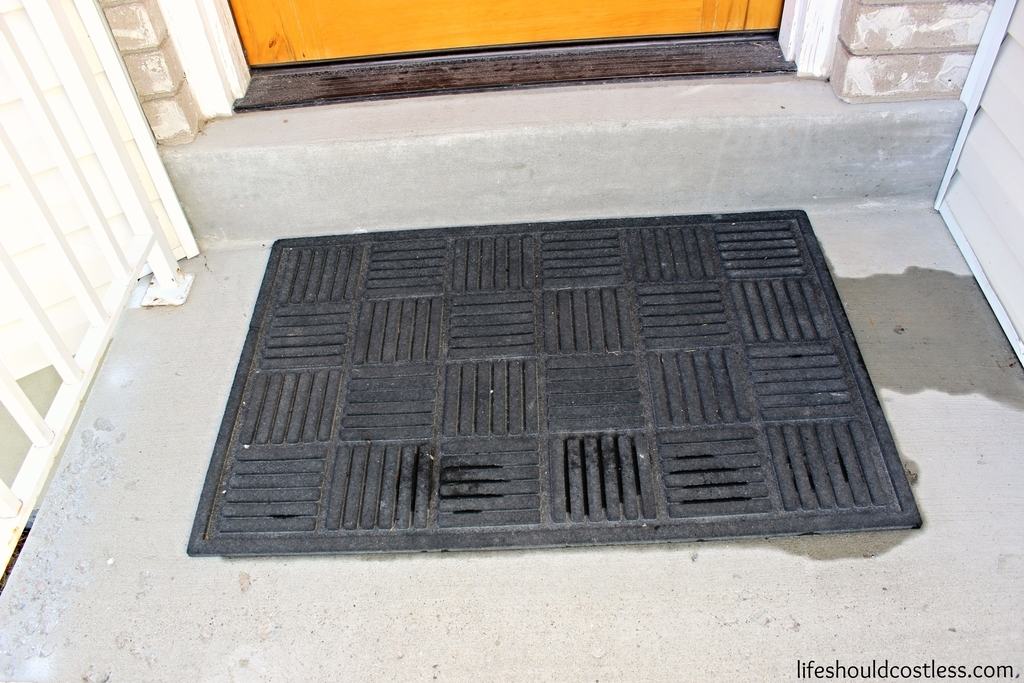 So what did I end up doing to solve these issues? First I decided to tape off, sand, and paint the door and jam. As I was trying to determine what color to use, I read somewhere to take the paint chip outside and hold it up to the brick. That got me down to two colors that I liked best and my husband suggested that I go with the lighter one…I’m sure glad I did, because it looks SO much darker than it did on the swatch. In case you’re wondering, the paint color I used is called Creek Bend from Behr Premium. It was just under $22 and only took about half of the quart that I bought. 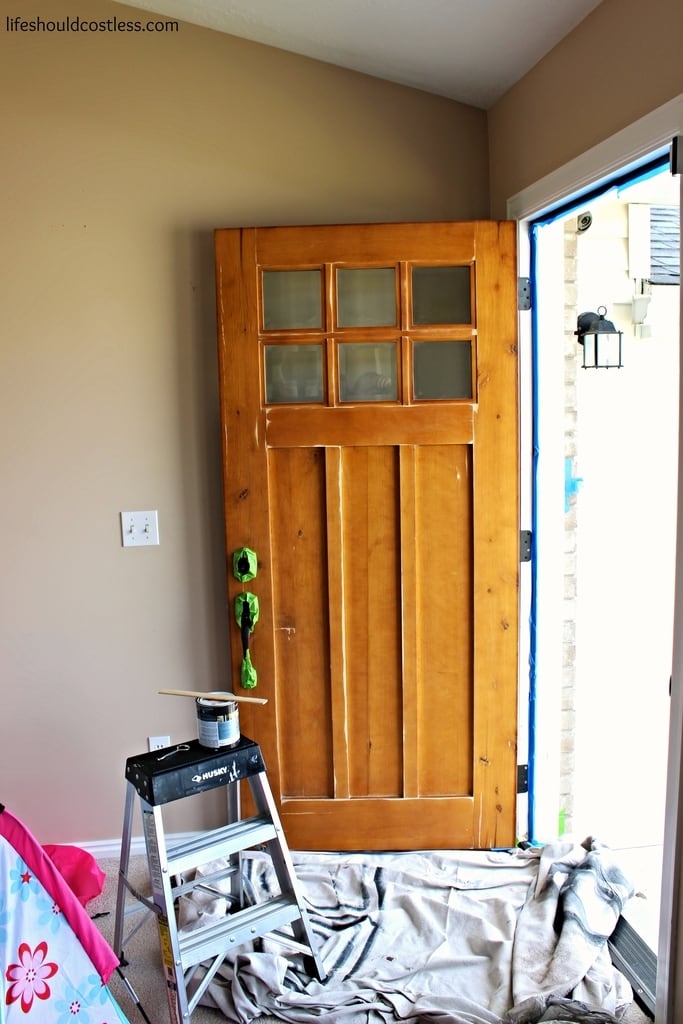 It took two coats and a little touching up. I cleaned up the glass with a razor blade just like on my previous post The Non-Toxic Way To Remove Hard Water From Windows. 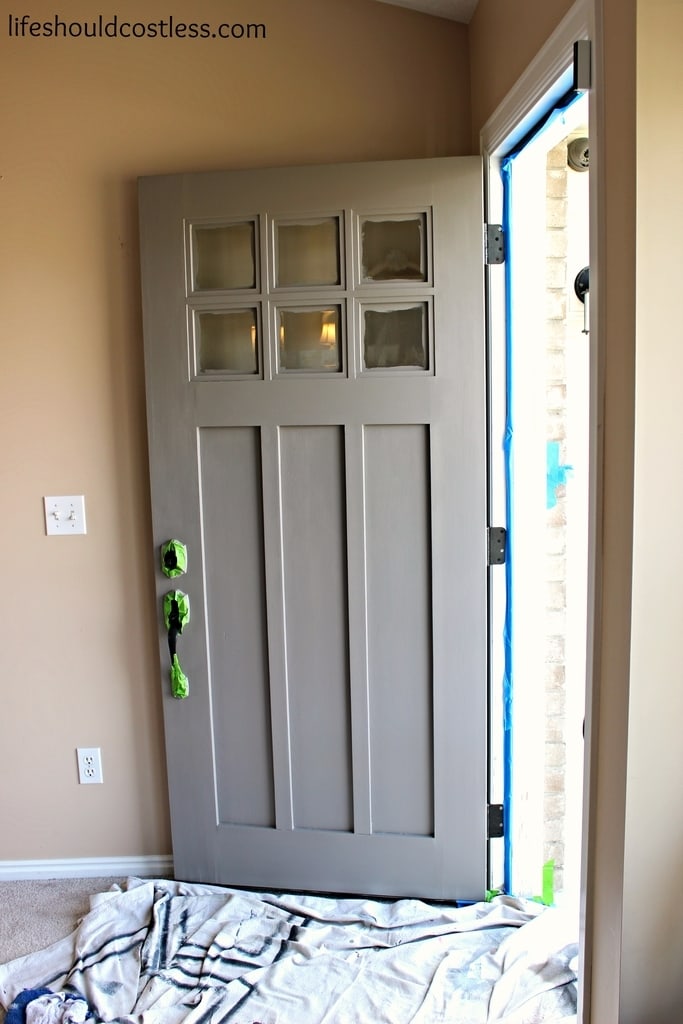 After I let the paint cure for a few days, I swapped out the old door bell. Since it was broken and taped over when we moved in, there was no way to know whether or not the chime part worked so I decided to just do this fix and then see if the chime works…and it doesn’t so that’ll be something else to fix later. This doorbell

was the least expensive but best looking oil rubbed bronze one that I could find and it was a little under $11. Which brings my total so far to about $33. 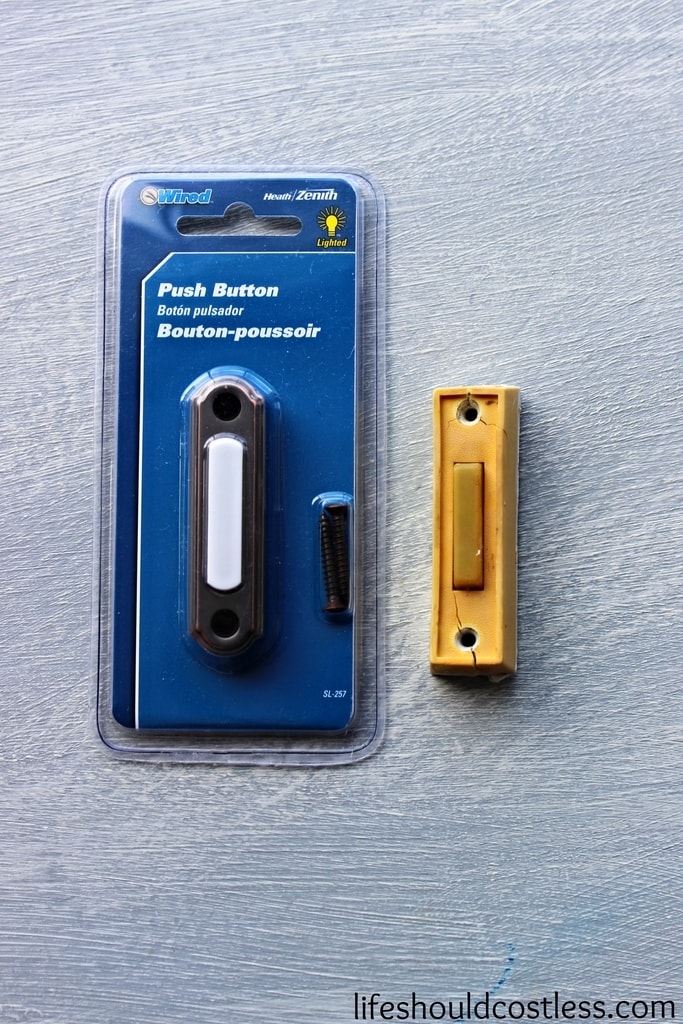 Its been really hard making new friends since we moved as I’m always taking care of kids, so I hope that my “rude” No Soliciting sign doesn’t scare away any new friends. My husband hates it because we always want to be as generous as possible (that is the biggest reason I blog, I can’t serve others as much as I’d like because of the kids, so I feel that teaching people to live within their means is my way of doing some good in the world until the kids are older and we can do more service as a family) and he’s worried that it sends the wrong message…to which I replied that I am the one home with the kids all day and it’s not worth the risk of opening the door to a potential threat when I am supposed to be protecting them all while he’s at work.
I had this plaque left over from when I did my “Coat Closet Turned Pretty Second Pantry & Coat Closet” post, but I’m still counting how much it was in the $100. I used some paint and a clear coat that I had on hand so that was free. The plaque, found here

, was $6, I round up because of tax. The vinyl was done by my awesome friend Hannah who was patient with me even though I was in a major rush. She gave me the friend discount and it was $10. It would have looked even better if I had had the time to have her attach the vinyl to the plaque, but I sat for a couple of hours (that night) and separated it and it was the best I could do…not too terrible considering it was my first time working with vinyl and those letters were teeny. I didn’t want to make any holes in my house or the plaque, so I used some industrial strength velcro ($4 ) to attach it, found here 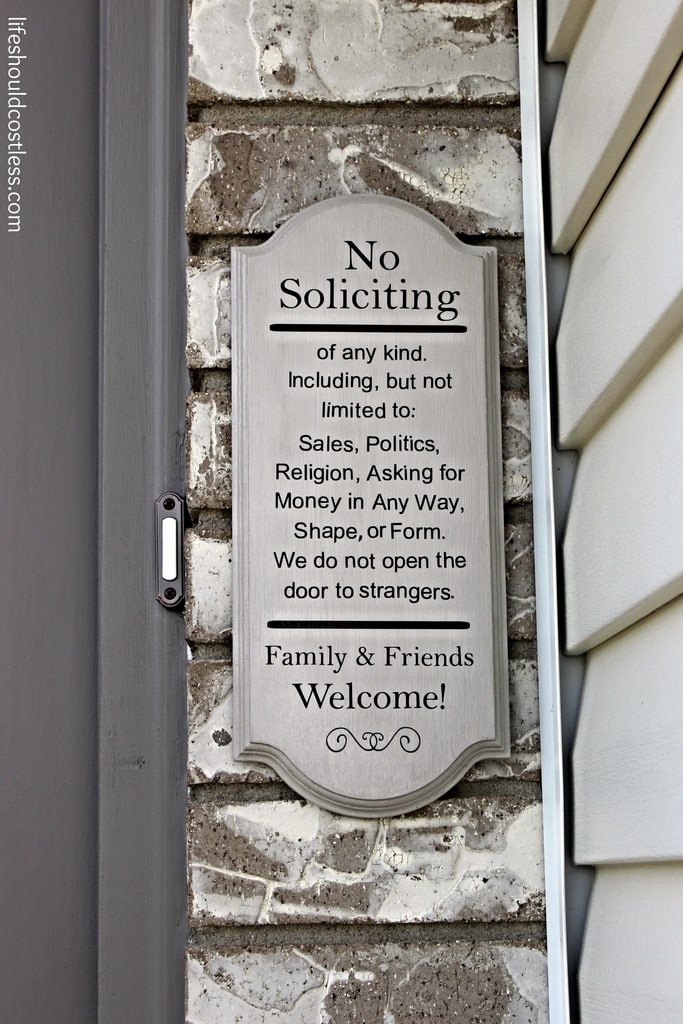 The over the door wreath hanger had to go, so I was able to find a hook that I liked that would just mount to the door and has been working just fine. I put it just above the glass so that the wreaths will provide a bit more privacy over the windows. This also seems to accentuate just how small my current wreath is, so I’ll be making much larger wreaths in the future. The hook ($5) actually came in a two pack (the product says 1 pack, but there are two in there), found here

, but it is not even close to the right color so I used some Oil Rubbed Bronze Spray Paint

(already on hand) and fixed that. Easy Peasy.  This brings the total up to $58. *One extra note is that it seems to be a great sized hook and I think the ball on the end will actually help keep the wreaths from falling off during a storm* 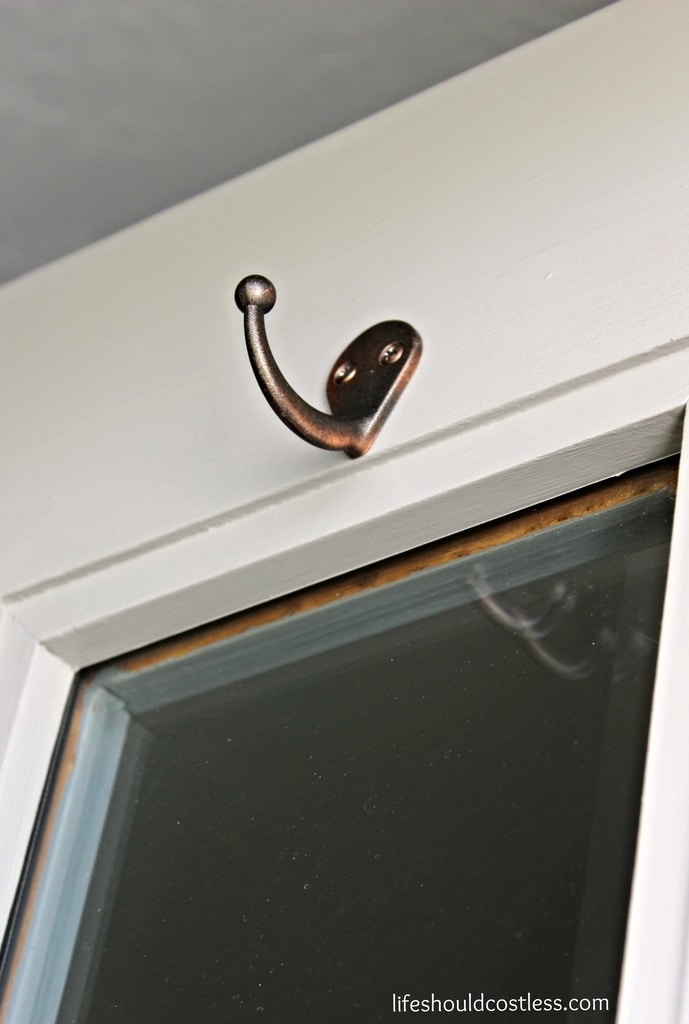 I purchased two of these planters at the DI, a while back, for $2/each and was really happy to finally have a purpose for one of them. I painted one (the one on the right obviously, but they both looked that gross before) with the same paint and clear coat that I used for the plaque. I added some potting soil ($5) and pansies($6) for a nice touch. I let one of my kids pick out the flower color. Not exactly what I would have used, but it made her happy to help out and really isn’t going to matter in the long-run. This brings our total to $71. 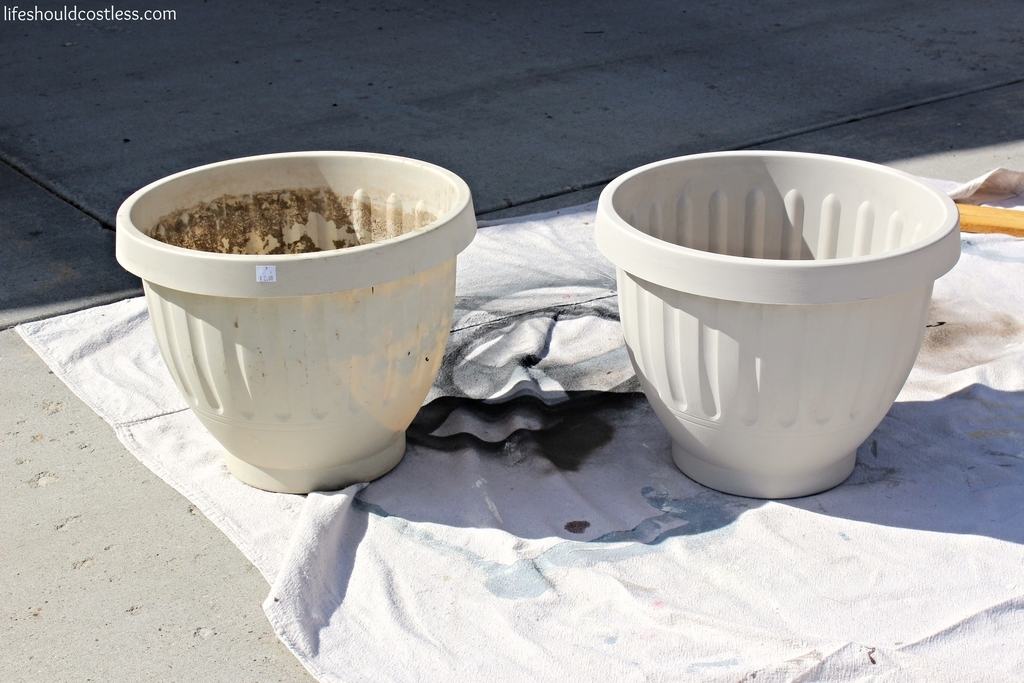 I was hoping to find a mat that would have a little curve to it so that the planter would fit on our little landing a bit better, and was happy to find this one at Costco for $14 (including tax). They actually have it in two colors, but this one matched best. My old mat became my new mat for our camping gear…bonus! This was the finishing touch and brings my grand total to $85… which mean I definitely met my goal of keeping it under $100. 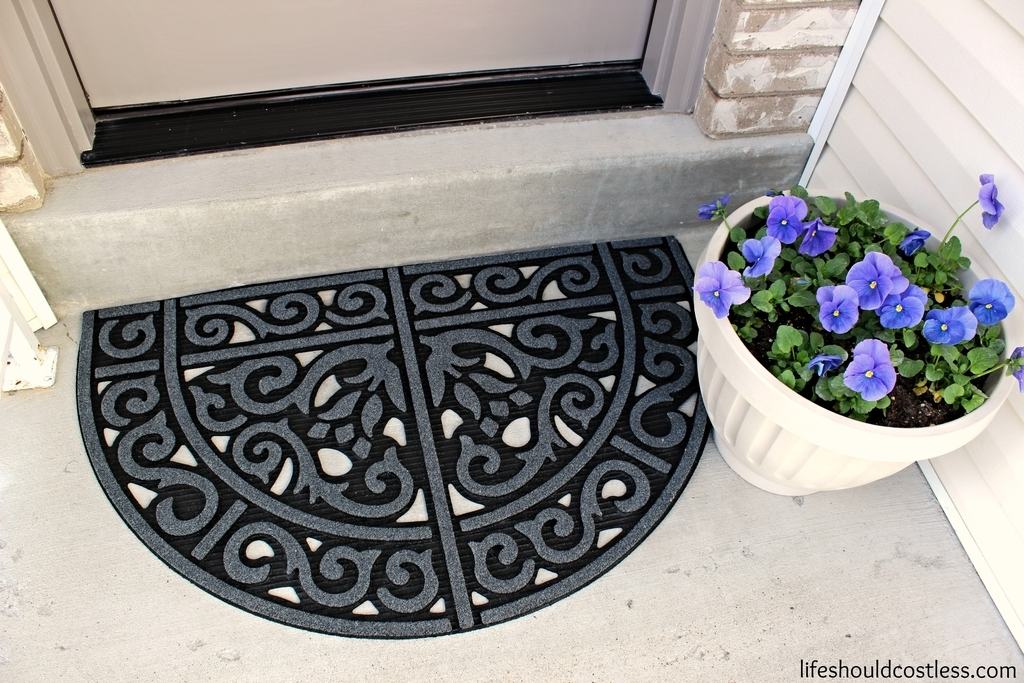 So, minus some paint splotches peeking out in a few spots on the draft guard and black thing across the bottom (a gift from the previous owners ;), and the light fixture still needing to get swapped out, I’m pretty happy with it. The paint color matches much better than the light wood did and it’s feeling more homey, less prisony…as if that’s a word, but hopefully you know what I mean. 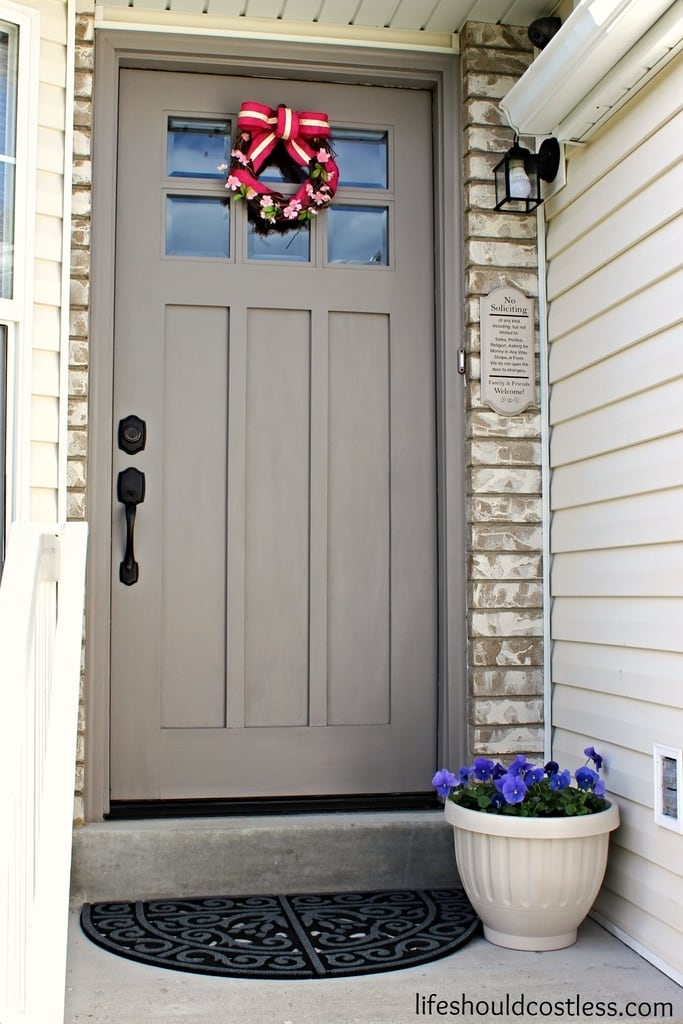 I wanted to turn this into a contest to see how well everyone else can stretch $100, but I really don’t know how many people would actually take part, so I guess it’s just a challenge to myself. However, feel free to send me your results and if I like it, I may just share it on the site.
I hope I gave you some ideas to improve your home without hurting your bank account. If you liked it, please make sure to share this post and don’t forget to follow along on social media (over there on the side-bar). ~Sarah
You may also like: 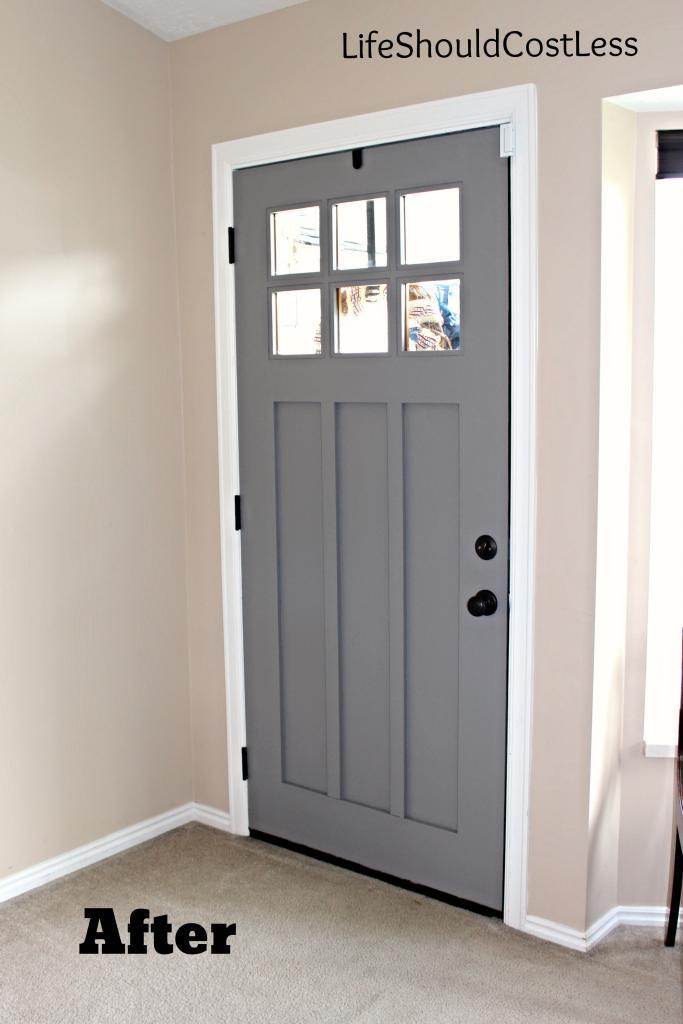 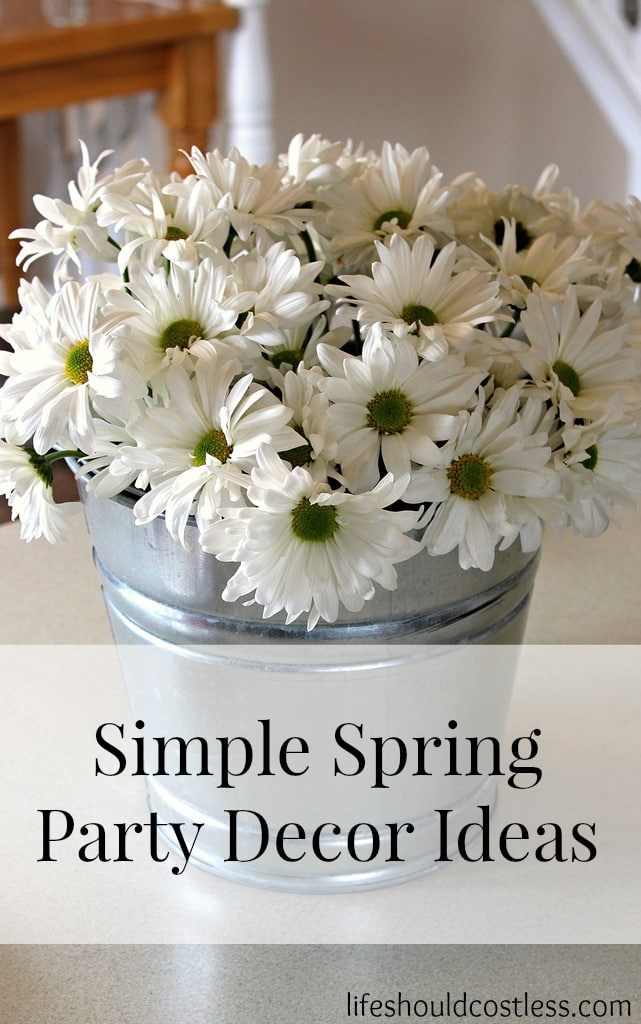